Barack Obama revealed his choices for several energy posts this week, including Nobel laureate physicist Steven Chu for energy secretary. Darren Samuelsohn, senior reporter for Greenwire, analyzes the picks and what the appointments may mean for future environmental policy. 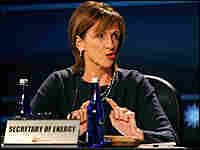 In November 2007, Carol Browner played the role of energy secretary in a discussion between former military and political leaders during a mock global energy crisis. Chip Somodevilla/Getty Images hide caption 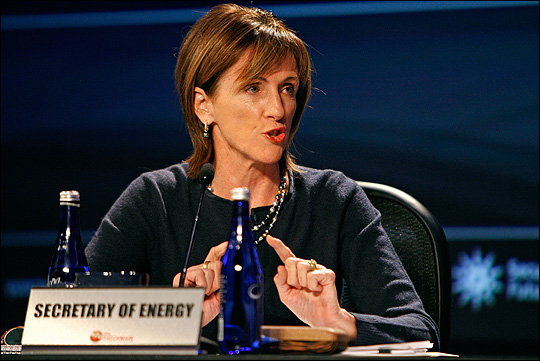 In November 2007, Carol Browner played the role of energy secretary in a discussion between former military and political leaders during a mock global energy crisis.

Steven Chu, a renowned physicist and green-energy advocate, has reportedly been tapped by President-elect Barack Obama to run the federal Department of Energy. Chu runs the DOE's Lawrence Berkeley National Laboratory in California, and he has made climate change the new centerpiece of his career.

Chu's resume contains an item never before seen on a DOE director's CV: a Nobel Prize in physics. Chu, who comes from an immigrant family of scientists, shared the prize with two other physicists in 1997.

His contribution was an ingenious set of experiments that captured atoms in different kinds of "atom traps." He created the traps by firing lasers at right angles to each other. The laser light functioned as a sort of "optical molasses," according to the Nobel committee. Individual atoms slowed down within the laser beams, enough so that scientists could study their inner structure.

Chu did most of that work at AT&T Bell Laboratories in New Jersey. He went from there to a research position at Stanford University, then took over the Lawrence Berkeley lab in 2004. He is also a professor at the University of California, Berkeley.

Lab staff declined to comment on the choice of Chu for DOE. News agencies have cited sources at the Obama transition team as confirming his selection.

Scientists in the energy field have watched Chu's star rise over the past few years as he turned the lab toward research in new forms of low-carbon energy.

"Steve has given the lab clear and innovative direction. He has taken the lab's strength in energy efficiency ... and pushed it along the whole spectrum, from basic to applied science," says Dan Kammen, a physicist and energy analyst at UC, Berkeley.

And having a Nobel laureate running DOE, Kammen adds, "is a neat sign for science."

Chu has turned his attention in the past few years to building financial support for alternative energy research. He helped win half a billion dollars from British Petroleum to fund an Energy Biosciences Institute, which focuses research at several institutions, including his lab, on producing biofuels from plant materials. In fact, some of Chu's earlier work in physics applied techniques similar to atom-trapping to biological materials such as DNA.

Chu has used his reputation to urge action to slow global warming. In a PBS news program last year, he said it was his obligation.

"In the last five or six years," he said, "I was following this as an interested citizen. And it became more and more apparent to me that the dangers, the potential risks of climate change were looking like they were more and more likely, and that ... as a scientist, a responsible scientist, you really have to think of what you can do to help with this problem."

Chu also established the Helios Center within the Berkeley lab, aimed at research on new fuels for transportation. These include making biofuels from biomass, using algae in fermentation tanks to make fuel, and applying solar energy to convert water and carbon dioxide to fuels.

The Department of Energy is the leading supporter of energy research within the federal government. As director, Chu will have to grapple with powerful supporters of coal, who have backed new DOE research on turning coal into liquid fuel. The department has also dedicated tens of millions of dollars to designing new power plants that capture carbon dioxide from coal before turning it into a gas to make electricity.

Much of coal's future — it currently is used to make about half the country's electricity — depends on research funded by DOE on how to bury that captured carbon dioxide so it won't rise into the atmosphere and contribute to global warming.

A major part of DOE's budget is dedicated to nuclear weapons research and maintaining the military's nuclear arsenal. Among the biggest tasks facing the agency is disposing of nuclear waste from civilian power plants and government weapons labs around the country.

The leading candidate for a dump site, Yucca Mountain in Nevada, has been mired in technical and legal debate for years and is decades behind schedule.