Accessibility links
Military Plans New Supply Lines Into Afghanistan The current route to the country, which runs through Pakistan, has become a chokehold for American supplies as convoys come under attack. With an influx of 20,000 additional troops planned for next year, the military is plotting out alternate supply routes that will enter Afghanistan from the north.

The third of a three-part series on the American military strategy in Afghanistan. 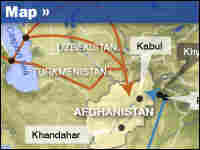 The U.S. military is planning new supply lines that will enter Afghanistan from the north. Lindsay Mangum/NPR hide caption 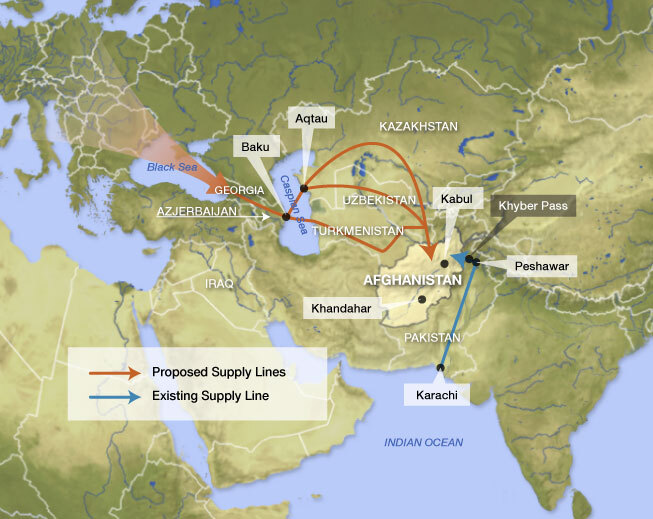 The U.S. military is planning new supply lines that will enter Afghanistan from the north.

Just last week in Pakistan, there was another attack on NATO convoys heading to Afghanistan.

It was the third time a convoy was hit in the past four weeks along the road leading to the Khyber Pass. That ancient route for invading armies is now a chokehold for American supplies.

As thousands of additional combat troops head to Afghanistan, along with more air power — helicopters and heavily armed drones — the amount of supplies that need to be transported into the country is going to only increase.

"I've had a concern about this for months, and in that concern, we've worked pretty hard to develop options so that we're not tied to single-point failure," says Adm. Mike Mullen, chairman of the Joint Chiefs of Staff.

"Single-point failure" is military-speak for the fact that Americans rely on the Pakistan route for 85 percent to 90 percent of supplies — that's food, fuel and building materials. (The more sensitive military equipment — everything from guns and ammunition, armored Humvees and radios — travels into Afghanistan by cargo plane.)

So people like Rear Adm. Mark Harnitchek have been looking for other supply routes. Harnitchek works at the Pentagon's Transportation Command, which is responsible for moving supplies by land, sea and air.

The admiral has come up with two new supply routes, both of which come from the north into Afghanistan, not through Pakistan.

"So what we are looking at is a route through the Caucuses, which would be Eastern Europe, across the Black Sea, through Georgia, Azerbaijan," he says. "From the port of Baku, either to the port of Turkmenbashi or a port a little to the north in Kazakhstan called Aqtau, through either of those countries into Uzbekistan, southeast through Uzbekistan, and across the border at a place called Termiz." [View Map]

That's almost 3,000 miles. Harnitchek says NATO already has received approval from all the countries along the way.

"I'm looking at starting moving stuff, probably around the first of the year or so," he says.

That northern land route to Afghanistan, and a neighboring one he hopes will be approved by Christmas, is almost twice as long as the trip from Pakistan. But it's also safer, Harnitchek says. It's essentially part of the ancient Silk Road, and there's no need for patrolling U.S. troops.

"These are all commercial routes," Harnitchek says, "and it is our intention to have our cargo fall in with the normal flow of commerce that travels along these routes."

"First of all, strategically you plan to have alternate routes," says retired Lt. Gen. Gus Pagonis, who was in charge of supplies for the 1991 Persian Gulf War.

He says alternate routes shouldn't be in place before they are necessary. But now, the U.S. does need them and not only because of the attacks on supply lines in Pakistan. The additional 20,000 American troops heading into Afghanistan will need a lot more food, fuel and two-by-fours.

Maj. Gen. Michael Tucker, the deputy commander in Afghanistan, says all those building materials will go for things like housing and dining halls.

"There's a very huge building campaign that has already begun," Tucker says. "We're pushing dirt as we speak to prepare for arrival of these forces."

They are also preparing for a new, longer — and what officials say is a safer — supply route into the fight.