Accessibility links
A 'Francophonic' Take On Congolese Pop Though the Congolese music known as soukous was Africa's biggest pop-music style in the '70s and '80s, it only reached the U.S. in bits and pieces. But a new anthology by the musician known as Franco goes a long way toward completing the puzzle. 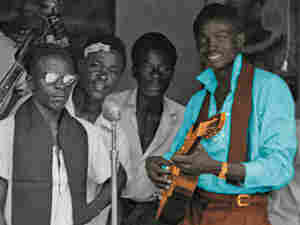 Francophonic contains recordings by Franco (right, in color) from 1953 to 1980. Courtesy of the artist hide caption

I love 21st-century music. Lil Wayne, Drive-By Truckers and TV on the Radio are all in my Top 10 albums of 2008. But I'm convinced that the very best music newly released in America in 2008 was recorded in Kinshasa, Congo (formerly known as Zaire), three and four decades ago by a man named Franco, the late king of Congolese rumba.

Although Congolese music is loved for its buoyancy, Franco himself rarely sounded light. His guitar was forthright and plangent, so as a bandleader, he hired many fleet-fingered guitarists — and also whole flocks of singers. Not that Franco was shy about singing. In the 1964 song "Bato Ya Mabe Batondi Mboka," four years after his nation's independence, he applies his declarative baritone to a prophetic lyric that translates: "Bad people fill this country / Schemers fill this country / They lay traps for their allies / Only later will we ask how they succeeded."

That song appears on Francophonic, a brand-new two-CD set that's the best showcase Franco has ever had anywhere. It starts in 1953 and ends in 1980, by which time Franco and his sweet-voiced Kinshasa rival Rochereau co-ruled the Congolese rumba style known as soukous. Though it was Africa's biggest pop-music style in the '70s and '80s, soukous only reached the U.S. in bits and pieces. Franco's new anthology goes a long way toward completing the puzzle.

In Franco's hands, soukous was too varied to sum up in one track, or on one double CD. In "Lisolo Ya Adamo Na Nzambe," a song about an argument between God and Adam, a lovely vocal duet kicks into an up-tempo chorus over guitars and horns, and is followed by a Franco shout.

Francophonic emphasizes the provocative spirit that helped make Franco a Congo hero — an African hero. But there's plenty of blatantly pretty and commercial Franco, too. The song "AZDA" was, in fact, a commercial for the Volkswagen dealership Azda. When the chorus sings "vay-way vay-way vay-way vay-way," they're saying VW as gorgeously as anyone has ever uttered those letters.