Accessibility links
A Priceless Lesson In Humility When a blind woman approached Felipe Morales, he assumed she wanted money — but all she really needed was directions. The incident reminded Morales about the risks of prejudging people and taught him a valuable lesson about humility in his own life.

Listen
A Priceless Lesson In Humility 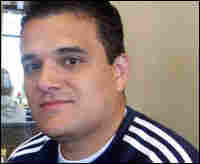 Network engineer Felipe Morales was born in Tegucigalpa, Honduras in 1974, and immigrated with his family to Tampa, Fla., in 1990. He now lives with his wife and children in Rowlett, Texas, where he enjoys playing and coaching soccer. Courtesy Felipe Morales hide caption

A few years ago, I took a sightseeing trip to Washington, D.C. I saw many of our nation's treasures, and I also saw a lot of our fellow citizens on the street — unfortunate ones, like panhandlers and homeless folks.

Standing outside the Ronald Reagan Center, I heard a voice say, "Can you help me?" When I turned around, I saw an elderly blind woman with her hand extended. In a natural reflex, I reached in to my pocket, pulled out all of my loose change and placed it on her hand without even looking at her. I was annoyed at being bothered by a beggar.

But the blind woman smiled and said, "I don't want your money. I just need help finding the post office."

In an instant, I realized what I had done. I acted with prejudice — I judged another person simply for what I assumed she had to be.

I hated what I saw in myself. This incident re-awakened my core belief. It reaffirmed that I believe in humility, even though I'd lost it for a moment.

The thing I had forgotten about myself is that I am an immigrant. I left Honduras and arrived in the U.S. at the age of 15. I started my new life with two suitcases, my brother and sister, and a strong, no-nonsense mother. Through the years, I have been a dishwasher, roofer, cashier, mechanic and pizza delivery driver among many other humble jobs, and eventually I became a network engineer.

In my own life, I have experienced many open acts of prejudice. I remember a time, at age 17 — I was a busboy, and I heard a father tell his little boy that if he did not do well in school, he would end up like me. I have also witnessed the same treatment of family and friends, so I know what it's like, and I should have known better.

But now, living in my American middle-class lifestyle, it is too easy to forget my past, to forget who I am and where I have been, and to lose sight of where I want to be going. That blind woman on the streets of Washington, D.C., cured me of my self-induced blindness. She reminded me of my belief in humility and to always keep my eyes and heart open.

By the way, I helped that lady to the post office. And in writing this essay, I hope to thank her for the priceless lesson.