Accessibility links
New England Housewares Chain Is Singing The Blues Bowl & Board, a family-owned chain of housewares stores in New England, is trying to boost its sales — and morale — with creative promotions. Despite drastic cost-cutting measures, sales are sinking. With the economy in recession, it's possible the chain may have to close at least two locations.

Bowl & Board owner Mark Giarrusso (left) reviews a packing slip while stocking new product at his Brookline, Mass., store with one of his employees, Shea Davis. Matt Teuten/Aurora Photos for NPR hide caption 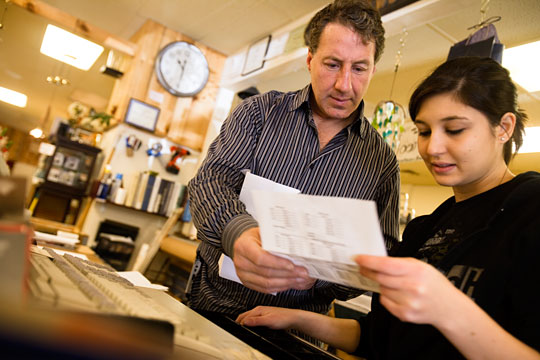 Bowl & Board owner Mark Giarrusso (left) reviews a packing slip while stocking new product at his Brookline, Mass., store with one of his employees, Shea Davis.

Bowl & Board owner Mark Giarrusso parks his delivery truck. Since business has slowed down, Giarrusso has had to take on additional roles to keep his business afloat. Matt Teuten/Aurora Photos for NPR hide caption 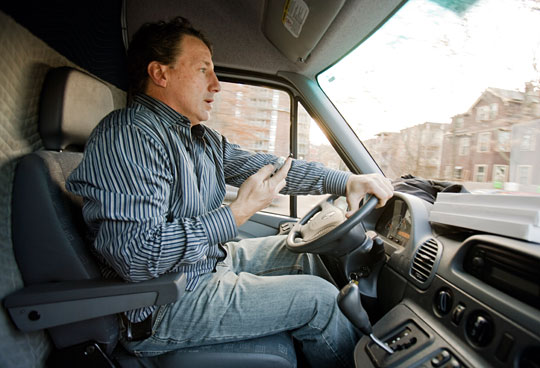 Bowl & Board owner Mark Giarrusso parks his delivery truck. Since business has slowed down, Giarrusso has had to take on additional roles to keep his business afloat.

Read how another small business in Texas is coping with the recession. 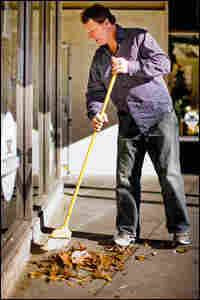 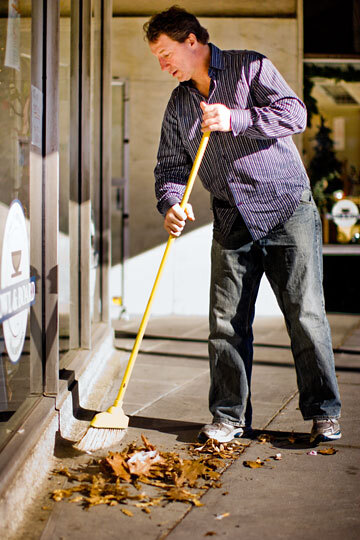 Mark Giarrusso sweeps in front of his Brookline, Mass., store.

Read other stories from this series:

Like many retailers, Mark Giarrusso didn't need the government to tell him the economy was in a recession. He could tell by what he calls his "shower curtain index."

"Our shower curtain business is like our canary in the coal mine," he says. "Because the first thing people need when they move into a new apartment is a shower curtain."

Giarrusso runs Bowl & Board, a family-owned chain of housewares stores in New England. The stores are strategically placed in high-traffic, high-turnover areas filled with young professionals. In a healthy economy, shower curtains have always sold by the hundreds. But a few months ago, he says, shower curtain sales took a nose dive.

"All of a sudden, it just froze. It stopped," says Giarrusso. "There's just no turnover. People aren't moving. They're scared. And it's like a heads-up. When shower curtains aren't selling anymore, I know everything else is going to slow down, too."

Giarrusso says it's the bleakest moment he can recall since his father opened the first Bowl & Board in Cambridge, Mass., which recently relocated to a location in Somerville that charges lower rent. The business became an institution in Harvard Square by selling its eclectic mix of earthy and trendy housewares. It spawned other stores in Massachusetts — in Brookline, Martha's Vineyard — as well as one in Providence, R.I.

Today, it's a totally different story.

"You just kind of stand around," says store manager Mara Delarossa. "It's hard to keep the energy going and stay motivated."

Giarrusso tries to compensate for the emptiness by pumping up the volume of music.

In an effort to boost sales — and morale — Giarrusso has launched a new promotion he calls the "Good News Sale."

"Anyone who comes in and shares a piece of good news can get 10 percent off their purchases," he explains. The happy headlines posted at the register include the following: "My brother-in-law is cancer free"; "My dog doesn't limp anymore"; "My bathroom scale broke"; and "Obama won!"

But the business news at Bowl & Board is bad. Sales have decreased by 30 percent. And Giarrusso has cut to the bone, reducing the number of employees and slashing health insurance. He's even started giving customers their purchases without a bag, figuring that'll save him about $20,000 a year.

But even with all of his cost cutting, Giarrusso is in trouble. He's seriously behind on rent at two of his three stores (his sister owns the fourth location). And he's late with payments to many of his vendors, who are now refusing to sell him more product until he pays up.

"We're at a very dangerous moment where our lack of inventory is starting to affect sales," he says.

Close The Doors Or Diversify?

The prospect of closing is one that has kept Giarrusso up at night. His Brookline store is hemorrhaging money. But Giarrusso doesn't even want to think about shuttering or shrinking the family business that his dad built from scratch.

"I've got five brothers and sisters to answer to — and my dad," he says. "Someone's got to keep Bowl & Board going."

Giarrusso is also trying to bolster business with custom orders. He's got a pile of them on his desk. One customer wants a butcher block cart cut 2 inches smaller; another wants electric lights installed in a glass cupboard.

A trained cabinet maker, Giarrusso can do it all in the shop he has set up in the basement of his store. It's a huge investment of time and energy, and something he would not have bothered with in previous years. But now, Giarrusso says he will do almost anything to make a sale.

As it gets closer to Christmas, however, Giarrusso's jaunty manner is starting to wane. The landlords have just raised his rent by 30 percent in Brookline, and he is locked into a four-year lease.

"They are charging too much money for what it is. Only a cell phone store could justify that kind of rent, or a bank. And the banks are the ones being bailed out. That's what's frustrating," he says.

Giarrusso has been trying to negotiate with his landlords, asking them to give him a break on the rent. But so far, they're unwilling to budge.

If the landlords don't cut him some slack, Giarrusso says, he will have to close right after Christmas. He has already told his real estate agent to start looking for another tenant to take over his lease.

Just outside his real estate agent's office, as if on cue, Giarrusso's BlackBerry buzzes with an e-mail that has been making the rounds in the retail business community: It's a list of several megachains who are all closing stores or filing for bankruptcy, including Ann Taylor, the Gap and Circuit City.

It distressing but, oddly, also reassuring for him.

"It makes me feel better," Giarrusso says. "Because, you know, you always think you did something wrong personally. You question yourself, and you're always wondering. But this tells me it's not just me."

Giarrusso is hoping the big box stores' closings will mean more customers for little guys like him, and that he'll be able to stay open. It may happen. But even Giarrusso says you wouldn't really want to bet the store on it.