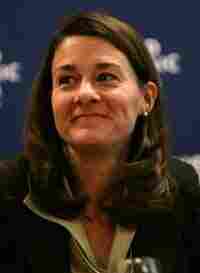 The Bill and Melinda Gates Foundation has put a new emphasis on education with its most recent charity initiative.

Robert Siegel spoke with Melinda Gates, co-chair of the world's largest philanthropic organization and wife of Microsoft founder Bill Gates, about the new $60 million initiative to ensure education reform has a prominent place in the coming presidential campaign.

The program, Strong American Schools, is a jointly funded effort with The Eli and Edythe Broad Foundation.

In her interview, Gates said that Americans don't talk about the fact that millions of students drop out of high school each year – and that number jumps 50 percent when looking at the African-American population.

Is the problem lack of awareness of the problem of school dropouts, or is it that people attribute that to the students and not to the schools?

I think it goes both ways. I think the Americans need to understand that a lot of times the children are bored in school, and that is why they are not staying in. But people don't realize that schools can do the right things to support students, that if the high expectations of students with great curriculum, if they are attracting and retaining the best teachers, if they are supporting the students in the schools, that there is a solution. It is fixable.

From the material that I have seen, Strong American Schools has no official stand on vouchers, on charter schools, on No Child Left Behind, or on any other bill in Congress. It sounds like you're going to be taking a – well, making a great effort to put the question to the public and to provoke answers. Why not, with all of the experience that you have from educational grants that you have made already, get behind and answer it?

Because I think it's more important to get the American people demanding of the presidential candidates that they address these issues. The thing that we are talking about is bigger than any specific one piece of bill or one legislation; it's having Americans rise up and say, 'Let's collectively do something about it; let's debate the issues; let's come up with the right solutions.' We're not trying to dictate a solution. We don't think we have all of the answers, but we think the American people should make sure that their candidates lead on this issue and come up with the right answers.

Yes, we accept as a given that we need better teachers. There are absolutely lots of teachers who are trying to come into the profession, but they are not attracted enough to say, 'I'm going to switch careers to do it,' or they are often not retained ... because the salaries and the compensation aren't there to make it happen.

What is your measure of success here of this initiative? Is it getting a discussion going, seeing issue-position statements from the candidates in education, or actually seeing changes in schools?

Well, ultimately down the road, we want to see changes in schools. I mean, that is what we are driving for. But we think this is the right time, that the next step to make changes in schools is to get this as part of the national discourse and make sure the presidential candidates are talking about it so that whoever is chosen really says education is my No. 1 domestic priority for the United States.

Correct, up to No. 1, domestically.

If you can get people to focus on the problems of our schools failing lots of our kids, then comes the question of solution. We have a very – a bill now, the No Child Left Behind Act, in which the public is greatly divided, and people in education are very much divided about it. Doesn't getting education higher up in the debate simply mean that there might be more talk about conflicting ideas about how to improve it?

But as a democracy, that is how we make change, right? We debate issues and then we move forward. And so it's an important debate and one that Congress certainly needs to happen.

I just want to ask you about a statement on the Bill and Melinda Gates Foundation's Web site that I read, which is that, "All students in the United States can and must graduate from high school, and they must leave with the skills necessary for college, work, and citizenship." I think everyone would agree that they better leave with the skills for citizenship because everyone can vote at age 18, and we urge them to. College. Can we reasonably expect 100 percent of high school students to become college students?

Yes, I think we can. And, in fact, I'm here today in the Chicago school district visiting with students – huge number of Latinos and African-American populations, and guess what? I'm in schools where 95 to 98 percent of these kids are going on to college, and it's because they started freshman year with teachers who believe in them and said, 'These kids can do it.' And maybe they are not coming in with the right reading or math skills, but we are going to bring them up, and we are going to have high expectations of them. And guess what? Those kids are succeeding, and those kids are getting into college.

That would be a dramatic increase of the share of high school students, if 100 percent went on to college. I mean, you would be effecting an enormous social change if you could reach –

Correct, and that is the idea.

I think it is going to take us quite a while. I think that this is a long-term effort and I think it's one that the foundation is going to be at for a very long time. But it ought to be our goal as a nation. We shouldn't let this number of students drop out. I think it's a moral crisis that we're failing students this way.