The second of a three-part series. 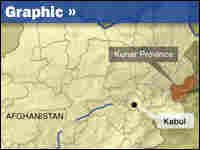 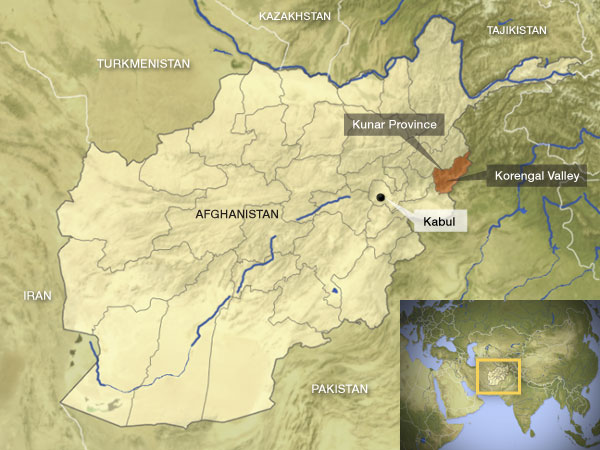 In Afghanistan, people say they are losing faith in their government amid growing insecurity and rampant corruption. But nowhere is people's mistrust of public institutions more pronounced than in the justice system.

On Reporting In Afghanistan

NPR's Soraya Sarhaddi Nelson writes about the challenges she faced trying to get an interview with a judge for this series.

There is little Afghans fear more than the Taliban.

The Islamist insurgents have killed and wounded thousands of innocent people across Afghanistan. Yet many Afghans, especially in rural areas, turn to Taliban judges to settle grievances.

They say the militants — unlike the country's official court system — get things done quickly and without asking for bribes.

One "judge," Mullah Nasrat Ramani, waits in an abandoned schoolhouse overlooking the Pech River in eastern Afghanistan. Ramani, 35, has a trim, black beard, a wool cap on his head, windbreaker over his tunic and baggy pants — and looks like most Pashtuns living in the area.

But the Taliban chant on his cell phone reveals Ramani's true identity — he belongs to the Salafi, a militant group in the Korengal Valley that is closely allied with the Taliban.

Ramani says he's an Islamic law graduate from Kabul University, and for the past three years or so, he's served as a Taliban judge in the area. He says he frequently goes to Korengal residents' homes to hold court sessions — that is, when he's not fighting American soldiers.

"We are mobile judges," Ramani says. "Sometimes we go to the people, and sometimes they come to us. We don't have a courtroom, and we're not official. But we are sanctioned by the Taliban leadership to carry out justice using Islamic law."

Ramani says most of his recent cases were civil disputes. He heard one murder case a couple months back that ended in acquittal.

A half-hour's drive away in the city of Asadabad, taxi driver Habib Noor says he is grateful for judges like Ramani. He says many people in Kunar province go to the militants to get their grievances heard, even in dangerous areas like the Korengal, where U.S. forces clash with militants almost daily.

Noor says the problem with government courts is that they are too slow and corrupt. Whoever pays the biggest bribe wins the case, he says.

Such attitudes about the Afghan justice system are common. Experts say that in the seven years since the West has tried to rebuild the court system, it has developed into a complicated maze fraught with corruption.

Western and Afghan officials say that's partly because there's been too little time to build enough courthouses and create a new pool of legal professionals. Decades of war basically destroyed the judicial infrastructure in Afghanistan, and killed or drove out most of the country's legal minds.

But critics of the system, like lawmaker Daud Sultanzai, say such excuses are wearing thin with the Afghan people.

Providing What The Government Doesn't

Sultanzai represents a volatile province south of Kabul. He says the justice system's weaknesses have played right into the hands of the Taliban. He explains that the militants quickly learned that the best way to gain popular support is to provide what the government can't.

So the Taliban assigned its own "governors" and "judges" to bring rule of law to people living in provinces where it has a strong presence, mostly in the south, east and west.

"Not that they are just, but what they do is they use this as a tool," Sultanzai says. "They are very smart in choosing what tools they should use that society is looking for."

Reached by cell phone, Taliban spokesman Zabiullah Mujahid says it was at the people's request that the courts were created. He says the main goal was to solve land disputes created by long periods of war and foreign occupation.

Mujahid says the judges render verdicts based solely on Islamic law. He says all are religious madrassa or university graduates. Neither he, nor other Taliban officials interviewed, knows how many militant courts there are in Afghanistan. But they say that in provinces where the Taliban is active, every district has one.

A Darker Side Of Taliban Justice

Afghan TV reporter Nawab Momand says there's a darker side to the emerging Taliban justice system that the group's leadership doesn't talk about.

Momand, who specializes in coverage of the Taliban, says the trials people don't hear about are the ones for Afghans whom militants kidnap and usually kill. There's a standing order from the top Taliban leadership to nab anyone they suspect of working with U.S. or NATO forces, the Afghan government or foreign contractors.

Once captured, the prisoners are taken before a Taliban court for a quick trial. There are only two outcomes, Momand says — acquittal or death. He says the judges are often told what verdict to issue beforehand.

"I can't say their rulings are fair," Momand says. "There isn't much of a legal procedure — just a quick conference between the judges over the testimony."

Momand knows, because he experienced it. He and three friends were kidnapped in late September.

He says gunmen ambushed his car in Logar province, about an hour's drive south of Kabul. They blindfolded and bound the occupants, then threw them back into the car. They accused Momand of working for an Indian construction company.

The gunmen drove the prisoners to a demolished house somewhere in the desert. Inside the ruins, they faced a Taliban court. Momand says the judges wore prayer caps and carried guns. He says they asked many questions.

But the judges didn't appear to have the authority to decide the captives' fate. The kidnappers packed the prisoners back into the car and drove them to a neighboring province. There, the prisoners were taken before another panel of Taliban judges sitting in a garden.

Momand says he and the chief judge recognized each other — the judge worked for the government when the Taliban ruled here. Momand and his friends were quickly released with an admonition that he provide more favorable coverage.

Reached by cell phone, the Taliban judge who freed Momand says his seizure was an honest mistake based on faulty information, and "we let him go, unharmed," the judge points out.

But Momand is not as forgiving. He believes nobody really chooses to go to a Taliban judge. He says people are just too scared to do otherwise.