Accessibility links
Minn. Recount: Franken, Coleman Vs. 'Lizard People' A Minnesota panel meets to review thousands of challenged ballots that may help decide the outcome of Democrat Al Franken's bid to unseat Republican Sen. Norm Coleman. Many of the ballots have unusual markings — and some were cast for "Lizard People." 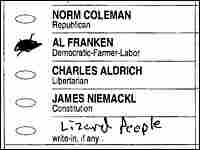 A voter seemed to cast a ballot for Al Franken, but also put "Lizard People" as a write-in candidate for senator and for other offices. The county auditor/treasurer threw out the ballot, terming it a case of overvoting. Representatives for Franken challenged that decision. Tom Robertson/MPR hide caption 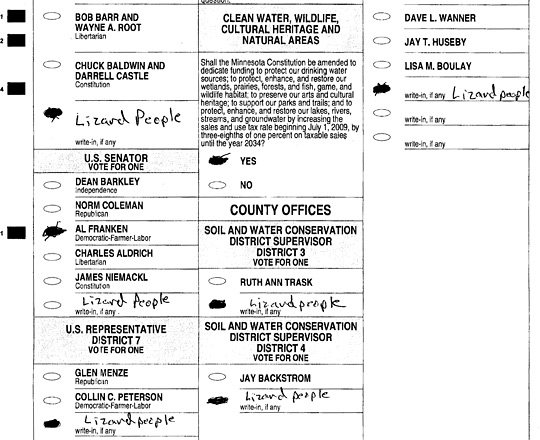 A voter seemed to cast a ballot for Al Franken, but also put "Lizard People" as a write-in candidate for senator and for other offices. The county auditor/treasurer threw out the ballot, terming it a case of overvoting. Representatives for Franken challenged that decision.

You Be The Judge

Our colleagues at Minnesota Public Radio have constructed an interactive quiz based on actual 2008 ballots. The quiz is a chance to see contested ballots -- and to see what other visitors to the site think of them.

Round One
Round Two
Round Three
Round Four
Minn. Statute On Eligible Votes 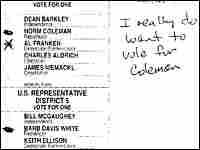 One voter hoped to make his or her intentions clear by writing a note — but may have invalidated the ballot by initialling it. Minn. Secretary of State's Office, via MPR hide caption 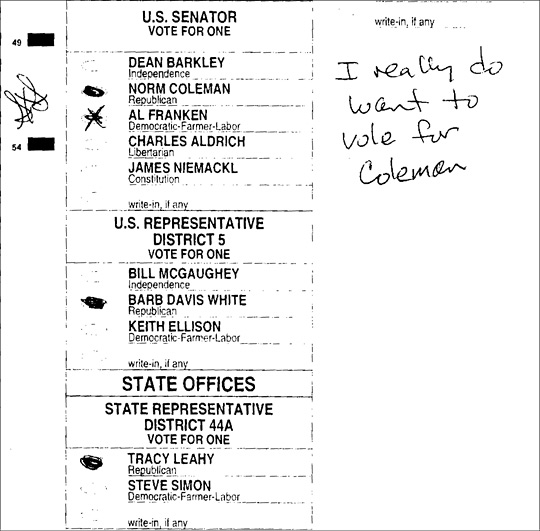 One voter hoped to make his or her intentions clear by writing a note — but may have invalidated the ballot by initialling it.

"The campaign has continued, even though the election was over" six weeks ago, Jay Weiner, who writes for MinnPost.com, told NPR's Renee Montagne.

The five-member bipartisan Minnesota Canvassing Board will review questionable or vague ballots that were challenged by both sides during the recount. To speed up the process — and ward off criticism — each campaign is eliminating challenges.

"It feels a lot like more of a fourth-grade softball game, where somebody's trying to take their ball and go home," says Weiner. And he says the campaigns have raised the level of trash-talking to a degree more often seen in professional sports than in political arenas.

And the public has grown less interested in the outcome as the recount has dragged on. "I think the mood is, 'When is it going to be over? Let's get somebody in there,' and maybe, 'Will it ever end?' " Weiner says

Both Coleman and Franken got 42 percent of the vote in a contest that Weiner calls the most expensive Senate race in the country this year — about $30 million.

"Neither one of these guys really won. I mean, both got 42 percent of the vote," he said. "It was a 'none of the above' kind of vote here."

Sixteen percent went for Dean Barkley, whom Weiner calls an "anti-government" candidate. Barkley served briefly in the Senate in 2002 after Sen. Paul Wellstone died in office.

Each campaign has raised money to help get their view of the election out, even as they recruit volunteers to monitor the recount.

"To use the sports metaphor, they're working the refs," Weiner says. In this case, the "refs" are the Canvassing Board, made up of 4 judges and the secretary of state. The board will rule on challenged ballots.

At one point, there were more than 6,000 ballot challenges. That number has dropped by half, and the campaigns have pledged to continue to throw out their own challenges. By Tuesday, there may be only about 1,500 challenges for the board to review.

The ballots are problematic and contested for a range of reasons — on some ballots, for example, voters scribbled in names such as "Lizard People," or circled a name rather than shading in the appropriate circle, or made bizarre markings. "Some people do strange things," Weiner says.

The review process could take an entire week, but the race won't end there. Last week, the Canvassing Board agreed that as many as 1,500 incorrectly rejected absentee ballots — which were never counted on election night — could be included in the recount total.

Minnesota's 87 counties reportedly will review which of those rejected ballots might be included in the overall recount.

New senators need to be sworn in to Congress by Jan. 6, but even that seemingly firm deadline isn't guaranteed to end the election — particularly if the recount margin is fewer than 100 votes. Noting that both sides have shown a determination to "keep on keeping on," Weiner says that if the recount doesn't resolve the issue to everyone's satisfaction, the U.S. Senate could choose which candidate should take the seat.

"It could come to that," Weiner says, although he doubts it will.

"I just don't think Minnesotans want to see the senatorial race decided by 99 other rich guys."

Weiner On The Recount