Accessibility links
Q&A: Madoff Case Puts Spotlight On SEC As the Securities and Exchange Commission endeavors to make its case against Wall Street money manager Bernard Madoff for allegedly defrauding investors of up to $50 billion, critics are questioning why the regulator ignored early warning signals. 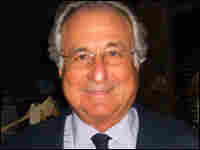 Wall Street veteran Bernard Madoff was arrested on Dec. 11 by the FBI and along with his investment firm charged with securities fraud. madoff.com hide caption

What may be the largest investment fraud in Wall Street history also may turn into a scandal for one of Wall Street's most important federal regulators.

As the SEC endeavors to make its case against Madoff for allegedly defrauding investors out of up to $50 billion, critics are questioning how the regulator could let this happen and why it ignored early warning signals.

Here, a look at how the SEC is handling the case and how one man and his investment firm could cause so much financial chaos.

What happened with the SEC's oversight of this case?

SEC Chairman Christopher Cox said in a statement Tuesday that the SEC's initial findings are "deeply troubling" because they reveal that the agency failed to take action.

"The commission has learned that credible and specific allegations regarding Mr. Madoff's financial wrongdoing, going back to at least 1999, were repeatedly brought to the attention of SEC staff, but were never recommended to the commission for action," he said.

Cox said there were "multiple failures over at least a decade to thoroughly investigate these allegations or at any point to seek formal authority to pursue them." The decision to not initiate a formal investigation also meant the agency didn't use its subpoena power to collect information about Madoff. Instead, Cox said, SEC staff "relied upon information voluntarily produced by Mr. Madoff and his firm."

Arthur Levitt, who was SEC chairman in the 1990s, told NPR that Madoff's name was mostly known because of the trading firm that bore his name.

"He was a broker-dealer. That's all I knew about him," Levitt said. "He wasn't managing anybody's money as far as I knew, so nobody spoke about Madoff making money for them. He was making money for himself by trading."

Cox said the SEC's inspector general would investigate past allegations regarding Madoff and his firm and why they were not pursued at the agency. He also said he has ordered mandatory recusal from the ongoing investigation for any SEC staff that had more than "insubstantial personal contact" with Madoff or his family.

How could the SEC let this happen?

The SEC has a broad oversight mission that includes watching over securities exchanges, brokers and dealers, investment advisers and mutual funds. So with all this regulation, how could Madoff's alleged Ponzi scheme happen?

Critics say the agency fell down on the job.

"It's a huge failure," says Stephen Davis, a senior fellow at the Millstein Center for Corporate Governance at the Yale University School of Management. "Here you have an agency that is relied on as the investor's advocate. They let this one go. It's just so big that it dwarfs the size of many of the funds the SEC is supposed to regulate, and yet they seem to have missed the boat."

Davis says it's not just a case of hindsight. He says some of the warning signs the SEC should have seen include the firm's caginess about what it disclosed and that it was using a small, unknown auditor to handle such a large fund.

Will investors who profited from Madoff's fund have to return their proceeds?

The answer may differ for individual and institutional investors. Questions are already being raised about whether big banks and financial institutions will be held responsible.

One of the reasons large firms may be held accountable is that they are paid to manage and safeguard money. "The institutions are sophisticated, theoretically, and they earn fees based on how they do precisely this kind of screening to make sure the money they invest is safe," Davis adds.

Who is Bernard Madoff?

Madoff was a respected figure on Wall Street. He founded his firm in 1960 and was known for delivering double-digit returns for individual and institutional investors even during tumultuous times in the market. He was an expert networker with a talent for attracting investors.

Madoff also served as the non-executive chairman of the Nasdaq stock market in 1990, 1991 and 1993. At that time, the Nasdaq board was an independent committee under the supervision of the National Association of Securities Dealers.

Who has been hurt?

There's a growing list of institutional investors, including some of the world's largest banks as well as foundations, pension funds and individual investors, who may have been taken in by the alleged $50 billion Ponzi scheme.

Charities that have been hit hard include dozens of Jewish philanthropic organizations that invested directly with Madoff or indirectly through other money managers. According to The Wall Street Journal, Madoff both contributed to and helped to run investment portfolios for a number of these foundations.

The Jewish Federation of Greater Los Angeles says it lost $6.4 million, or more than 10 percent of its endowment. Madoff also made inroads with some investors through his membership at the Palm Beach Country Club.

One investor, the Fairfield Greenwich Group, which manages its own hedge funds and markets them to foreign clientele including private banks and institutional investors, said it was trying to determine "the extent of potential losses."

Jeffrey Tucker, founding partner, said Fairfield Greenwich had worked with Madoff for almost two decades. The firm is facing a potential loss of $7.5 billion — more than half of its $14.1 billion in assets under management — because its funds were connected to Madoff's firm.

What is a Ponzi scheme?

A Ponzi scheme is an illegal type of pyramid scheme in which money from new investors is used to pay "returns" to previous investors. It creates the illusion that the investment is actually paying off for investors. The Securities and Exchange Commission says these types of schemes are based on a "rob Peter to pay Paul" model that continues until the promoter can't raise enough money from new investors to pay the earlier investors. Then the whole scheme collapses.

It is named for Charles Ponzi, who defrauded thousands of New England investors in the 1920s with a postage stamp scheme.

How did Madoff's scheme work?

All the details aren't yet available. The SEC said in a press release that just prior to his arrest, Madoff told two senior employees that his investment advisory business was "all just one big lie," adding that it was "basically, a giant Ponzi scheme."

The SEC said that its investigation is continuing. The agency said Madoff knew for years that his investment firm was insolvent. They added that they are moving "quickly and decisively to stop the fraud and protect remaining assets for investors."

How do I avoid falling prey to one of these schemes?

It's not an easy task, especially if someone has an illustrious list of clients that he can use as references. But if a fund promises returns that are so out of whack with what well-managed and respected funds are able to deliver in the same market conditions, then that could be a warning sign.

In addition to relying on common sense, investors also need to do some of their own homework to gauge whether a fund and its investment manager are trustworthy. If it sounds too good to be true, then it probably is. And that may be reason enough to walk away.

It's also important to read your financial statements. You should be able to tell if your money is invested in stocks, bonds, commodities, real estate or money markets. If you have no idea what kind of assets the fund or management company is investing in or if you can't tell from your statement, that's not a good sign. And if the statement just contains the "opening" and "closing" balance, then that's not adequate disclosure.

It's also not a good idea for investors to have all of their assets tied up in one fund or with one investment adviser. If the fund or adviser doesn't have a long track record and an established reputation like Vanguard, Fidelity Investments or Charles Schwab, then do your research before investing. Is it registered with the SEC? Find out if there's any track record of complaints, lawsuits, fines or violations.

The SEC has a broad oversight mission that includes watching over securities exchanges, brokers and dealers, investment advisers and mutual funds. So with all this regulation, how could Madoff's alleged Ponzi scheme happen?

This incident may hasten changes to the financial landscape. It's likely to become one of many issues that will go under the microscope in 2009 when consumer advocates, federal regulators and Congress weigh in on financial regulatory reform.

With additional reporting by NPR's Jim Zarroli and The Associated Press