Accessibility links
Inauguration: Expect Nonstop Drink, Crowds The D.C. City Council has passed emergency legislation that would allow bars and restaurants to serve alcohol around the clock until 4 a.m. in the days leading up to the inauguration. The city's mayor says he'll sign the bill. 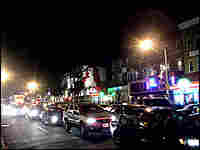 Adams Morgan, a popular Washington, D.C., neighborhood, may reap the benefits of a City Council measure that permits bars and restaurants to serve alcohol until 4 a.m. in the days leading up to the presidential inauguration. Daquella Manera/via Flickr hide caption 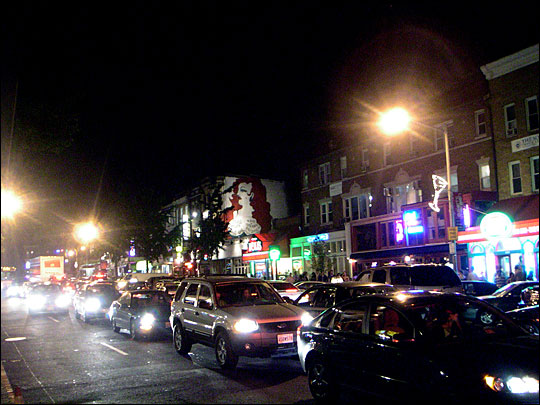 Adams Morgan, a popular Washington, D.C., neighborhood, may reap the benefits of a City Council measure that permits bars and restaurants to serve alcohol until 4 a.m. in the days leading up to the presidential inauguration.

As many as 4 million people are expected to invade Washington, D.C., for the inauguration of Barack Obama as the 44th president of the United States.

And the D.C. Council recently created a flurry of controversy by passing emergency legislation that would allow bars and restaurants to stay open around the clock and serve alcohol until 5 a.m. from Jan. 17 through Jan. 21. Some community leaders and two U.S. Senators objected — citing safety concerns.

On Tuesday night, the D.C. Council voted to modify the legislation. The establishments will still be allowed to serve food around the clock, but they must stop serving alcohol at 4 a.m. Bars also must pay a registration fee for every evening they intend to stay open past the normal hours. Bars and restaurants will have to pay $100 per night, and nightclubs must pay $250 per night.

Mayor Adrian Fenty has said he will sign the legislation.

Last Saturday night along 18th Street in Washington's trendy Adams Morgan neighborhood, the streets were just beginning to fill up around 10 p.m. This neighborhood is a place where bars sprout like trees in a forest. So the reaction among customers to plans to extend drinking hours was: "Woo-hoo!"

"You could vote Cheney in, and I'd still want the bars open," says Brian Branwit, from suburban Virginia. Bars there shut down even earlier than in the District of Columbia, where last call is typically 3 a.m. on weekends and 2 a.m. on weeknights. But patrons seem excited by the prospect of a few extra hours of imbibing.

John Jordan of Philadelphia also thinks it's "a wonderful thing."

"We're gonna be here that week, and we need the bars open," he says.

Jordan and his wife, Theda, came to town this past weekend to audition restaurants and bars and to ensure that they will be hanging at the coolest places with 20 of their friends.

At Madam's Organ, a busy spot on this popular strip, owner Bill Duggan said the extra hours seem like a no-brainer.

Nancy Shia is a member of Adams Morgan's advisory neighborhood commission. She's out most weekends along 18th Street taking pictures of police and the public alike to monitor their conduct. She says that even on regular nights in this area, it's a challenge when the bars shut down.

Darrah Feldman, standing along 18th Street smoking, thinks revelers ought to remember who the celebration is for.

"If you keep the bars open, they continue to drink. The more intoxicated they get, the lower their intelligence goes, and the higher the violence and crime and all that," Feldman said. "And I know our new president-elect is so not about that."