Accessibility links
FHA Loans May Hold Key For Would-Be Homeowners A program created in the 1930s to help pull the country out of the Great Depression has come back in fashion. The Federal Housing Administration is now insuring nearly a third of the nation's home loans. But some people are calling FHA loans the "new subprime." 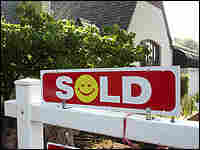 One mortgage expert says that last year, FHA-backed loans represented only 3 percent of the mortgage market. Now, he estimates, they're up to 30 percent. iStockphoto.com hide caption

A program created in the 1930s to help pull the country out of the Great Depression has come back in fashion. The Federal Housing Administration is now insuring nearly a third of the nation's home loans. FHA loans haven't had that kind of market share in a generation — and it's a sign of just how dramatically the mortgage market has changed.

In 2005 and 2006, just about anybody could get a loan. There also were a lot of mortgage options: subprime loans for people with low credit scores; stated-income loans; and piggyback mortgages that essentially meant buyers didn't have to make a down payment.

"The piggybacks are long gone," Steve Hops, senior vice president of production at Guild Mortgage in San Diego, says with a hearty laugh.

These days, there are two types of loans left. There are plain old vanilla loans that Fannie Mae and Freddie Mac will buy, which are for people with excellent credit scores and who can afford at least 10 percent for a down payment. Then there are loans backed by the Federal Housing Administration. FHA loans were totally unpopular during the boom years, but now Hops says they dominate his business.

"Our company is roughly 60 percent FHA, and there's some branches that we have that are as much as 80 percent FHA," Hops says.

These loans originate with mortgage banks such as Guild or Wells Fargo or Bank of America, and then the FHA insures them. There's a fee upfront, and buyers also have to pay a monthly premium. But borrowers don't have to have a good credit score and they can put down as little as 3 percent.

"The teachers and the policemen and the firemen all have good solid jobs, and we're doing loans for them," says Hops. "As a matter of fact, our company is enjoying some of the best production we've had in many years."

For Howard Johnson of Washington, D.C., the appeal of an FHA loan lay in the low down payment. He's about to close on a one-bedroom condo and says it would have been too much of a stretch to pull together enough money for the kind of down payment required for a conventional mortgage.

"I really do appreciate FHA because ... I really wouldn't have been able to afford to buy a home without it," he says.

"FHA loan is an option that every loan officer ... needs to have at their disposal," says Strent, vice president of Apex Home Loans in Bethesda, Md. "I mean, the reason we went out and got licensed was because we saw that the liquidity in the other stuff was going away and that FHA was going to be one of the only games left in town."

This is why FHA-backed loans have seen a big rise in market share. Guy Cecala, publisher of Inside Mortgage Finance, says that last year, FHA-backed loans represented only 3 percent of the mortgage market. Now, he estimates, they're up to 30 percent.

While the FHA loan program is helping to prop up the U.S. housing market, Cecala notes that there are risks. If the recession drags on, the housing market fails to recover and job losses mount, he says taxpayers could be on the hook for billions of dollars in losses.

"It's hard to think, though, that an FHA program which is experiencing such huge growth and is picking up the slack from a decimated subprime market is not going to see increased losses down the road," says Cecala. "We just don't know what the price tag is going to be."

Some people are even calling FHA loans the "new subprime" because they have the most lax lending guidelines currently available.

"It's terrible — I don't know why people would say that. It's so untrue," insists Meg Burns, director of single-family program development with FHA.

"We validate that they have the employment. We require that the income be sufficient to cover the cost of the mortgage," says Burns. "These are two key features that were missing in the subprime market. So we are certainly nowhere close to what was happening in subprime."

Still, the FHA anticipates more of the loans it insures will fall into foreclosure in the coming months. That's why it's shifting $12 billion into a loss reserve fund.