Accessibility links
Time Capsule Brings Headlines From 1896 In 1896, a small copper box filled with items of the day was placed in the foundation of a church in Novato, Calif. The box was opened Monday. Its damp contents included newspapers and a Bible. 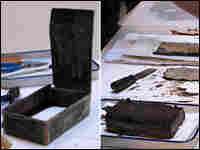 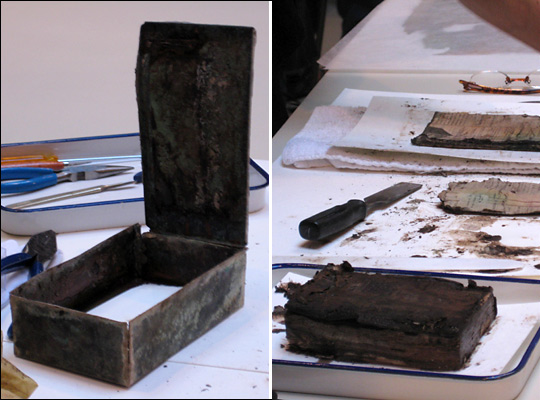 The copper box was found beneath a historic Presbyterian Church.

In 1896, a small copper box filled with items of the day was placed in the foundation of a church in Novato, Calif. The box was opened Monday. Its damp contents included newspapers and a Bible.

The time capsule was opened under controlled conditions by a conservator in Oakland, Calif.

The conservator, Karen Zukor, specializes in repairing art and paper artifacts. But Monday, she stood over a different kind of project. Surrounded by chisels, spatulas, and hammers, Zukor was preparing to open a small cigar-shaped copper box of artifacts from 112 years ago

"My biggest concern is that the box has been subject to moisture and the contents will be moldy, Zukor said.

Looking on was Kent Webber, pastor of the Presbyterian Church in Novato, just outside San Francisco. The original church is now part of Novato City Hall. Webber says that recent renovations gave the church and the city a chance to recover the box.

"It came to the mind of some church members that now would be the time to look for this time capsule that had been placed underneath the cornerstone of the building in March of 1896," Webber said.

That was when the charter members of Novato's Presbyterian Church laid the small copper box in one of the cornerstones of their church. According to church records, it contains a Bible, newspapers of the day, and a list of the congregants.

"Okay, we've already got one answer right there. It's got water in it," she says.

It's a bad sign that deflates expectations. Zukor patiently pries open the old copper box. Inside there's a soggy cloth-bound Bible and a folded newspaper. Its pages are soaked but the print, mostly advertisements, is still legible.

Zukor says she thinks she might salvage the newspaper, but has some doubts about the Bible.

"There is a chance that if the cover can be separated from the text, then the text can slowly dry out by itself. But right now, it's like a big dense brownie, she says.

You might be surprised to know that there's actually an International Time Capsule Society. It's based in Atlanta. Paul Hudson, its founder, says that the situation in Novato is pretty common.

"There's so much moisture underground that more often than not, the few time capsules that have been opened just turn out to be a soggy mess," Hudson said.

Hudson says the box from Novato isn't technically a time capsule. It's a cornerstone box, meant to be found or opened only when a building is torn down or moved.

Time capsules, he says, are buried or sealed away to be opened at a specific date. The term "time capsule" was coined by the Westinghouse Company for the 1939 World's Fair.

"Its a uniquely American idea, sort of instant archaeology, to preserve artifacts for posterity and then somehow associate it with a retrieval date as if some one will know to open it," Webber said.

Whatever you want to call the box from Novato, there's still a sense of wonder and awe as on-lookers view the soggy Bible and newspaper. Novato's mayor pro tem, Jeanne Macleamy, says there's a good lesson here.

"Now what we can learn from this," she said, "is, when we put our own time capsule or cornerstone together — it needs to be water tight."

Sounds Of 1967 In Rare Time Capsule

A fourth-grader reads his speech about 1967, and a wish for the future: "no more wars."

Science teacher Mr. Rodger places items into a time capsule, from a report card to "a rock-and-roll magazine."

PTA President Rosalie Nussbaum speaks to "the mothers and fathers of the year 2000."

A sampling of ideas about the world in 2000, from moving sidewalks to cars without wheels. 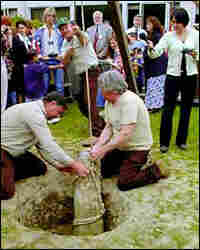 There may be close to 15,000 time capsules resting somewhere around the world, either buried in the ground or encased above it. But only 1 in 1,000 will ever be opened, according to the Atlanta-based International Time Capsule Society. Most often, they are forgotten or lost. And even if they are recovered, the contents may have turned to mush.

This was not the case with a capsule buried in 1967 and opened in 2000 by alumni of Meadow Elementary School in Baldwin, N.Y. Among the contents was something the society says is rare: an intact reel-to-reel audio tape.

The tape is a 45-minute recording of the school assembly before the capsule was buried in the school's front lawn. There are speeches from students reading award-winning essays about the year 1967 and giving their predictions for the year 2000 — a time when many of the children would be in their far-off 40s.

The capsule was made of PVC piping, encased in cement and then lowered into the ground while more than a thousand students looked on.

But 33 years later, school officials were unaware of the capsule's existence — until former students started calling, wondering when the ceremony to unearth the capsule was scheduled. Unfortunately, no one at the school knew where it was buried. It took a former student to help find it.

Warned that the contents may have disintegrated due to the elements, school officials pulled the capsule out of the ground weeks before the event for a sneak peak. It was perfectly preserved, so they closed the lid and returned it to the earth.

Unfortunately, the broken seal allowed water to seep into the capsule in the weeks before the ceremony. Many of the papers were soggy and illegible, but the other items — such as a flashlight, a TV Guide, a bobby pin, a rubber band and a pencil sharpener — were mostly intact.