Accessibility links
Occidental Brothers: African Highlife In Chicago When KEXP broadcast from Chicago this past summer, the station was turned on to a local gem. The Occidental Brothers Dance Band International brings rock- and jazz-trained American musicians together with Ghanian musicians in a cross-cultural throwdown. Hear the session. 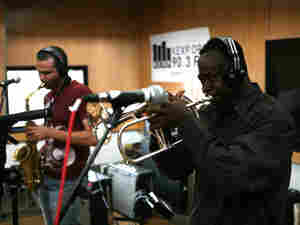 In July, our Seattle-based KEXP broadcast live from Chicago for our third consecutive year. In addition to enlisting touring bands to perform live on the air during our visit, we always make a point to showcase the rich and vibrant local music scene in Chicago. Much to my delight this year, through the recommendations of KEXP's listeners and members in Chicago, I discovered the local gem Occidental Brothers Dance Band International. This multiracial and bi-continental Afropop ensemble brings jazz-trained and rock-schooled American musicians together with Ghanaian performers in a spot-on cross-cultural throwdown. Its blend of Central and West African styles is guaranteed to get listeners dancing.

The talented musicians in the Occidental Brothers Dance Band International have a varied background in traditional African, jazz, Latin and rock styles, giving the band a richness and depth that's intoxicating. Bandleader Nathaniel Braddock's guitar rhythms had me dancing in my chair from the first note. Braddock is a veteran of the Chicago rock and jazz scenes, and he currently teaches African guitar at Chicago's Old Town School of Folk Music.

I was transfixed by singer Kofi Cromwell as he sang and played a wicked trumpet, as well as a variety of traditional African percussion instruments, throughout the performance. Hailing from Western Ghana, Cromwell was a member of the celebrated Ghanian highlife band Western Diamonds. He sings in a haunting mixture of English and his mother tongue, Twi. Greg Ward sizzles on alto saxophone, giving the songs a jazzy flair, while standup-bass player Joshua Ramos brings his Latin influence to the mix. The talented Marcus Evans sat in for the band's usual drummer, Asamoah Rambo, who is also from West Africa and played in the Western Diamonds with Cromwell. Evans, though, is an accomplished drummer in his own right, and you'd never know that he plays with the others only occasionally.

In the early days, the band mostly played African tunes from the '60s, covering artists such as Congolese greats Mwenda Jean Bosco, Franco and Bantous de Capitale. More recently, with the addition of several new members, the group plays mostly original tunes in the West African highlife style, as well as music representative of East Africa. The band plays constantly, but until recently had not played much outside of the Chicago area. It's great to see that it'll soon share its music beyond its hometown: The Occidental Brothers Dance Band International is scheduled to play a series of East Coast shows, including a stop at New York City's Webster Hall in January 2009.