Accessibility links
TV-Turnoff Week: Helping Parents Pull the Plug Across the country, families are participating in TV-Turnoff Week — a campaign encouraging Americans to experience life without television, one week at a time. How are kids and their parents holding up? 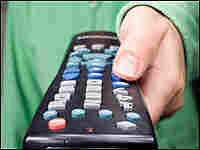 Ten-year-old Julia Gorman is a fifth-grader at Cranbury Elementary School in Norwalk, Conn. A typical weeknight for her includes a little play time, some reading time, and watching her favorite TV shows, American Idol and Dancing with the Stars.

But Sunday night, Julia's family turned off the TV, and it has stayed off all week. Her family is participating in TV-Turnoff Week, a nationwide campaign that encourages families to experience life without television — one week at a time.

"The point of turning things off for a week is to give people the opportunity to realize just how attached to these devices they are," Kesten says.

Kesten got involved several years ago, after his neighborhood school encouraged families to try a weeklong media blackout. Kesten says he never realized how different his house would feel.

"The first thing you notice is that you have time," Kesten says. "And the second thing is that things really slow down a great deal."

With the TV and electronic gadgets off, Kesten says, his kids rediscovered all sorts of ways to play together.

Eventually, the novelty wore off. Kesten says that at the end of the week his kids definitely wanted to go back to watching TV. The family compromise has been to spend much less time in front of the screen.

"Television is like dessert," says Shari Barkin, a pediatrician at Vanderbilt Children's Hospital, in Nashville, Tenn. "Children want more of it."

Barkin says there is plenty of research to suggest that too much TV is harmful. It is linked to aggressive behavior, weight gain and attention problems.

Barkin has some advice for parents who are trying to participate in this week's TV-Turnoff. She encourages parents to carefully observe their children's behavior.

That may mean less prompting to get homework started or to come to dinner.

Barkin says that when children are exposed to fewer stimuli — eliminating the noise and distraction that comes with TV — the easier it is to stay focused on the task at hand.

Not every child will respond this way, and there are plenty of children don't watch enough television to be negatively influenced by it.

As for 10-year-old Julia, she says turning off television and cutting down on computer time this week has helped her remember how much fun it is to play with her siblings.

"Yesterday afternoon, when I finished my homework, instead of going to watch the show, me and my sister read in bed and I played outside more. ... I still like the shows, but it's also fun to play outside — so they're kind of like equal."

Playing outside and TV equal? Many parents might consider that a breakthrough.