Accessibility links
Single-Payer Health Care: If Not Now, When? With a Democratic president about to take office and strong majorities in the House and Senate, backers of single-payer national health insurance are saying now is their moment. But passage of a government-funded national health plan isn't much more likely in the next four years than it was the last time Democrats controlled Washington.

Listen
Single-Payer Health Care: If Not Now, When? 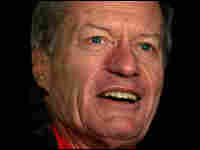 For supporters of a national health insurance plan funded solely by the government, you would think things are looking up.

There's a new Democratic president about to take office, with substantial Democratic majorities in the U.S. House and Senate. So, many people think a "single-payer" health care bill could be on the verge of passage.

"The country needs it and the American people support it, so that makes the prospects pretty good," says David Himmelstein, an associate professor at the Harvard Medical School and co-founder of Physicians for a National Health Program, which has been advocating for a single-payer health plan since the late 1980s.

President-elect Barack Obama said at a town-hall meeting in August that he would "probably go ahead with a single-payer system" if he were designing a system from scratch.

But that's not anywhere close to what he's been advocating.

Instead, the new administration's plan is focused on building onto the existing system, in which most people get insurance through their job.

And on Capitol Hill, the lawmakers who will be charged with overseeing health care overhaul legislation are singing a similar song.

"I don't think a single-payer system makes sense in this country," said Senate Finance Committee Chairman Max Baucus (D-MT). "We are America. We will come up with a uniquely American solution, which will be a combination of public and private coverage."

Even House Ways and Means Health Subcommittee Chairman Pete Stark (D-CA), who has in previous sessions of Congress introduced his own single-payer proposal, says the public is not ready for the huge change that eliminating the health insurance industry would mean.

"I don't think with something as personal and important as medical care, people are ready to give up what they have," Stark said.

That frustrates people like Himmelstein, who says he's seen poll after poll that shows significant public support for a single-payer system. "A majority of American people say they favor a plan like Medicare paid for out of taxes covering all Americans," he says. Medicare is one type of single-payer system.

Robert Blendon, who studies public opinion and health care at the Harvard School of Public Health, says it's true that single-payer enjoys significant public support. But most of the time, the support is highest when it's compared to the status quo.

For example, backers of a single-payer plan frequently cite a December 2007 poll by the Associated Press and Yahoo.

In that poll, 65 percent of respondents said the U.S. "should adopt a universal health insurance program in which everyone is covered under a program like Medicare that is run by the government and financed by taxpayers."

But their only other choice in that poll, chosen by 34 percent, was to "continue the current health insurance system in which most people get their health insurance from private employers, but some people have no insurance."

When given more options about ways to expand coverage, single-payer "is the least popular," Blendon says.

Of those, the most popular was offering incentives to employers to provide coverage to their workers, supported by 79 percent.

The only option that failed to garner a majority was providing universal coverage through a single-payer — 44 percent.

On the other hand, when those same respondents were asked to choose their top most preferred option, single-payer tied for first, demonstrating the depth of feeling of its supporters.

But Blendon says opponents of a government-sponsored health system are equally vehement, which is another reason why no president since Harry Truman has put such a policy on the table.

"It shows the sense of controversy they felt they would face if they did that," Blendon says.

Even Obama demurred when he was asked point-blank about single-payer back in August.

What he left unsaid was that that's a fight too big even for him to win.