Accessibility links
Wine Blogger Makes Choosing a Bottle Palatable At a bland building in suburban New Jersey, Gary Vaynerchuk is demystifying the wine world. Through Wine Library TV — an almost daily Web broadcast of wine tastings from his store — Vaynerchuk hopes to put people at ease when they choose a bottle of vino. 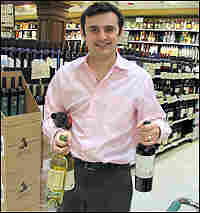 Gary Vaynerchuk assembled a case of wine for Weekend Edition. Here's what he chose, starting with six whites, followed by six reds:

He wants to demystify it.

When going out to dinner, he says, people avoid the wine list.

"Everybody's passing it off because they're afraid to make the right choice. I've never seen anybody do that with a menu," he says. "You're not concerned what kind of cheeseburger you order. If you say extra pickles, nobody's critiquing what you did."

So Vaynerchuk, 31, has taken over the liquor store his father started and built a 40,000-square-foot store in Springfield, N.J., devoted mostly to wine. He also started Wine Library TV, an almost-daily video blog featuring his wine tastings that he posts on his Web site.

A good way to learn about wine, he says, is to have a knowledgeable salesman at your local wine store select a moderately priced mixed case of wines – six whites and six reds.

Vaynerchuk recommends that customers open them one at a time with dinner over a couple of weeks, learning the different flavors, learning what they like and dislike, and using their own words to describe what they've tasted.

"People have told me, 'Gary, I was at a wine tasting and I said, "This wine tasted like chicken soup."" And everybody looked at me and I wasn't scared, because I knew you would say the same thing, and I felt comfortable in saying it."

Don't expect to like everything in your starter case, Vaynerchuk warns.

"When I give somebody a perfect case of wine, when they first want to learn about wine, I expect them to come back with four wines they hated, because I want to give them 12 different distinct ranges of flavors to figure out what they like."

Vaynerchuk assembled a case for NPR's Scott Simon, who paid him a visit and got a lesson in wine tasting and the wine business.