Accessibility links
Connecticut Puts The Squeeze On Olive Oil Fraud Good olive oil is expensive to produce, so it's no surprise that some people are trying to pass off a low grade product. Now, they'll face the wrath of the state of Connecticut — the first state in the country to set standards for the purity of olive oil. 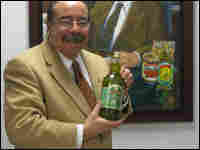 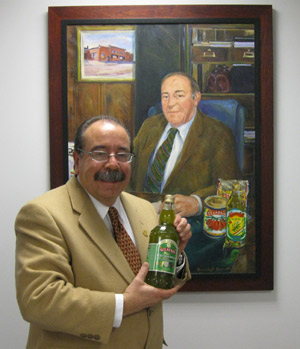 Food importer Luciano Sclafani stands in front of a painting of his father, who started the family business. When Sclafani saw a competitor's products selling for a cheap price, he became suspicious. 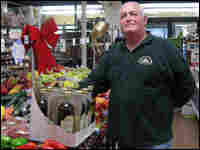 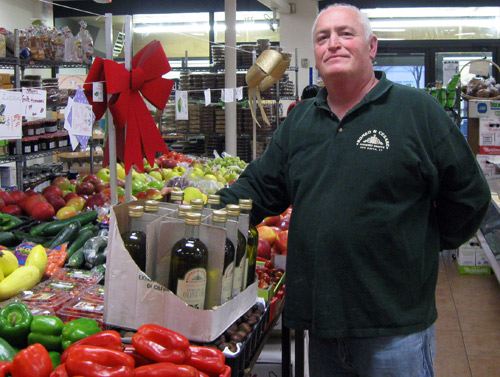 Just as wine lovers expect complexity in an outstanding vintage, lovers of olive oil want purity in their favorite extra virgin. High-end olive oil is very expensive to produce — and fraud is a growing problem. When Connecticut officials discovered olive oil that was labeled extra virgin but was really a cheap knockoff, they took action.

In most New England supermarkets, you can't walk down the Italian food aisle without seeing products imported by Luciano Sclafani. His company, which bears his name, sells such foods as canned peeled tomatoes, San Marzano tomatoes, regular tomatoes and pasta products.

But Sclafani says the item that's closest to his heart is the Sclafani olive oil. Olive oil, he says, is "one of mankind's purest foods."

"In fact, we have one product called the Frantoio Unfiltered from Sicily, and this I actually take a half a shot glass every morning to ingest," Sclafani says. "It keeps my hair. Being a young man of 62, it's not white like my compatriots."

A one-liter bottle of Frantoio Extra Virgin sells for $25. So when Sclafani saw a competitor's three-liter tin selling for $9.99, he sensed trouble and went straight to the authorities.

"We came across cans of olive oil that were for sale in Connecticut that had, after testing, these other oils in there — peanut oil, soy oil, hazelnut oil," Farrell says.

In April 2007, FDA investigators and U.S. Marshals seized more than 10,000 cases of olive oil from storage facilities in New York and New Jersey. It turned out that tins labeled as extra virgin contained mostly soybean oil mixed with low grade olive-pomace oil. The seized products had an estimated retail value of more than $700,000. Amusing as it may sound, Farrell says there's a serious side to the story.

"We saw it as not only that the consumer was being cheated, but their health was being put at risk by these oils being in there and it not being disclosed in any way," he says.

For many people with serious food allergies, nut oils can be fatal. So Connecticut became the first state in the nation to enact standards to protect the purity of olive oil.

They mirror regulations set by the International Olive Council in Spain, and create legal definitions for "virgin," "extra virgin" and "olive-pomace" oil. And the state has the authority to fine wholesalers who sell diluted olive oil without proper labeling.

"It's very good because the people, they no gotta be influenced for the price, and they no give the quality," he says.

New York, New Jersey and Rhode Island say they're interested in setting state standards, but California is next in line. It begins regulating the slippery olive oil industry in January.