Accessibility links
Mates Of State On Mountain Stage Jason Hammel and Kori Gardner-Hammel perform as the duo Mates of State. The pair's latest album, Re-Arrange Us, is beginning to show up on year-end "best of" lists across the country. In this performance on Mountain Stage, the couple showcases songs from that album, as well as 2006's Bring It Back.

Recently profiled by ABC News as working parents in the rock 'n' roll profession, Jason Hammel and Kori Gardner-Hammel comprise the indie-pop duo Mates of State. The married couple is known to travel with their two young daughters in tow, making music and raising their family in as normal a manner as possible. 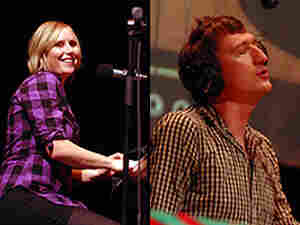 This year saw the release of Mates of State's highly praised album Re-Arrange Us, a CD that's already showing up on year-end "best of" lists across the country. They spent part of 2008 as the sole musical group in the touring troupe of Chicago Public Radio's This American Life.

Mates of State performs here as it often does, with Kori on keyboards and piano and Jason on drums. (They both sing and write the songs together.) They open with two tracks from Re-Arrange Us before covering Jackson Browne's "These Days." "Like U Crazy" and "So Many Ways" appear on their 2006 record, Bring It Back.