Accessibility links
Trio Mediaeval's Norwegian Christmas The Oslo-based trio of vocalists introduces a Norwegian Christmas tune, as well as a few traditions from their homeland, in NPR's Studio 4A. The group's latest recording has just been nominated for a Grammy Award.

My Heart is Ever Present

Trio Mediaeval's performance in Studio 4A is part of NPR's Christmas music special Choirs and Carols. Hear the full program: 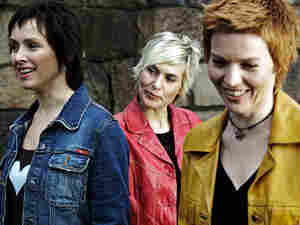 A Christmas present came a little early for the three members of the vocal group Trio Mediaeval. Their recording, called Folk Songs, was just nominated for a Grammy Award.

The folk music closest to Trio Mediaeval's heart is from the group's native Norway. When it visited NPR's studio, it brought along Christmas music from home. Christmas in Norway isn't like Christmas here: The music is different, says Torunn Ostrem Ossum, and so are some of the basic Christmas traditions.

There's no Santa Claus in Norway. Instead, Ossum says, they have several kinds of nisse — Christmas gnomes, you might say — including the Barn-nisse, who comes on Christmas Eve to eat porridge.

And if you don't leave the porridge, Ossum explains, this little gnome might get angry. Then there's the Julenisse: "He comes on Christmas Eve with the presents," Ossum says.

Trio Mediaeval sings Christmas songs old and new. Sometimes, they're both at once — music that's ancient and traditional, but wrapped in modern arrangements, like "Song of Mary," arranged for the group by one of its friends, the Norwegian folk singer Tone Krohn.

Although the name says "mediaeval," ancient music isn't the only kind of music the trio sings. It performs new compositions and new arrangements, written especially for its crystalline harmonies and ethereal sound.