Accessibility links
Farm Groups Praise Choice Of Centrist Vilsack President-elect Barack Obama's nominee to lead the Agriculture Department is yet another former political rival. Former Democratic Gov. Tom Vilsack of Iowa has received praise from a wide variety of farm groups for his experience in governance and skill in balancing competing interests. 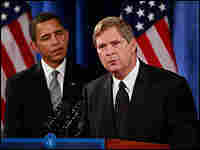 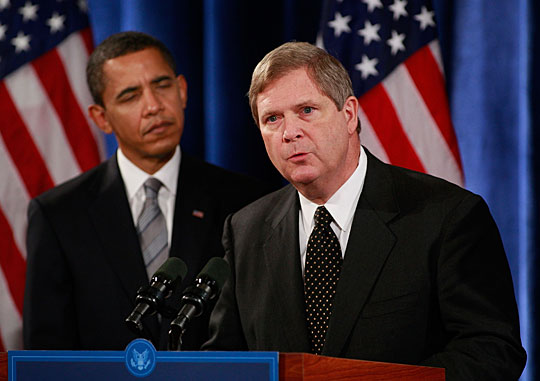 Former Iowa Gov. Tom Vilsack was praised as a leader who has experience in governance and balancing competing interests.

Former Iowa Gov. Tom Vilsack, who President-elect Barack Obama has tapped to lead the Agriculture Department, is the latest former rival to be nominated to Obama's Cabinet.

Vilsack, 58, once sought the presidency himself and then supported Hillary Clinton in the Democratic primaries.

Obama announced his selection of Vilsack on Wednesday, along with his choice for interior secretary, Colorado Sen. Ken Salazar. Both are considered moderate Democrats.

Some activists have sought to change USDA's focus, from mass production of chemically-produced and subsidized food to local markets and farmers producing organic and so-called "healthy" food. Others say the emphasis on agriculture defies the economic reality of rural America, where very few jobs and little family income are dependent on farms and ranches.

"In fact, some of the people on the left out here feel that Tom Vilsack has been too close to production agriculture," Yepsen says. "So, this is not a choice that is going to try to radicalize the Department of Agriculture. It's very much a centrist approach."

Yepsen cites Vilsack's support for construction of large hog farms when he was in the state Senate in Iowa. As a candidate for governor, Yepsen says, Vilsack was endorsed by the American Farm Bureau, a group that represents agribusiness interests.

That seems to contrast with the tone of the news conference Wednesday in which Vilsack was introduced as the agriculture nominee and Salazar was named to head the Interior Department.

President-elect Obama said both appointments mean "... ensuring that the policies being shaped at the departments of Agriculture and Interior are designed to serve not big agribusiness or Washington influence peddlers, but family farmers and the American people."

Vilsack himself spoke in populist tones.

"I know these people," Vilsack said. "America's farmers and ranchers deserve a secretary of agriculture that respects them for the contribution they make to all of us every day. I hope to be that secretary."

In fact, Vilsack gets high marks from some groups focused on small and family farms.

"This is a choice that represents change," says Chuck Hassebrook, director of the Center for Rural Affairs, a Nebraska-based advocacy group for small and family farmers and the rural communities they inhabit. "When Tom Vilsack was governor of Iowa, he was consistently making statements that supported ... federal policy changes to do less to subsidize big farms and do more to support conservation. And ... he invested in rural development."

"We view it as a real positive," says Bob Stallman, president of the American Farm Bureau. "One of our criteria (for this post) was that the individual have experience in governance and balancing competing interests, and Gov. Vilsack has obviously had both."

Stallman also feels comfortable with Vilsack because he comes from Iowa, "a state that is so heavily involved in agriculture."

In Iowa, Vilsack championed subsidies for the production of ethanol, a corn-based fuel. He's encouraged development of other biofuels, including cellulosic ethanol, which is derived from wood, cultivated grasses and inedible portions of plants. Vilsack even worked at an Iowa State University institute focused on genetically modified plants and animals.

The focus on biofuels and biotechnology generated opposition to Vilsack's appointment when his name was first mentioned in November.

Vilsack's selection "is not change we can believe in," says Ronnie Cummins, of the Organic Consumers Association. His petition drive collected more than 20,000 signatures opposing Vilsack's nomination.

"Obama's choice for secretary of agriculture points to the continuation of agribusiness as usual, (and) the failed policies of chemical and energy-intensive, genetically engineered industrial agriculture," Cummins adds.

Reward For An Iowa Victory

Politically, Vilsack was belatedly aligned with Obama. The former governor staged his own brief campaign for president, dropping out long before the Iowa caucuses. He then turned his vigorous support to New York Sen. Hillary Clinton. His selection now brings yet another former rival into the president-elect's top tier.

"Barack Obama got a big break in the Iowa caucuses even though Tom Vilsack was working for Hillary Clinton," notes Yepsen of the Des Moines Register. "Barack Obama owes a lot to Iowa because of that caucus victory. And I think that some of this appointment is simply a plum, a reward to Iowa for that important victory."

Yepsen also suggests some simpatico between Obama and Vilsack. Both had troubled childhoods.

"Tom Vilsack was an orphan and was an adopted child," Yepsen recalls. "He did not have a particularly easy childhood. His mother suffered from alcoholism. And I really think that shaped his life."

Tragedy also pushed Vilsack into politics. He was a small-town Iowa lawyer 20 years ago when an angry and armed man disrupted a city council meeting and shot and killed the mayor. Vilsack was the mayor's appointed replacement. His entry into state politics came as an Iowa volunteer for a presidential candidate named Joseph Biden. Then came the state Senate and two terms as Iowa governor.

Yepsen adds that Vilsack's nomination as agriculture secretary could yield political benefits for the president-elect if Obama runs for re-election in four years.

"It will help Barack Obama build a firewall for the 2012 campaign against any other Democratic challenger coming at him from the left," Yepsen says. "The left is already unhappy. Putting Tom Vilsack in that position really gives Barack Obama a bit of a firewall here in an important caucus state."

President-elect Barack Obama has selected former Iowa Gov. Tom Vilsack to head the Department of Agriculture and Colorado Sen. Ken Salazar to serve as secretary of the Interior Department in his administration.

Obama made the announcements Wednesday at a Chicago news conference, his third in as many days to present new Cabinet appointments.

"It is time for a new kind of leadership in Washington that's committed to using our lands in a responsible way to benefit all of our families," Obama said.

Vilsack, 58, was among the field of Democrats who faced off against Obama in the 2008 primary. After dropping out of the race early on, he threw his support behind Hillary Clinton. Vilsack is the fourth rival of Obama's from the Democratic primary campaign to join his administration.

Vilsack was first elected Iowa governor in 1998 and served two terms. He has a reputation as a centrist who balanced Iowa's budget and resisted tax increases. He has pushed alternative energy sources as a way to revive the nation's struggling rural areas.

"I look forward to working with congressional leaders who share the president-elect's vision of bringing hope to rural America, of being good stewards of our natural resources, of providing American leadership on climate change, and making America a nation truly dedicated to health and nutrition," Vilsack said.

As agriculture secretary, Vilsack — who led the largest corn-producing state — will play a key role in shaping the nation's ethanol policy.

At the Interior Department, Salazar, 53, will be charged with overseeing controversial oil and gas drilling on public lands and managing the nation's parks and wildlife refuges. He is expected to implement a difficult balance outlined by Obama during the election campaign — to protect natural resources while tapping the nation's energy potential.

"I will do all I can to help reduce America's dependence on foreign oil," Salazar said. "As we take the moon shot on energy independence, the energy imperative will create jobs here in America, protect our national security, and confront the dangers of global warming."

In Congress, Salazar co-sponsored a bill to create a new land conservation system to permanently protect 26 million acres of national monuments and wilderness areas. The legislation died during the lame-duck session of Congress after the November election.

Salazar, who was elected to the Senate in 2004, has opposed drilling in Alaska's Arctic National Wildlife Refuge and objected to the Bush administration's efforts to lease Western lands for oil shale development. However, Obama's pick has angered some environmentalists, who dislike his ties to ranching and were hoping instead for a loyal ally of the movement such as Rep. Raul Grijalva (D-AZ).

Salazar will also be responsible for relations between the U.S. government and American Indians.

"Ken and I will work together to make sure that tribal nations have a voice in this administration," Obama said.

Answering a question about charges that Illinois Gov. Rod Blagojevich tried to sell Obama's vacant Senate seat, the president-elect said his team is "abiding by the request of the U.S. attorney" not to release until next week the results of their internal investigation as to whether any of the Obama transition staff had improper dealings with Blagojevich. Neither Obama nor anyone on his team has been accused of any wrongdoing in the probe.