Accessibility links
Louisville Art Hotel Offers Rooms With A View When you go to an art museum, you don't expect to be able to take a shower or sleep there. But in Louisville, Ky., there's a place where you can do both. It's called 21c, and it feels a lot more like a contemporary art gallery than a hotel — but in fact, it's a little of both. 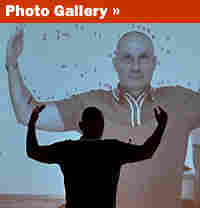 What Is An Art Hotel?
Kenneth Hayden 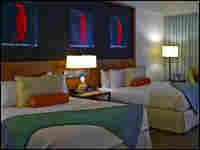 At 21c, artwork is integrated into bedrooms (above) and bathrooms. Kenneth Hayden hide caption 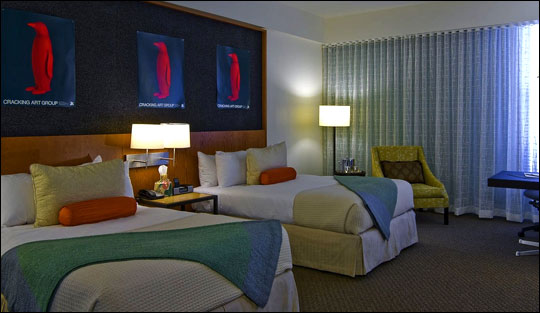 At 21c, artwork is integrated into bedrooms (above) and bathrooms. 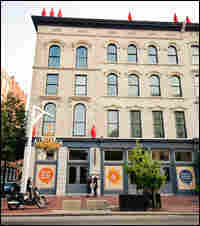 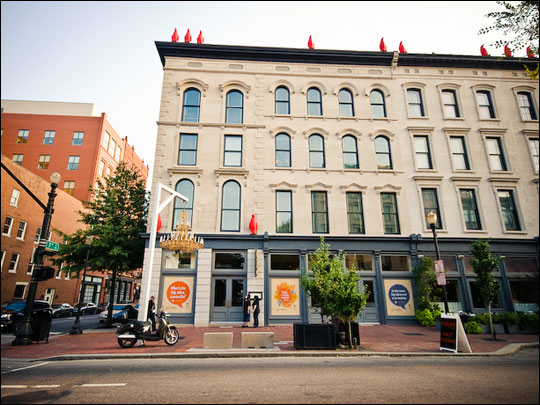 21c is part of a larger effort to revitalize downtown Louisville.

When you go to an art museum, you don't expect to be able to take a shower or sleep there. But in Louisville, Ky., there's a place where you can do both. It's called 21c, and it feels a lot more like a contemporary art gallery than a hotel.

Walking in, one of the first pieces guests notice is on the floor: It's a film of a couple in bed, sleeping under the covers. Steve Wilson, who owns the hotel with his wife, Laura Lee Brown, likes to joke that guests can book the couple's room — for "only a slightly larger fee."

Wilson and Brown have been buying contemporary art from around the world for a long time. About three years ago, they opened 21c as a place to show their collection. Now, anyone can view the art, no matter the time of day, even if they're not staying here. Sculptures, paintings, interactive video installations are everywhere — even in the bathrooms.

"I love doing this because it's so unlike a traditional museum," says Wilson. "It's so accessible, and that's what to me contemporary art should be all about."

21c has a permanent collection, rotating exhibitions and even a full-time museum director. William Morrow, the director, manages a portfolio of about 2,500 works, some by established artists like Andres Serrano and Judy Fox, and others by lesser-known artists.

Morrow says Wilson and Brown's taste is unpredictable. "In some respects, they shoot from the hip because they know what they like. There's a certain whimsy to it," he says.

Charles Venable, the director of the Speed Art Museum, Kentucky's largest and oldest art museum, thinks 21c is a good model for how his more traditional museum could evolve in the future.

"I think what they're doing down there is very relevant to a lot of people," says Venable. "Because it is commercial, they combine a restaurant, a bar, a place where you can stay — and they have great art there as well. It's the combination of different parts of culture that make it so special, whereas older-style museums tend to parse that out in ways that don't make it as meaningful for a lot of people."

Venable says he's even a little jealous. After all, visitors to the Speed can't sip a latte while looking at art.

But despite the casual atmosphere, some of the art at 21c is quite challenging. A show currently on display, called All's Fair In Art and War, includes a small replica of a mosque made out of bullets and shotgun shells, a large American flag made out of 18,000 tiny toy soldiers, and a mesmerizing video of a soldier who has lost his forearms.

Wilson acknowledges that this might not be the kind of thing people want to see first thing in the morning when in their hotel lobby.

"Some travelers want to stay at the Marriot every time because they have their points, and they're comfortable there," says Wilson. "[But] there are some travelers who travel so much, they really want a different experience."

Wilson and Brown have invested about $30 million in the museum, not including the value of the art. (Brown is a member of the family that co-founded Brown-Forman, one of the largest liquor and wine companies in the world.) For the couple, this isn't just a hobby — the goal is to make a profit, which, says Wilson, they are.

"There was nothing that said this will be successful, so it was a risky thing to do. But now we're going in our third year, and occupancy is out the ceiling," he says.

Like most hotels, rates at 21c vary depending on the season and the day of the week. Right now, rooms begin at $150 a night, but in the springtime, the rates bump up to over $200.

The couple are looking to expand in other cities, like Chicago and Cincinnati, and there's already a 21c being built in Austin, Texas.

As for their prospects, Jan Freitag, a vice president at the travel industry research firm STR Global, says that because the founders of 21c have private capital, they could do well.

"With every downturn, there's opportunity. If they're able to move in on new markets now and build now and be ready for the customer in 2010, then they'll be the first ones with the first new open properties as the economy recovers," Freitag says.

You don't have to rent a room to see one of the hotel's most popular exhibits — an interactive video by Camille Utterbach that is projected onto a huge wall by the elevators. The screen is a white background with different colored letters that look like they're raining down from the sky. But it's also a mirror, and if you stand there long enough, the letters eventually form a poem on your outstretched arm.

"As I'm talking to you, I raise my arm, and the letters are beginning to rest on my arm like snowflakes. So we have a number of people who just stand here and play with this," Wilson says.