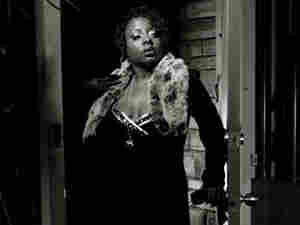 The Count Basie Orchestra, with Basie on piano, came roaring out of Kansas City during the Great Depression. It's tempting to say that they're back for the current one, but that ignores decades in which the Basie band has thrived on music both classic and current.

Historians divide Basie history into the Old Testament — pre-WWII riffing with high-profile soloists and the get-up-and-dance rhythm section — and the New Testament, with more sophisticated writing. Here, Grammy nominee Ledisi pours on her soulful vocals during a New Year's Eve 2007 celebration at Yoshi's in San Francisco.

The Basie Orchestra sounds great on charts such as "Fantail" by the late Neal Hefti (1922-2008). Hefti grew up near Omaha, where he learned the trumpet and saw Basie come through town. In the late '50s, Hefti's writing recharged the band, especially on Atomic Basie, the album with the infamous mushroom cloud on the cover.

Leading up to our New Year's Eve date, the Count Basie Orchestra had flown home from Japan and played a Christmas show in Los Angeles, and was doing sold-out business all week at Yoshi's, where they met Ledisi, who comes from across the Bay in Oakland. Unrehearsed and unplugged, Ledisi shines at first with the Basie rhythm section and later with the whole band.

Ledisi knows her strengths and is not intimidated. As a member of the Basie band put it, "The girl can sing." She's been Grammy-nominated for Best New Artist and introduced her voice to jazz listeners on a PBS special celebrating Ella Fitzgerald.