Former President Bill Clinton's foundation ended years of secrecy on Thursday by releasing the names of its more than 200,000 donors. The two top donors — both charities — gave more than $25 million each. The list could provide fodder for critics next month, when Sen. Hillary Clinton has her confirmation hearing to become secretary of state.

The sources of the Clinton Foundation money have been a mystery and an occasional controversy for 11 years, ever since the foundation began seeking contributions in the middle of Clinton's second term.

Since he left office, Clinton has used the money for seven initiatives, among them fighting HIV and AIDS and controlling greenhouse gases. The foundation built the Clinton Presidential Library and finances the high-profile Clinton Global Initiative.

The most recent data show that the foundation received at least $492 million in donations from its inception in 1997 through last year, according to The Associated Press.

The two top donors are the U.K.-based Children's Investment Fund Foundation and UNITAID, a multinational charity that promotes low-cost drugs for impoverished regions. Other donors include the governments of Saudi Arabia, Kuwait, Qatar and Oman.

In a different vein, the list also includes such prominent liberal moneymen as Peter Lewis and Steven Bing — not to mention George Soros. Some corporations are on the board, including All-Tel, Entergy and Duke Energy, as well as foundations from Citibank and Bank of America.

The Clinton Foundation said nearly 90 percent of the contributions were $250 or less. But there's enough big money and enough big names to catch the attention of conservatives, journalists and bloggers.

One of those bloggers is Steve Clemons of the New America Foundation. He publishes the Washington Note.

"Everyone is going to be measuring Hillary Clinton's behavior and decisions and where she speaks based upon a look back at a list of Bill Clinton's buddies," he said.

There's no law requiring a former president's nonprofit foundation to disclose its donors, and the Clintons had resisted any release of names.

The massive information dump came about because the Clintons and President-elect Obama's advisers all realized that without it, suspicions of conflicts of interest could sink Hillary Clinton's appointment.

So Clemons has some advice for the secretary-designate.

"The best thing I think Hillary Clinton should do with this donor list of her husband's is to know it, ignore it and even find a few people on the list to make sure she stiffs," he says.

Some possibilities for stiffing a donor might be found among Internet and media companies that made contributions, such as Google and the foundation of The News Corp., which is part of Rupert Murdoch's media empire.

Those corporations do business in China, where the government pressures them to censor news and dissenting voices.

Larry Cox, director of Amnesty International USA, says: "What we'll be looking at more than the list is, we'll be looking very carefully at what the new administration, including the new secretary of state, does on the Internet issues, which are very real and alive in China."

Thursday's disclosure won't get the Clinton Foundation many points for transparency.

The foundation presented the 205,000 names spread over 2,900 Web pages. It listed donors by category rather than by actual amount, and it gave no dates, so it's unclear whether someone gave 10 years ago or last month.

But those problems only slow down the exploration; they don't stop it. So for those who follow Clinton's diplomatic career, the list could end up as a standard reference. 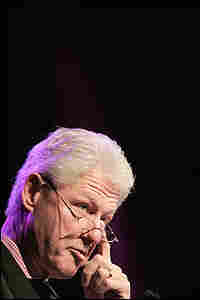 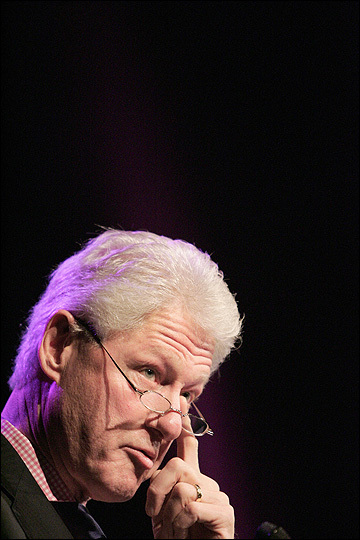 The former president answered media questions in November 2008 at a global forum on leadership held in Rotterdam, Netherlands.

Many foreign governments have contributed heavily to the William J. Clinton Foundation, including:

Kuwait, Qatar, Brunei and Oman ($1 million to $5 million each)

The William J. Clinton Foundation's donor list is heavy with overseas business interests. Among them:

Friends of Saudi Arabia; the Dubai Foundation; the Taiwan Economic and Cultural Office ($1 million to $5 million each)

Among the individuals listed as giving $1 million to $5 million:

Lakshmi Mittal, the chief executive of international steel company ArcelorMittal. Mittal is a member of the Foreign Investment Council in Kazakhstan, Goldman Sachs' board of directors and the World Economic Forum's International Business Council.

Harold Snyder, director of Teva Pharmaceutical Industries, the largest drug company in Israel. His son, Jay T. Snyder, serves on the U.S. Advisory Commission on Public Diplomacy, which oversees State Department activities, and served as a senior U.S. adviser to the United Nations, where he worked on international trade and poverty. Jay Snyder donated between $100,000 and $250,000 to the foundation.

Lukas Lundin, chairman of oil, gas and mining businesses including Tanganyika Oil Company Ltd., an international oil and gas exploration and production company with interests in Syria, and Vostok Nafta Investment Ltd., an investment company that focuses on Russia and other former Soviet republics

Victor Pinchuk, son-in-law of the former president of Ukraine. Clinton spoke in 2007 at an annual meeting of Yalta European Strategy, a group Pinchuk founded to promote Ukraine joining the European Union.

A wealth of contributions from foreign governments and overseas donors has helped fund the William J. Clinton Foundation since its inception in 1996, a donor list released Thursday shows.

The foundation has raised at least $46 million from Saudi Arabia and other foreign governments that the former president's wife, Hillary Rodham Clinton, may end up negotiating with if she becomes the next secretary of state. That $46 million estimate represents about 10 percent of total giving to the foundation.

The Kingdom of Saudi Arabia gave $10 million to $25 million to the foundation, a nonprofit created by the former president to finance his library in Little Rock, Ark., and charitable efforts to reduce poverty and treat AIDS. Other foreign government givers include Norway, Kuwait, Qatar, Brunei, Oman, Italy and Jamaica. The Dutch national lottery gave $5 million to $10 million.

The Blackwater Training Center donated $10,001 to $25,000. The State Department — to be led by Hillary Clinton if she is confirmed — will have to decide next year whether to renew Blackwater Worldwide's contract to protect U.S. diplomats in Iraq. Five Blackwater guards have been indicted by a U.S. grand jury on manslaughter and weapons charges stemming from a September 2007 firefight in Baghdad's Nisoor Square in which 17 Iraqis died.

The foundation disclosed the names of its 205,000 donors on a Web site Thursday, ending a decade of resistance to identifying the sources of its money. While the list is heavy with international business leaders and billionaires, some 12,000 donors gave $10 or less.

The biggest donations — more than $25 million each — came from two donors. They are:

Clinton agreed to release the information after concerns emerged that his extensive international fundraising and business deals could conflict with America's interests if his wife became President-elect Obama's top diplomat. The foundation has insisted for years that it was under no legal obligation to identify its contributors, contending that many expected confidentiality when they donated.

The list also underscores ties between the Clintons and India, a connection that could complicate diplomatic perceptions of whether Hillary Clinton can be a neutral broker between India and neighbor Pakistan in a region where Obama will face an early test of his foreign policy leadership.

The former president did not release specific totals for each donor, providing only ranges of giving. Nor did he identify individual contributors' occupations or countries of residence.

Nearly $500 Million In A Decade

Donors gave Bill Clinton's foundation at least $492 million from its inception in 1997 through last year, according to the most recent figures available.

Clinton thanked his donors in a statement for being "steadfast partners in our work to impact the lives of so many around the world in measurable and meaningful ways."

After negotiations with Obama's transition team, Clinton promised to reveal the contributors, submit future foundation activities and paid speeches to an ethics review, step away from the day-to-day operation of his annual charitable conference and inform the State Department about new sources of income and speeches.

According to the memorandum negotiated by the foundation and top Obama advisers, Bill Clinton agreed to publish the names of all past and future contributors to his foundation during Hillary Clinton's tenure as secretary of state.

The former president also agreed to step away from direct involvement in the Clinton Global Initiative, an annual charitable conference where businesses and many foreign governments pledge donations to help ameliorate AIDS, poverty and other social ills. He will continue serving as CGI's founding chairman but will not solicit money or sponsorships. The CGI will cease accepting foreign contributions and will not host events outside the United States.

Representatives of the foundation, including CEO Bruce Lindsey and attorney Cheryl Mills, and aides to Hillary Clinton met privately Wednesday with staff of incoming Foreign Relations Committee Chairman John Kerry of Massachusetts and ranking Republican Dick Lugar of Indiana to discuss the foundation's activities and review a memorandum of understanding drawn up by the Clinton and Obama teams.

The Foreign Relations Committee will hold hearings and vote on Hillary Clinton's nomination before sending it to the full Senate.

Shortly after Obama tapped Clinton, Lugar said he would support her, though he said there would still be "legitimate questions" raised about the former president's extensive international involvement.

"I don't know how, given all of our ethics standards now, anyone quite measures up to this — who has such cosmic ties," Lugar said.