Accessibility links
Obama Defends Choice Of Warren President-elect Barack Obama's choice of evangelical pastor Rick Warren to give the invocation at his inauguration ceremony has infuriated gay-rights activists. Few evangelicals voted for Obama and gays were some of his strongest supporters.

President-elect Barack Obama's choice of evangelical pastor Rick Warren to give the invocation at his inauguration ceremony has infuriated gay-rights activists. Few evangelicals voted for Obama and gays were some of his strongest supporters.

From NPR News, this is All Things Considered. I'm Robert Siegel.

And I'm Melissa Block. President-elect Barack Obama has asked Rick Warren, a conservative evangelical pastor, to deliver the opening prayer at the inauguration, and many gay activists are outraged. They say Warren is hostile to gay rights. NPR's Barbara Bradley Hagerty reports on why Mr. Obama would make this controversial choice.

BARBARA BRADLEY HAGERTY: Rick Warren is pastor of a megachurch called Saddleback and is famous for a blockbuster bestseller, "The Purpose-Driven Life." He's been called a new type of evangelical, more moderate with a broader agenda. But Mr. Obama's decision to give him such a prominent role at the inaugural is a bitter disappointment for some.

Mr. DAVID SMITH (Vice President, Human Rights Campaign): We are a constituency that worked very, very hard for his election, and we have been utterly and completely disrespected.

BRADLEY HAGERTY: David Smith is vice president of the Human Rights Campaign, a gay rights organization. He says Warren supported California's Proposition 8, which revoked the right to marry for gay couples. And, Smith says, Warren is on record saying that gay marriage is equivalent to marriage between siblings or polygamy. That, Smith says, shows that Warren's image as a moderate is a myth.

BRADLEY HAGERTY: Now, the president-elect is on the opposite side from Warren when it comes to abortion and gay rights, but he admires Warren's activism on poverty and AIDS in Africa. Two years ago, when Mr. Obama was a young senator from Illinois, Warren invited him to a conference on AIDS at his church in California.

President-elect BARACK OBAMA: I want to say, first of all, how blessed I am to be here today, and how grateful I am to Saddleback and to Pastor Rick.

BRADLEY HAGERTY: Warren was criticized by evangelicals for giving a stage to the liberal Democrat, a gesture that Mr. Obama noted in his news conference today.

President-elect OBAMA: Nevertheless, I had an opportunity to speak. And that dialogue, I think, is a part of what my campaign's been all about.

BRADLEY HAGERTY: The relationship between Mr. Obama and Pastor Warren began even earlier. David Domke, a professor at the University of Washington and author of "The God Strategy," says when Mr. Obama was writing his book "Audacity of Hope," he asked Warren to read his chapter on religion before it went to press.

Professor DAVID DOMKE (Communications, University of Washington; Author, "The God Strategy"): Warren responded and they had a good conversation, and that began a conversation about the fact that they disagreed on some things, but that they also had a lot of other things in common.

BRADLEY HAGERTY: He says the men have forged a friendship. And as Mr. Obama's presidential campaign gained momentum, Warren found himself at the center of politics. Warren invited Mr. Obama and his Republican rival, Senator John McCain, to talk about religion at his church in August. And it was under close questioning by Pastor Warren that the Democrat uttered one of his few gaffes, saying that deciding about when life begins was above his pay grade. As an evangelical, Warren represents a constituency that voted overwhelmingly against Mr. Obama. Steven Waldman, founder of Beliefnet, a religious Web site, says the president-elect is sending a message that he's not beholden to the left or the right.

Mr. STEVEN WALDMAN (Founder, Beliefnet): It's a statement that he's trying to having a kind of spiritual bipartisanship by having someone of tremendous stature like Rick Warren, but who clearly is politically different.

BRADLEY HAGERTY: Waldman says Warren has to step away from the culture wars if he wants to be the next Billy Graham. David Domke agrees, adding that both men have a lot to gain from their relationship.

Professor DOMKE: And I think they also believe that each of them provides a steppingstone to important constituencies, and they both have, you know, desires to talk to those people.

BRADLEY HAGERTY: No one believes the president-elect will withdraw the invitation. And so far, there's no controversy about the minister who is giving the benediction, civil rights leader Reverend Joseph Lowery. Barbara Bradley Hagerty, NPR News. 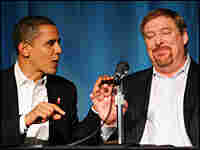 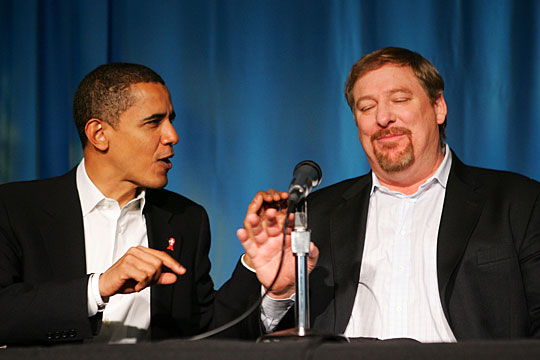 Barack Obama and Rick Warren speak before a press conference at the Global Summit on AIDS, Dec. 1, 2006.

What does it mean that Barack Obama chose Rick Warren, the multidimensional minister at Saddleback Church in Southern California and author of the mega-selling 2002 book The Purpose-Driven Life, to deliver the invocation at the inauguration on Jan. 20?

In some ways, President-elect Obama and Warren share a worldview. Both are pragmatists who preach a gospel of personal responsibility and community involvement. Obama speaks of a post-racial, post-partisan landscape. Warren is considered a post-denominational religious leader. And they both seem willing to take flak for a decision.

For example, Warren invited then-senator Obama to his church in 2006 for a Global Summit on AIDS — an issue the pastor is passionate about. The invitation was widely denounced by evangelicals because of Obama's support of abortion rights. Critics urged Warren to rescind the invitation, but Warren stuck by his guns.

At Thursday's news conference, Obama recalled that visit. "I was invited to Rick Warren's church to speak despite his awareness that I held views that are entirely contrary to his when it came to gay and lesbian rights and issues like abortion," Obama said. "Nevertheless, I had an opportunity to speak. And that dialogue, I think, is part of what my campaign is all about: that we're not going to agree on every single issue, but what we have to do is be able to create an atmosphere where we can disagree without being disagreeable and then focus on those things that we hold in common as Americans."

This time around, Obama is the one who is catching grief. Certain critics on the left do not think Warren is the right spiritual leader to set the tone for Obama's presidency. And to the gay and lesbian community, the choice of Warren is seen as a symbolic slap in the face.

In an open letter to Obama, Joe Solmonese, president of the Human Rights Campaign, wrote, "By inviting Rick Warren to your inauguration, you have tarnished the view that gay, lesbian, bisexual and transgender Americans have a place at your table."

Warren spoke out in favor of Proposition 8, a California constitutional amendment that bans same-sex marriage. "Rev. Warren is not a moderate pastor who is trying to bring all sides together," Solmonese said.

In a déjà vu moment, Solmonese urged Obama to reconsider his invitation.

To Randall Balmer, author of God in the White House: A History: How Faith Shaped the Presidency from John F. Kennedy to George W. Bush, Warren tries his best to steer clear of the culture wars.

The true significance of Obama's choice, says Balmer, is that it represents a break with the mainstream denominational past. The selection of Warren, he says, "signals a changing of the guard."

The exemplar of the old school White House counselor was Billy Graham, a Southern Baptist who provided spiritual guidance to most of the presidents between Dwight D. Eisenhower and George H.W. Bush. When Graham became too old to continue, his son, Franklin Graham, took up the mantel. Franklin Graham gave the invocation at the 2001 inauguration of George W. Bush.

Balmer, who is also a professor of American religious history at Barnard College, Columbia University, notes that Obama could also have chosen the younger Graham. Or, he jokes, the president-elect could have picked his former pastor, the Rev. Jeremiah Wright. "That would really have set off alarm bells."

Obama is saying so long "to the old guard of the religious right," Balmer says. And Warren's selection "is a nod toward the future."