Accessibility links
Pre-Inaugural Jitters At San Francisco Chorus Among the entertainment at Barack Obama's Jan. 20 swearing-in ceremony will be 86 young singers from San Francisco. The 43 singers from the San Francisco Boys Chorus and 43 from the Girls Chorus paired up, recorded one song and sent it off with their fingers crossed.

Among the entertainment at Barack Obama's Jan. 20 swearing-in ceremony will be 86 young singers from San Francisco. The 43 singers from the San Francisco Boys Chorus and 43 from the Girls Chorus paired up, recorded one song and sent it off with their fingers crossed. 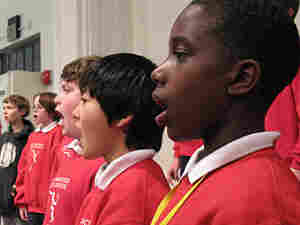 Well, now to another inauguration choice. We are not aware of any controversy in the chorus world around the decision to include, along with Aretha Franklin, Yo-Yo Ma, and the Navy and Marine Bands, 86 young singers from San Francisco. Nancy Mullane has that story.

NANCY MULLANE: To convince the Joint Congressional Committee on Inaugural Ceremonies to pick them, 43 choristers from the San Francisco Boys Chorus and 43 from the Girls Chorus paired up. Inside the girl's cavernous practice hall, they recorded just one song on a CD and sent it off, fingers crossed.

(Soundbite of song "America the Beautiful")

MULLANE: It was a hit. California Senator Dianne Feinstein chairs the committee. She says their sound was convincing.

Senator DIANNE FEINSTEIN (Democrat, California): This is the San Francisco Bay Area's best, and it was a little opportunity for me to put that best forward, so I took it.

MULLANE: If you are wondering whether any of the senator's grandchildren are in the choruses and getting preferential treatment, have no fear.

Senator FEINSTEIN: No, I'm afraid my family does not have good singing voices. So, that would not be the case.

MULLANE: But the kids in the two choruses absolutely do, and they have credentials. Both choruses have won Grammy awards and have toured worldwide.

MULLANE: Inside the rehearsal hall for one of their twice-a-week after school practices, the boys, all wearing red chorus sweatshirts, wait for direction, all eyes on their artistic director, Ian Robertson.

Mr. ROBERTSON: "Hosanna in the highest." I don't see it in your faces.

MULLANE: Robertson says these singers come from all over the Bay Area and from all different backgrounds. Only a third get financial assistance to be part of the choruses.

Mr. ROBERTSON: You know, we are just blown away by the whole thing that we are going to be there singing at the inauguration, at the actual swearing-in ceremony. It's huge in their lives. I think it means that for the rest of their lives, they'll never forget it.

MULLANE: One of the 43 pre-teen boys with pre-cracked voices in the Boys Chorus is 11-year-old Duane Smith, Jr. The competent, sparkly-eyed African-American boy with braces known as DJ says he was at his mom's work when she got the email.

Mr. DUANE SMITH, JR. (Member, San Francisco Boys Chorus): She was like, oh, oh, my gosh, DJ, you're going to the inauguration. And she was calling all my auntie, and my grandma, my uncle. My dad called my grandfather in Florida, called everybody. It was like, wow, I am really going. I can't believe this.

MULLANE: But the logistics of getting 86 singers, two directors, and about 14 non-parent chaperones to D.C. and back are anything but wrapped up. Flights are full and those available are running $2,000 a seat. Melanie Smith, the executive director of the San Francisco Girls Chorus is reaching out to supporters for help.

MULLANE: For the sake of kids like 17-year-old Sian Whitkey(ph).

Ms. SIAN WHITKEY (Member, San Francisco Girls Chorus): This inauguration for me is like the most important, like, historic event, like, that will probably ever happen in my life.

MULLANE: Whitkey is a soloist and has been a member of the chorus for seven years.

Ms. WHITKEY: Like, I was really into the election, like I have an Obama shirt and everything. And so when I heard about this, it's just like, wow, I'm going to see his face, like live, like right there. And we're right there, we're on the steps.

MULLANE: Break over, Whitkey steps back up on a riser to practice with the rest of the girls. Their big holiday program is less than a week away. From NPR News, I'm Nancy Mullane in San Francisco.

MULLANE: You're listening to All Things Considered from NPR News.