Accessibility links
40 Years Later, Apollo 8 Moon Mission Still Awes On Christmas Eve 1968, people around the globe watched a live broadcast from Apollo 8 of the first humans ever to orbit the moon. The mission altered the way earthlings saw themselves and their world. 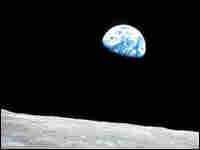 The Apollo 8 crew were the first humans to witness the Earth rising over the moon's horizon. NASA hide caption 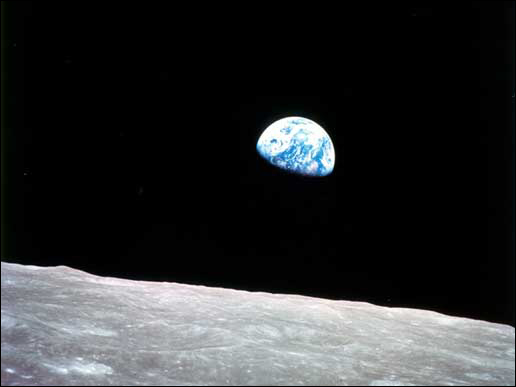 The Apollo 8 crew were the first humans to witness the Earth rising over the moon's horizon. 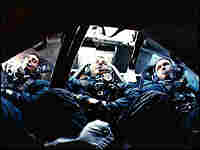 The first three humans ever to orbit the moon are shown returning safely to Earth. NASA hide caption

On Christmas Eve in 1968, Americans turned on their TV sets to watch something unprecedented: a live broadcast from outer space.

Three astronauts were orbiting the moon, sending back images of the gray craters and mountains that were passing by about 70 miles below their tiny spacecraft.

Never before had humans left Earth to circle another celestial body, one that was more than 200,000 miles away. The Apollo 8 mission changed the way that earthlings saw themselves and their world.

After describing the moon, the three astronauts read the first 10 verses of the King James Bible. That was a choice made by Commander Frank Borman, who had asked a friend for a suggestion. He knew the broadcast from lunar orbit would have the biggest audience in history.

"The only instructions that we got from NASA was to do something appropriate," Borman said recently. "That, to me, has always been the epitome of what this country's all about."

At the time, NASA was racing the Soviet Union to the moon. Borman says that "if my name would have been Leonov or Titov, I would have been extolling the virtues of Stalin or Lenin or somebody else."

A Bold Move To Beat The Soviets

Borman and his crewmates, James Lovell and William Anders, recently recalled their famous mission at the Smithsonian's National Air and Space Museum in Washington, D.C. They explained that NASA originally planned for them to stay low in Earth's orbit, like all the previous missions, to perform in-space tests of a lunar lander.

But development of that vehicle was delayed. And NASA suspected the Soviets might soon try to send a cosmonaut into lunar orbit. So in August 1968, the agency's top officials made a bold decision: Apollo 8 would try to get to the moon first.

On the morning of the Dec. 21 launch, Lovell said he was standing near the top of the Saturn V, a new rocket taller than a 36-story building and more powerful than any ever ridden before. The sun hadn't risen, and he recalled looking down and seeing the lights of the press corps far below: "And I looked at the press corps and I said, 'These people are really serious! We're going to go to the moon!' It suddenly dawned on me that this was not another Earth orbital flight."

Far Away And Tiny In The Darkness

The rocket blasted off with a huge spread of flame and hurled the men into space. They became the first earthlings to watch their home planet grow smaller and smaller and smaller, until it was floating far away and tiny in the darkness.

NASA flight controller Glynn Lunney watched the Christmas Eve broadcast at Houston's Mission Control. He says he was startled and deeply moved to hear the familiar words of Genesis beaming back from an alien world.

"It's almost like thinking about the human race growing up, coming out of the caves, growing up, making all the mistakes that we do, and then somehow having the intellectual ability to create something that goes to the moon," Lunney says. "It's sort of like ... it's our best."

It came at a time when Americans needed to be reminded that the best was still in them. "There was a lot of stuff that preceded Apollo 8 in the calendar year of 1968," Lunney says. "Almost all of it was bad."

A Happy Success In A Tough Year

The year started with the shock of the Tet offensive in Vietnam. Martin Luther King Jr. and then Robert Kennedy were shot dead. It was a year when, if you turned on your television, you might see people rioting in the streets.

Roger Launius, a space historian at the Smithsonian, says that because Apollo 8 came at the end of such a desperate time, "I would contend that it may have been even more of a striking success from a public perspective than the Apollo 11 landing was the next year."

He notes that the mission also is linked with the famous photo called "Earthrise" that shows a small, far-away Earth rising over the lunar horizon. The image of a beautiful, fragile Earth floating alone in a vast darkness helped jump-start the environmental movement, Launius says.

These days, the U.S. and Russia cooperate in space, with each other and with other nations. The partners have almost completed construction of a massive space station that is inhabited year-round. NASA's aging shuttles take different people back and forth a few times a year.

"I know people have gotten used to shuttle flights, and it's hard to distinguish one shuttle flight from another today," says Lunney of NASA. The agency wants return to the moon and someday go on to Mars. Even so, it's not clear if anything could recapture the transformative power of missions such as Apollo 8.

"Hopefully, we will have more Apollo 8 moments in the future," Lunney says, "but I would grant you that it seems on the surface that opportunities for that are relatively a handful in number."