Accessibility links
John Rutter: The Art Of The Christmas Carol With so many classic Christmas carols to choose from, creating brand new ones can be daunting, but English conductor-composer John Rutter has been at it for nearly 50 years. He shares his tips on what makes a good carol.

Listen
John Rutter: The Art Of The Christmas Carol

Hear John Rutter's early carol "Shepherd's Pipe" along with two carols from his new CD, performed with the Cambridge Singers.

Rejoice and Be Merry, for chorus & orchestra 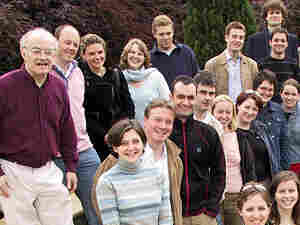 New holiday music gets written on a fairly regular basis, but rarely any new Christmas carols. John Rutter is one of the few who actually dares to write new ones.

It's been nearly 50 years since the successful English choral conductor and composer wrote his very first carols — "The Nativity Carol" and the "Shepherd's Pipe Carol." They've since been translated into many languages, even Tibetan.

Rutter joined Andrea Seabrook to talk about the history of Christmas carols and how to write one. (Hear the complete interview by clicking the listen link above.)

Rutter fell in love with Christmas carols when he was a chorister in grade school, but he gradually became more ambitious.

"It was really a short step from singing and enjoying carols, to saying 'Why don't I write some of my own?'" Rutter explains. "Every now and again I write a new carol and it's like a thread that runs through my musical life. It always brings me back to those happy days as a little boy soprano, getting so excited about Christmas."

On his new recording, A Christmas Festival, Rutter and his longtime choir, the Cambridge Singers, mix carols from Wales, Spain and even the Caribbean with five recent carols of Rutter's own, including a new version of "Ave Maria."

"It's often sung to the words 'Good Christian Men Rejoice,' and it's a carol dating right back to the 15th century. The legend goes it was sung by the angels on Christmas Eve and written down by a monk. If ever there was a carol that might have been sung by the angels, that would be it."

As for the future of his own carols, Rutter isn't sentimental.

"What I would like to think is that there is a new John Rutter out there writing lots of lovely new carols, and that mine will have served their day and their time, and they'll quietly be there in the Library of Congress maybe, if you search. But I won't mind a bit if they are forgotten."

The truth is, Rutter loves almost every Christmas carol — whether it's his own or one of the classics — because they all have an extraordinary ability to awaken happy memories.

"For me it just never seems to grow stale. I look forward to Christmas, hand on heart, every year."