Accessibility links
Two Sides Take Up Murder Case Online Eric Volz, a 27-year-old American, is serving a 30-year sentence for the murder of his Nicaraguan ex-girlfriend. Volz insists he is innocent, and now his family is publicizing his case on the Web to get him freed. 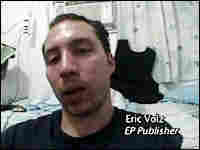 Volz appears in a screenshot from an online video defending his innocence. hide caption

'An American Wrongfully Imprisoned in Nicaragua'
'The Evidence Against Eric Volz'

Eric Volz is one of many Americans drawn to the beauty of Nicaragua.

Two decades after the end of a civil war between leftist Sandinistas and U.S.-backed Contra rebels, the country has become a magnet for retirees, surfers, and ecotourism.

After going there to surf, Volz ended up staying in Nicaragua, selling beachfront real estate and launching a magazine about local culture.

Life was pretty good — until last November. His 25-year-old Nicaraguan ex-girlfriend, Doris Jimenez, was murdered. Of the four suspects, Volz was the only non-Nicaraguan. He became the prime suspect.

The one witness placing Volz at the scene of the crime was himself a suspect — a petty thief with an established criminal history. Charges against him were dropped when he agreed to testify against Volz.

Evidence for Volz's defense, including phone and Internet records, and testimony from 10 witnesses who claimed to have seen Volz in another city at the time of the crime, were denied by the small-town court.

"After the hearing, Eric was chased by a mob chanting, 'Let the gringo out so we can kill him,'" says Anthony. "We believe that was a direct result of the frenzy that happened because of the press."

Anthony says they turned to close family friend Richard McKinney for help. McKinney had some experience with technology and media. At first, they thought it best to avoid more press attention.

"Our lawyers said the best course of action is to let the evidence speak for itself and not make the situation worse by introducing the media," says McKinney.

If that spun out of control, they reasoned, the story could turn into a Nicaragua-vs.-America firestorm. But when the court returned a guilty verdict, McKinney turned to his 24-year-old daughter Nicole, who works in an ad agency and knew a thing or two about creating "viral media" campaigns with YouTube, MySpace, and blogs.

"When I called her, I said, 'Darlin', we need to light a fire on the Internet,' and she said, 'Let me work on it,'" McKinney recalls.

Soon, blogs picked up the story, and big media like CNN and NBC followed. Around the same time, congressmen and State Department officials took notice.

In Nicaragua, there is not a strong Internet culture yet — but locals expressed themselves online, too, in newspaper forums. And an anti-Eric Volz video popped up on YouTube, followed by counter-responses produced by still others who had learned about the case from the Internet.

Beyond the case itself, it seemed that traditional media in Nicaragua suddenly found itself at odds with a new, global, social media.

Howard Rheingold, the author of Smart Mobs and a communications expert, believes this is part of an emerging trend.

"The poor people who earn a dollar a day don't have access to the Internet quite yet, but they've always had access to the networks through which rumors spread — and they hit the streets," says Rheingold. "Some of those people on the streets know someone who's connected to the Internet, and I think increasingly we'll see those two worlds merge."

Those worlds are merging in other legal cases, too. Supporters of American videoblogger Josh Wolf, who spent 226 days in U.S. prison, credit a massive online campaign in part with his recent release.

"The question is, is that going to raise the quality of the public sphere, or is this simply going to be a medium that can be manipulated, [where] people become inflamed over falsehoods?"

Volz's case has been forwarded to an appeals court in Nicaragua, and a new hearing is expected in the coming weeks.