Accessibility links
Don't Burn The Gift Wrap Every Christmas, fire departments across the country warn people not to burn wrapping paper in the fireplace. Still, people do it. It's not the worst thing in the world, experts say. But the gift wrap could cause some unwanted and potentially dangerous fireworks. 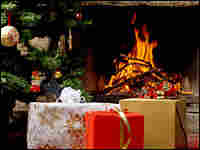 Though experts advise against it, some people toss holiday wrapping paper into a fireplace. iStockphoto.com hide caption 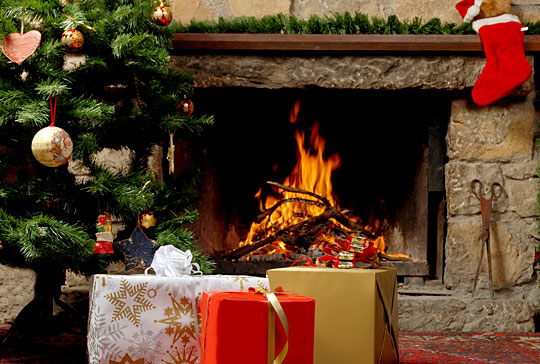 Though experts advise against it, some people toss holiday wrapping paper into a fireplace. 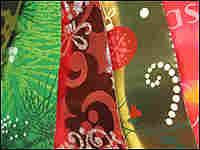 Strips of holiday wrapping paper that were sent for lead testing. All of the samples were determined to be lead-free. Kathleen Masterson/NPR hide caption 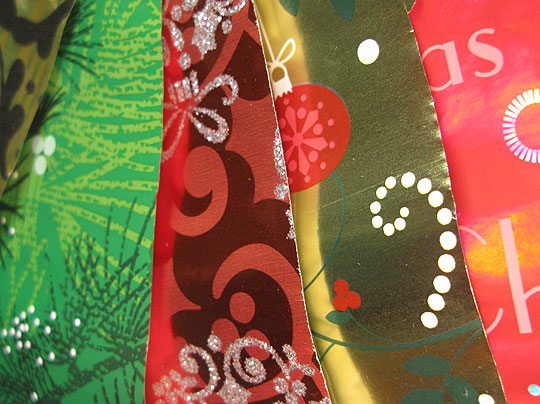 Strips of holiday wrapping paper that were sent for lead testing. All of the samples were determined to be lead-free.

Christmas morning in many homes means unwrapping gifts in front of a cozy fireplace. And every year, local fire departments across the country warn people not to toss all that wrapping paper into the flames, for very good reason: It might start a serious chimney fire.

Still, some people do it. And if they do, they might see strange colors in the flames, like blue and green.

"Just think about fireworks," says Sidney Katz, a chemist who is just starting his retirement after a long career at Rutgers University. He explains that when people watch fireworks on the Fourth of July, "the colored pyrotechnics are different chemical compounds at high temperature."

Something similar can happen in a fireplace if people burn colored gift wrap. Some metals found in certain ink pigments will react with heat. Barium-based pigments are used in some red ink, for example, and when burned could produce a green flame.

About three decades ago, Katz made news during the holiday season because he had bought a bunch of gift wrap, tested it in the lab, and found high levels of toxic metal. He says back then, yellow pigment was often lead chromate.

"My concern was what you do with Christmas wrapping papers," says Katz, noting that "if you burn it, you create airborne particulates which are inhaled."

Or, he says, young children might even chew on the stuff.

Over the years, Katz says, U.S. manufacturers have switched to safer, alternative pigments. "If it's made by Hallmark and it's made with American pigments, it's probably OK," he says. But he adds that it would be impossible for a consumer to look at gift wrap made overseas and know what pigments are in it.

Gary Jones is director of environmental, health and safety affairs for a trade group called Printing Industries of America. He says today's printing ink does use safe pigments, but when something is burned, it can change.

"You know, you're not dealing with a pigment at that point — you're looking at what happened as a result of burning a pigment, or burning a metal," Jones says. He says you would not want to breathe that smoke, or really any smoke at all.

Neal Langerman agrees that breathing any kind of smoke is generally a bad idea. He runs a consulting firm called Advanced Chemical Safety in San Diego. Still, he didn't seem too concerned about the whole wrapping-paper-in-the-fireplace scenario.

"I'll bet I've tossed a crumbled up gift-wrap paper ball in a fire on a holiday on occasion," Langerman says, adding that it's nothing to worry about. He says a fireplace ensures that smoke really doesn't come into the room and produce any meaningful exposure. Instead, it goes up the chimney.

But beware: Burning pieces of paper could also float up the chimney and start a fire. So experts say the safest thing to do is throw out that holiday paper, or recycle it.