Accessibility links
Congress Sets Deadline for Iraq Troop Withdrawal After a heated debate over the war in Iraq, the Senate narrowly passed legislation that calls for U.S. troops to start coming home this autumn.

'Day to Day' Report on the Senate Vote 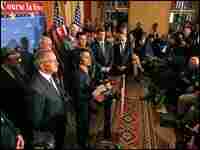 Congressional Democratic leaders and Iraq War veterans hold a news conference after the passage of a war funding bill including a timetable for the withdrawal of troops from Iraq. Chip Somodevilla/Getty hide caption

After a heated debate over the war in Iraq, the Senate narrowly passed legislation that calls for U.S. troops to start coming home this autumn.

The legislation, which passed by a vote of 51-46, sets aside $124 billion to fund the war in Iraq but also sets a clear timetable for the U.S. to begin withdrawing troops, with most U.S. troops due to leave within one year.

For Congressional Democrats, the vote represents a victory of sorts—the first binding legislation on Iraq they've managed to pass since taking control of both houses of Congress in January. But their victory is likely to be short lived. President Bush has said he will veto the legislation when it lands on his desk sometime next week.

Republicans labeled the timetable a "surrender date." Democrats, however, said a new approach to the war in Iraq is long overdue.

"The president has failed in his mission to bring peace and stability to the people of Iraq," said Sen. Robert Byrd (D-WV). "It's time to bring our troops home from Iraq."

Democrats said they would send the legislation to the president on Tuesday, the four-year anniversary of Bush's announcement aboard the deck of the USS Abraham Lincoln that major combat operations in Iraq had ended. The timing, of course, is no coincidence. Democrats clearly hope to use the anniversary, and the president's veto, to underscore what they see as his failed policies in Iraq.

"That is the height of cynicism, and absolutely so unfortunate for the men and women in uniform and their families who are watching the debate," Perino said.

The Senate passed the legislation one day after the House approved the bill, also by a narrow margin.

Meanwhile, Gen. David Petraeus, the top U.S. commander in Iraq, pointed to a recent decrease in sectarian killings in Baghdad as evidence of progress in Iraq. However, he depicted the overall situation there as "exceedingly complex and very tough," saying the U.S. war effort might become more difficult before it gets easier.

"We are just getting started with the new effort," Petraeus said, emphasizing that the president's "troop surge" is only two months old.

Asked at a Pentagon news conference Thursday about the impact on the effort in Iraq if the funding bill were to pass, Petraeus said, "I have tried to stay clear of the political minefields of various legislative proposals."

Petraeus also sidestepped a question about how long U.S. troops would need to remain in Iraq. "I wouldn't try to truly anticipate what level might be some years down the road," he said.

Meanwhile, criticism of the legislation came from Iraq's foreign minister. Speaking to the BBC, Hoshyar Zebari said efforts by Congress to set a date of October for troops to start leaving Iraq would not help his country's security or political development.

It's not clear what the next move will be for Congressional Democrats once, as expected, the President vetoes the legislation. Democrats don't have the necessary votes, a two-thirds majority, to override a veto.

Already, though, some Democratic leaders are said to be drafting new legislation that would be more acceptable to the White House. The fresh legislation might drop a timetable for U.S. troop withdrawal and instead designate benchmarks that the Iraqi government must meet over time, an issue over which some Congressional Republicans and the White House are divided.