Accessibility links
Bush Sets $17.4 Billion In Loans For Automakers President Bush on Friday unveiled a long-awaited plan to bail out the struggling auto industry to avoid bankruptcy and massive layoffs that could deepen the nation's recession, offering carmakers $17.4 billion in short-term financing. 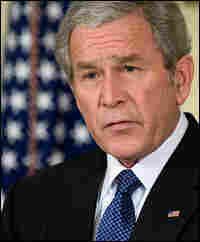 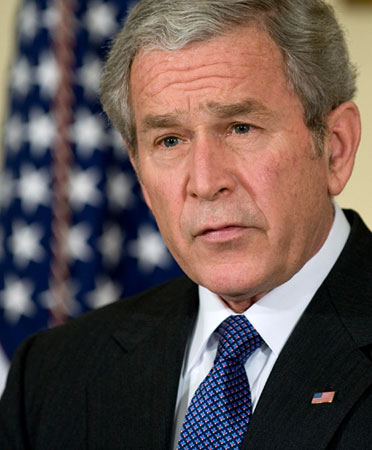 President Bush announces the administration's plan to help U.S. automakers at the White House on Friday.

Speaking at the White House, Bush said General Motors Corp. and Chrysler LLC, both of which have said they are in danger of running out of cash soon, would have immediate access to the money.

"The American people want the auto companies to succeed, and so do I," the president said.

"If we were to allow the free market to take its course now, it would surely lead to bankruptcy and liquidation of the industry," he said.

"Allowing the auto companies to collapse is not a responsible course of action."

Some $13.4 billion — $9.4 billion for GM and $4 billion for Chrysler — would be available through January and would be drawn from the $700 billion fund that was originally earmarked to rescue the financial industry.

But the loans would come with strict conditions. The money could be called back if the automakers cannot prove they are viable by March 31. Executive compensation and other perks would be limited.

"The time to make the hard decisions to become viable is now, or the only option will be bankruptcy," Bush said. "The automakers and unions must understand what is at stake and make hard decisions necessary to reform."

President-elect Obama called the White House plan a "necessary step" to restoring the health of the sector.

The automakers and the United Auto Workers union reiterated Thursday that bankruptcy was not an option. For the UAW, bankruptcy could mean voided labor contracts and renegotiation of benefits.

The White House had been reviewing several options to assist GM and Chrysler, who have sought immediate cash infusions to stay afloat. Ford Motor Co. has said its bottom line is in better shape, but it wants access to government loans if needed in the future.

The automakers said they would do their best to abide by the requirements laid out in the plan.

General Motors said in a statement that the action "helps to preserve many jobs, and supports the continued operation of GM and the many suppliers, dealers and small businesses across the country that depend on us."

"We know we have much work in front of us to accomplish our plan," the company said. "It is our intention to continue to be transparent as we execute our plan, and we will provide regular updates on our progress."

Chrysler Chief Executive Officer Bob Nardelli said his company had signed a "letter of intent" that "outlines the specific requirements that must be achieved."

He said the initial cash injection would assist in helping return Chrysler to profitability.

Ford President and CEO Alan Mulally predicted that the loans would help stabilize the industry even though his company did not immediately need the funds.

"The U.S. auto industry is highly interdependent, and a failure of one of our competitors would have a ripple effect that could jeopardize millions of jobs and further damage the already weakened U.S. economy," Mulally said.

Meanwhile, Treasury Secretary Henry Paulson said Friday that the administration had already allocated the first half of the $700 billion financial industry bailout, and he urged Congress to release the remaining $350 billion.