Accessibility links
Obama Adds To Cabinet; Warns Of Slow Recovery President-elect Obama completed his top Cabinet selections, saying his team of advisers can meet economic challenges but warning that recovery will be years off. Among his choices Friday were Ray LaHood to head the Transportation Department and Hilda Solis for labor secretary. 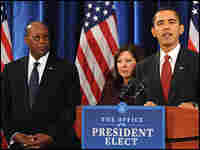 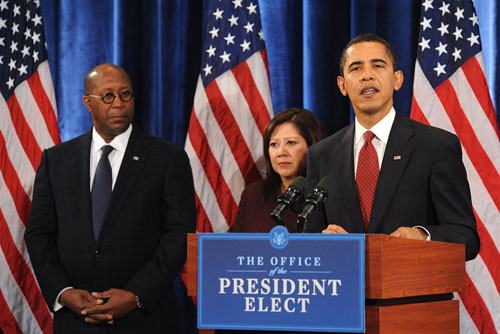 President-elect Obama completed his top Cabinet selections Friday, saying his team of advisers can meet the economic challenges that lie ahead but warning that recovery will be years in the future.

"Daunting as the challenges we are inheriting may be, I am convinced that our team and the American people are prepared to meet them," Obama said. "It will take longer than any of us would like — years, not months. It will get worse before it gets better."

Obama said his team of 15 department heads and Cabinet-level advisers will help his administration implement an economic recovery plan that aims to create 2.5 million jobs.

This month, Obama has put together a diverse team that includes former political rivals and two Republicans. Friday's announcement included:

• Solis, a Democrat, and the third Hispanic named to Obama's Cabinet. First elected to Congress in 2000, she has been a strong defender of labor and supported measures to increase the minimum wage.

Solis is the daughter of Latin American immigrants and a tireless advocate on immigration and women's issues. Her nomination was lauded by labor leaders in California.

"With Solis at the helm, we're absolutely confident that the Department of Labor will return to its primary mission of looking out for the health and welfare of America's workers," said Art Pulaski, executive secretary-treasurer of the California Labor Federation.

Solis, 51, has been honored for her work on environmental justice issues, becoming the first woman to receive the John F. Kennedy Profile in Courage Award for her efforts to protect families in southern California's San Gabriel Valley against toxic substances.

• LaHood, the second Republican to be included among Obama's Cabinet choices. Obama has also asked President Bush's defense secretary, Robert Gates, to remain on the job.

LaHood, 63, represented Illinois in the House of Representatives for 14 years, but he had announced plans to retire. He has a reputation for working with leaders of both parties and worked closely with Obama when the president-elect was in the Senate.

As transportation secretary, LaHood would be a key figure in the implementation of Obama's jobs creation plan, which involves infrastructure improvements.

• Kirk, Dallas' first black mayor. Kirk served as head of the country's ninth-largest city from 1995 to 2001. During that time, he was an advocate for free trade and often traveled overseas to promote the city. He developed a reputation for working closely with business leaders.

Kirk, 54, ran for the U.S. Senate in 2002, but he lost to Republican John Cornyn. Kirk is now a partner in the Dallas office of the Houston-based law and lobbying firm Vinson & Elkins.

Obama's Cabinet selections, which must be confirmed by the Senate, also include two former rivals for the Democratic presidential nomination: Hillary Clinton for secretary of state and Bill Richardson for commerce secretary; Nobel Physics laureate Steven Chu for energy secretary; and Gates, the current defense secretary.

The president-elect has yet to announce his choices for senior intelligence positions, but those are not expected until he returns from vacation.