Accessibility links
Q&A: A Bailout For GM And Chrysler Bypassing a reluctant Congress, the Bush administration says it will loan $17.4 billion to two U.S. automakers, tapping the $700 billion approved for the rescue of financial companies. The companies have until March 31 to come up with viable survival plans.

Q&A: A Bailout For GM And Chrysler

Q&A: A Bailout For GM And Chrysler 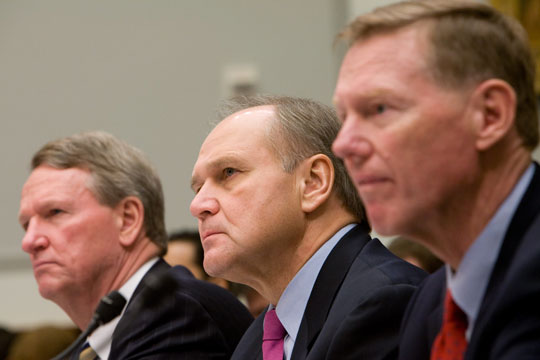 Richard Wagoner Jr. (left), chairman and CEO of General Motors, Robert Nardelli (center), CEO of Chrysler, and Alan Mulally, president and CEO of Ford, testify at a hearing on Capitol Hill in December in Washington, DC.

President Bush on Friday sent a clear signal that U.S. automakers are an essential part of the economy by saying the government would make $17.4 billion in loans to General Motors and Chrysler. The loans, which Congress had failed to approve, are an effort to keep these companies afloat in the near-term and to give them a stepping stone to achieving long-term viability.

The car companies have until March 31, 2009, to come up with viable plans for their survival. Here, a look at whether this will be enough time and whether consumers will be any more interested in purchasing cars three months down the road.

Will the loans make a difference?

"The economy couldn't take the failure of these companies in a disorderly way," says Dennis Jacobe, chief economist for Gallup, echoing the president.

Jacobe says the loans will give the automakers a fighting shot at survival. All of the debate about whether to rescue the industry has had a somewhat negative impact on the perception of these companies. "But our polling has shown that most Americans will buy an American-made auto," he says.

Where will the loans come from?

The loans will come from the bailout funds administered by the Department of Treasury known as the Troubled Asset Relief Program (TARP). A Treasury official said that of the first $350 billion set aside under TARP, only $15 billion has yet to be allocated. Much of that money was already spoken for, but since it has yet to leave the Treasury's coffers, it's still available to tap for other purposes.

What are the terms of the loans for each automaker?

Chrysler will receive a $4 billion loan on Dec. 29. There are no loans being made to Ford at this time as the company has previously said that it doesn't need immediate financial assistance.

The loans to GM and Chrysler are for a term of three years. However, if the companies fail to meet the loan terms, the president's designee can accelerate the loan so that the companies must repay it within 30 days, according to the Treasury official. If things don't go well for the automakers, the Treasury will have first priority over any assets that cold be sold.

Both GM and Chrysler will also have to provide the government with warrants, or guarantees, that will give the government the ability to buy the companies' stock at a specified price.

The loans will also require the companies to limit executive compensation, including no bonuses or incentives for their 25 highest-paid employees.

President Bush said he hopes the loans will help give the automakers time to put plans in place to restructure into viable companies. If that isn't possible without filing for bankruptcy, he said, the loans will give them time to set up "an orderly Chapter 11 process that offers a better prospect of long-term success."

What concessions will automakers have to make and will their present executives stay on board?

The conditions of the loan have some historical precedents. Brian Johnson, senior equity analyst who watches the auto industry for Barclays Capital, says it resembles the help the government extended in 1979 to Chrysler, which came with "hard targets imposed by Congress." (In 1979, Chrysler engaged in a five-month battle to get government loans to prevent filing for bankruptcy. Congress passed the Chrysler Corporation Loan Guarantee Act of 1979, which ultimately provided the company with $1.5 billion in loan guarantees.)

By March, the automakers will have to show a plan for long-term viability. That plan must include cutting their outstanding debt by two-thirds of their outstanding debt; they'll have to cut half of the contribution they make to an independent health care trust fund; they'll have to alter wages and benefits by the end of 2009 to fall into closer alignment with those offered by foreign automakers, such as Toyota and Honda, that operate in the U.S.; and they must eliminate their jobs-bank programs, which help autoworkers who are laid off to find new jobs.

Will consumers have a stronger appetite for car purchases three months from now?

It seems unlikely, especially based on recent polls conducted by Gallup.

"I think it's going to take probably longer than that but it's all a matter of how much of a shock all of the financial crisis has been to the average consumer," Jacobe says. "Our most recent consumer surveys show consumer confidence remains very negative, particularly upper-income consumers are pessimistic."

How much time will it take for the automakers to be deemed viable?

The loans are an effort to help the companies create long-term viability, but it's not clear how much time the car companies will have to prove that they can survive.

President Bush said the loans would "give the auto companies an incentive to restructure outside of bankruptcy." But he also made it clear that by March 31, both GM and Chrysler's restructuring plans would have to address three major issues: creating sustainable retirement plans; convincing bondholders to transfer debt into capital that the companies can use now; and bringing wages more into line with foreign automakers operating in the U.S.

Where does this leave the United Auto Workers?

While the automakers welcomed the loans, the terms of the deal are not so appealing to the United Auto Workers.

"While we appreciate that President Bush has taken the emergency action needed to help America's auto companies weather the current financial crisis, we are disappointed that he has added unfair conditions singling out workers," says UAW President Ron Gettelfinger.

Johnson of Barclay's Capital says the "new terms set up a new round of brinksmanship" between the government, the union and automakers. The enforcement of the terms will fall to the Obama administration. The Obama designee could be less demanding than Secretary Paulson. Johnson expects the UAW to lobby Congress and the Obama administration to "loosen the strings," on some of the conditions of the deal — including the call for autoworker compensation to fall in line with what foreign automakers pay U.S. workers.