Accessibility links
An Irish Christmas With Dervish And Friends One of the biggest traditional bands in Ireland, Dervish took its act to Lissadell House in County Sligo — a favorite spot of W.B. Yeats — to make a special Christmas recording. Piper Paddy Moloney of The Chieftains and vocalist Roisin O'Reilly guest star.

Listen
An Irish Christmas With Dervish And Friends

An Irish Christmas With Dervish And Friends 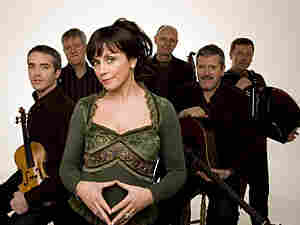 Originally formed in 1989, Dervish is preparing a new hourlong public radio series set to debut in early 2009. Courtesy of the artist hide caption

While growing up in County Sligo, Ireland, renowned poet William Butler Yeats frequently visited the imposing Lissadell House overlooking Sligo Bay. The 1834 mansion was immortalized in one of Yeats' poems:

The light of evening, Lissadell,
Great windows open to the south

Lissadell House is also where Dervish, one of the biggest traditional bands in Ireland, recorded its new Christmas special. The show, part of a new public radio program Irish Heartbeat With Dervish, features musical guests Paddy Moloney of The Chieftains and vocalist Roisin O'Reilly. With Dervish vocalist Cathy Jordan hosting, the program weaves together the music of Christmastime in Ireland.

"We had the most delightful day at Lissadell House," Moloney said after the recording. "Roisin has a beautiful voice, and Dervish are so Irish, so wonderful, with all the power of traditional music."

The members of Dervish provide spirited backing on fiddle, accordion, flute, bouzouki and guitar. The show ends with a finale from all the musicians.

Click the link at the top of the page to hear highlights from Dervish's Christmas special.