Accessibility links
U.S. Officials Look for Political Solution to Darfur Earlier this month, Assistant Secretary of State for African Affairs Jendayi Frazer paid a visit to Sudan along with Deputy Secretary of State John Negroponte, during which the delegation met with Sudanese President Omar al-Bashir. Melissa Block talks with Frazer.

Earlier this month, Assistant Secretary of State for African Affairs Jendayi Frazer paid a visit to Sudan along with Deputy Secretary of State John Negroponte, during which the delegation met with Sudanese President Omar al-Bashir. Melissa Block talks with Frazer.

Now, to talk about U.S. policy towards Sudan, we're joined by Assistant Secretary of State for African Affairs Jendayi Frazer.

She was in Sudan earlier this month with Deputy Secretary John Negroponte. They visited a refugee camp in Darfur, and they met with Sudanese President Omar Bashir. Ms. Frazer, what was your message to President Bashir on the war in Darfur?

Dr. JENDAYI FRAZER (Assistant Secretary of State for African Affairs): Well, the basic message was that the government of Sudan needs to take responsibility for ending the humanitarian crisis and the war in Darfur.

On the security situation, he pushed the government of Sudan to disarm the Janjaweed and to accept an international peacekeeping force, the hybrid force of U.N. and African Union forces.

And on the political process, he urged that they be flexible in terms of negotiating with the rebels, the nonsignatory rebels, so that the Darfur Peace Agreement could be implemented.

BLOCK: How would you describe the tone of that meeting you had this month with President Bashir?

Dr. FRAZER: The tone was a government that was not acknowledging its own responsibility. President Bashir blamed everybody else for the problems in Darfur and didn't own up to the government of Sudan continues, even as latest April 23rd, to bomb civilian villages in northern Darfur.

So they were saying that the humanitarian situation has actually gotten better, but that's not because of anything that the government of Sudan has done. That's because the American people have been generous and have provided billions of dollars of humanitarian aid over the last couple of years to Darfur.

BLOCK: And the tone from the U.S. side?

Dr. FRAZER: I think the tone was one of saying, look, we need to move forward on stabilizing the security situation in Darfur. You need to accept an international peacekeeping operation. There was a push to say you need to implement the Darfur Peace Agreement, particularly your commitment to disarm the Janjaweed. It's in the power of the government to do so.

BLOCK: You have met yourself with President Bashir several times before. Have you ever known him to come through on anything that he's promised you?

Dr. FRAZER: Well, it's always very difficult - not on the first take. It's always back and forth, back and forth, continuing to push. And so he has agreed with the U.N. on humanitarian access. We're looking to see to what degree the government actually implements that agreement. And so in some parts, yes, there's sort of off-and-on implementation then blocking progress.

BLOCK: President Bush spoke at the Holocaust Museum here in Washington last week and he said: The time for promises is over. President Bashir must act.

But if you look back, you'll see a lot of statements, say, from the special envoy to Sudan, Andrew Natsios, who gave a January 1st deadline, saying that punitive action will be taken if Sudan didn't step up to the plate.

It's now April 26, no punitive action has been taken. Why should the government and why should President Bashir take U.S. threats seriously at this point?

Dr. FRAZER: Well, the United States does have sanctions. We've had sanctions on the government of Sudan, and we're prepared to tighten those sanctions and to do so, both unilaterally as well as to work with the U.N. to try to have sanctions imposed multilaterally.

BLOCK: Well, how long would you hold off then until action is taken?

Dr. FRAZER: Well, President Bush, in his speech, said it's a matter of weeks.

BLOCK: When the U.N. Security Council passed a resolution last August mandating a U.N. peacekeeping force in Darfur, did you think it would be eight months and no peacekeepers would be in Darfur?

Dr. FRAZER: No, I did not. I thought at that time that the international community was fairly united around U.N. Security Council Resolution 1706. I was disappointed that, in fact, we haven't been able to deploy a peacekeeping force after the passage of that resolution.

BLOCK: And what do you chalk that up to?

Dr. FRAZER: I think that, very clearly, there were many countries, including in the Gulf states, Arab countries, that were not comfortable with 1706.

Dr. FRAZER: That's the Security Council Resolution. And as a result, Kofi Annan held a meeting of the main stakeholders in Addis Ababa in November, which led to a compromise with the government of Sudan that being a hybrid force - an African Union, United Nations hybrid force. And so he took us on another track of diplomacy. And so that's what we are working on now. It's part of the process of international diplomacy to try to bring others on board.

BLOCK: Jendayi Frazer, thanks very much for talking with us.

BLOCK: Jendayi Frazer is the assistant secretary of state for African Affairs. You can read about the deep roots of the Darfur conflict at npr.org. 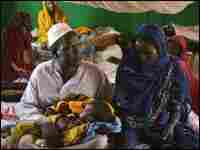 The new head of the U.N. World Food Program is visiting Darfur, where more than 200,000 people have been killed and millions have been displaced by fighting between African rebels and Arab militias known as janjaweed, which are backed by government troops.

The war in Darfur in western Sudan has been going on for four years now. A peace deal was signed last year, but fighting continues, despite the presence of some 7,000 African Union troops who have been deployed in Darfur for the past year.

Sudan's central government in Khartoum is reluctant to allow foreigners access to the territory; it has accused aid workers of inflating the crisis.