Accessibility links
Days Of Easy Growth Over, A Business Adapts It's understandable that landscaper Christy Webber's partner would call her the Golden Goose. After all, she often sees opportunities before anyone else. Her biggest work project was on Chicago's Millennium Park. But now, her task is to realign her business so it can survive a slowdown.

Listen
Days Of Easy Growth Over, A Business Adapts 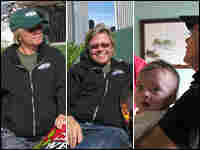 Christy Webber in her roles as (from left) boss, worker and mother. Ketzel Levine/NPR hide caption 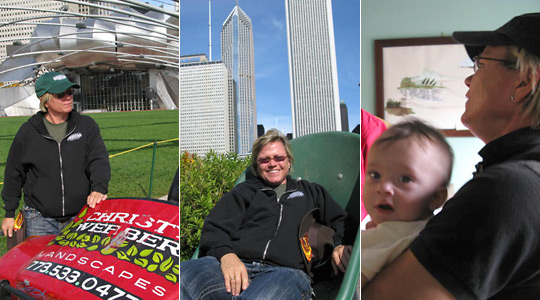 Christy Webber in her roles as (from left) boss, worker and mother. 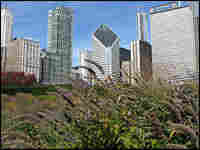 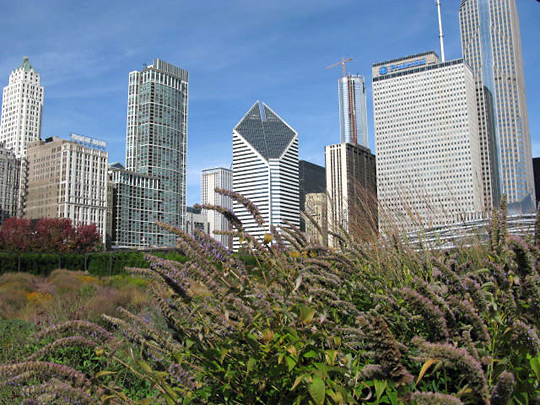 Caution is not a big word in Christy Webber's life. Every business decision she's made has been a leap into the fray. That could be one of the reasons why she's one of Chicago's most successful landscapers. That, and the fact that she's always had a knack for seeing opportunity before it dawned on everyone else.

Webber's best known for her company's installation of the world's biggest rooftop garden, Chicago's Millennium Park. It was a massive municipal contract. These days, as the budgets of all her clients shrink, her new challenge is to realign her business to survive the economic downturn. Her 250 employees are counting on her.

Even as things slow down in Chicago, Webber can't complain much when she looks at her life — she has her work as well as her partner, Jennie Rule, and her 9-month-old son, Oliver Rule Webber. "We're blessed," she said. "I have to admit, we're blessed."

Webber is "built to work," as she likes to say. She has wide feet, wide hands and a center of gravity that's low to the ground. She was just one among many gardeners when she started out, working on Chicago's moneyed North Shore.

But then Webber found her niche: in the broken heart of the inner city, where decades of neglect had taken their toll. She had just set up shop in the unfashionable West Side when the city elected its second mayor by the name of Daley — and this Daley was looking to paint the town green.

"So that was the smartest thing I could ever have done," Webber said, "was just to say, screw it, I'm not going to go to the fancy suburbs, I'm going to stay here in Chicago."

Her timing was uncanny. She hitched her wagon to the mayor's momentum and in a few years, she had clients on waiting lists and an increasingly spoiled staff.

Many of her long-time employees got used to a simple formula for landing work: "If they just called somebody back, we got the business," Webber said, "because no one called anybody back."

The economy of just a few years ago now feels like history — a boom time on the third coast, as it was for so many American businesses.

Her company is called Christy Webber Landscaping. Its holdings include 110 trucks, 46 trailers, 26 Bobcats, and 250 employees. And then there's the company's eco-wonder of a complex, ranked among the greenest buildings in the world.

"I needed two big pole barns, six double-wides and some land," Webber said. "That's all I needed. But to get the land, I had to build the Taj Mahal. So I did."

Now she has to pay for it — and make that large payroll. That means designing gardens, mowing grass, snow-blowing boulevards, selling Christmas trees and never saying no.

"Our whole mantra was that we won't take on any jobs under $5,000," Webber said. "And we're going to have to come down a couple of notches. There's a lot of Chicagoans out there that want six bushes and some sod, and that's good because we need that work."

And the people in Webber's orbit need that money, whether they are her charities, her staff, her banker or her family. After all, she lives in a just-renovated 4,500-square-foot Victorian.

In an economy where even the most golden of geese could end up cooked, that's a lot to think about — but not necessarily worry about, Webber says.

"Well, I hope I have enough going for me now that I wouldn't have to sell my new house," Webber said. "This building and all that, we'll be fine, even if we lost this. But I think the biggest thing that's taken me the longest at my age is to save and to really have a decent house for my family. A real house — I call it a big girl's house."

Asked if it's something she's afraid of losing, Webber answered, "Yeah."

At 47, Webber would like to think that her days on the crew are over. But she says she'll throw her weight behind any job that needs doing — within reason.

"There are times when I've taken some really stupid risks — add in Millennium Park," she said. "But the thing that doesn't scare me is that I'm not afraid to start from scratch."