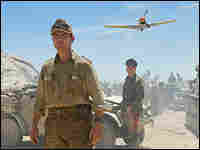 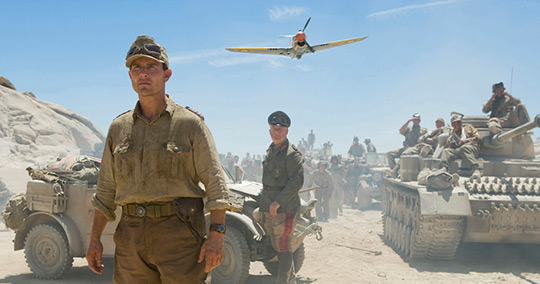 Tom Cruise stars as Col. Claus von Stauffenberg, who led a plot to kill Hitler, in the suspense thriller Valkyrie. 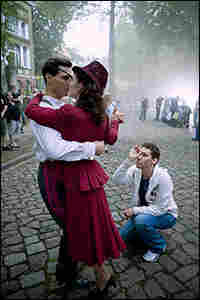 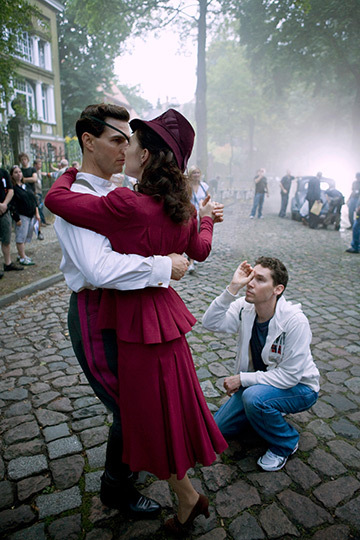 Director Bryan Singer coaches Tom Cruise and Carice Van Houten on the set of the film.

In Tom Cruise's new movie, Valkyrie, he and director Bryan Singer tell a story with an ending most audiences might think they know.

Cruise plays Col. Claus von Stauffenberg, who was at the center of a plot by German generals to assassinate Hitler, take over the government and surrender to the Allied forces during World War II. Kenneth Branagh, Bill Nighy and Terrence Stamp round out the cast of generals.

"When you delve into the history and look at these men, they had opposed Hitler almost right from the beginning," Cruise tells Scott Simon. Von Stauffenberg, he adds, is on record as early as 1938 as saying, "Someone's gotta shoot that bastard."

Cruise says he already knew parts of the story when he first saw the script. "I thought I knew where it was going to go and what was going to happen," he says. But the storytelling drew him in.

"I found it utterly compelling," Cruise says. "I found the story to be very uniquely told, this conspiracy suspense thriller. And I found it to be very entertaining, and also a story that I hadn't heard."

What The Audience Doesn't Know

While everyone knows that Hitler didn't die by an assassin's hand, Singer says that fact didn't get in the way of creating suspense.

"Well, we have two things going," he explains. "For most people, they don't quite know the ending of this particular story." The plot was much more than just an attempt on Hitler's life, Singer says, noting, "There was an actual attempt to take over the entire Nazi government."

People may think they know what happens, he says, "but it's not necessarily what does happen, and there'll be some surprises for them."

In fact, American audiences might find themselves cheering for German soldiers as they storm military headquarters and seize control — temporarily.

When Valkyrie was being filmed in Germany last year, several German legislators reportedly were distressed that Cruise had been cast in the lead role. Von Stauffenberg is one of the few genuine German heroes of World War II. And Tom Cruise is well known as a member of the Church of Scientology, which the German government has criticized as a confidence scheme.

Cruise stressed that the reports about objections to his casting weren't true, and Singer added that there had been much misinterpretation.

"Misinterpretation," Cruise says, "and really, even those comments within the country and the government were only from extremists. Yeah, it's not true."

"I think initially there might've been a knee-jerk reaction," Singer says. "This story is very special to Germany and to their history and to a very, very dark and terrifying history during the second world war. So there might've been a knee-jerk reaction, thinking, 'Oh, the director of X-Men and Superman Returns, and the star of Mission Impossible are coming here to make some kind of action film out of it and distort the history.'

"But even very early on, we had tremendous support from the Resistance Museum," Singer says. "We were given access to all their materials, documents. We had meetings with historians, people who were there at the time."

"Every location we needed and asked for," adds Cruise.

This included Bendlerblock, where von Stauffenberg and three other plotters where shot to death by a firing squad when their attempt at a coup failed. The building in Berlin is still the headquarters for the German military, and a plaque bearing their names below the inscription "Here Died For Germany" rests in the courtyard.

Before filming the execution scene, Cruise and Singer spoke to the actors and film crew.

"It was a very powerful moment," Cruise says. "It's sacred ground for them and definitely for us. These men and women, who were diametrically opposed to the Nazis and National Socialism and Hitler. So we did take a moment."

"And I asked for a moment of silence," Singer adds. He says that may be the only monument to Germans who served during World War II. "The rest of that history is so shameful and so hard for Germans to recognize. So for us, to be filming in the very spot where that happened, that's the least we could do and hopefully make the best film we could."

Valkyrie opens with an oath. Hitler made army soldiers swear they would follow him to their death. "It took me a while to wrap my wits around that," Cruise says. "And every time we read it, it's chilling."

"This is an army with tradition, with honor," Singer says. "In spite of that — the deeds they were capable of — this was the inner conflict. Hitler was in a constant war with his army, in a strange way, and these conspirators represented the group that went against the tide."