Accessibility links
Wait, Keith Richards Is 65? Defying all medical science, the guitarist behind so many iconic Rolling Stones riffs has crested the halfway point of his seventh decade. NPR's music librarian Robert Goldstein wishes him a happy birthday. 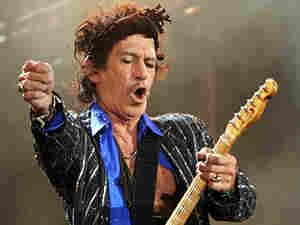 Amid the hustle and bustle of another holiday season, the upcoming Obama inauguration and the spreading gloom of the economic crisis, you might have forgotten about a December birthday that represents a real milestone. Listen carefully: Keith Richards of the Rolling Stones is 65.

Let me repeat that: Keith Richards is 65.

As the founding guitarist of the Rolling Stones, his countless iconic guitar riffs deservedly occupy mythic status — right up there with his equally legendary drug-fueled, debauched past. What you may have forgotten is that using those riffs, he has co-written some of the most acclaimed and enduring songs in all of popular music.

Beyond providing the tired (but not necessarily untruthful) quip that this event defies both medical science and every known actuarial table, there must be a deeper significance here. Right?

In today's music business, a field of endeavor where creativity can be measured in fruitfly lifespans, and where a lengthy career compares unfavorably to that of the average NFL player, Keith Richards is a titan. He's the surprisingly still-living embodiment of everything we think of, everything it has come to mean to be a rock musician.

And in a world where we are being told what we might like based on what we liked before, it becomes ever more difficult to recognize the true archetypes who walk among us.

It seems very unlikely there will ever be another Keith Richards. Who currently — and from a considerable geo-cultural distance — could totally absorb a foreign music — in this case black American blues and R&B — not as a tourist, but as a true believer? And then, by his instinctive expression of that assimilated music, personify the ethos of a younger generation desperate to hear itself? And let's not forget, also make an ungodly fortune in the bargain?

I've been listening to Keith from the beginning — that's over 40 years. Never a guitar virtuoso (at least not in the commonly understood "musical" sense of the word), his playing has always been intrinsically in service to his band and its songs.

But with any great artist who forges his own musical path, the marvel and pleasure is not so much in how he played. It's how he chose to play.

Robert Goldstein has been NPR's music librarian for 15 years. In a former life he was the guitarist for the band Urban Verbs, which recorded two albums for Warner Bros. Records.