Accessibility links
Natacha Atlas: Acoustic Takes, Arabic Classics She's best known for her electronica-tinged approach to Middle Eastern music. But for her latest release, Atlas takes an all-acoustic approach to folk songs from around the globe, from the Arab world to Appalachia.

Ya Laure Hobouki [Oh Laure, My Love to You] 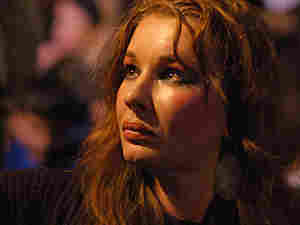 Natacha Atlas is best known for electronica takes on Middle Eastern music, but her new album is all acoustic. Richard Kaby hide caption

The music of Natacha Atlas is as complex as her personal history.

Her father was Egyptian, her mother British. She lived in a Moroccan neighborhood in Brussels as a child, but then moved to the U.K. And you can hear the influence of her background in her music.

With her recent release Ana Hina, she's recorded her most acoustic and traditional album yet. On the recording, Atlas performs folk songs from across the globe. For example, the first track remakes "Ya Laure Hobouki," popularized by legendary Lebanese singer Fairuz and penned by the successful songwriting team the Rahbani brothers.

"I've heard their stuff since I was a teenager, so I've always wanted to do some of those old songs," she says.

Atlas spoke with Alison Stewart about interpreting songs from the Middle East, Sudan and even Appalachia — and making them her own.

"It isn't a conscious effort to go, 'I'm just going to fuse this all together,'" she says. "It just sort of happens naturally. You just do what you do, 'cause that's what you do."