Accessibility links
Fla. Company Plans to Develop Thousands of Acres Roughly 800,000 acres are being readied for development in Florida's panhandle region — and they're all held by a single company. The state's largest private landowner has transformed itself from a paper manufacturer into a real-estate developer.

The first of a three-part series. 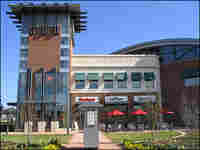 Southwood, located in Tallahassee, Fla., is one of St. Joe's first developments and is an example of the company's "New Urbanist" philosophy. Greg Allen, NPR hide caption 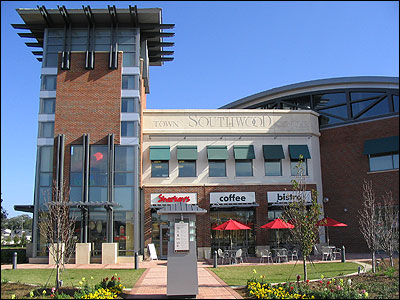 Southwood, located in Tallahassee, Fla., is one of St. Joe's first developments and is an example of the company's "New Urbanist" philosophy. 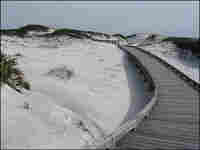 Beach access in the Watercolor development, located about halfway between Pensacola and Panama City, Fla., is restricted in part to preserve the habitat of the endangered Choctawhatchee beach mouse. Greg Allen, NPR hide caption 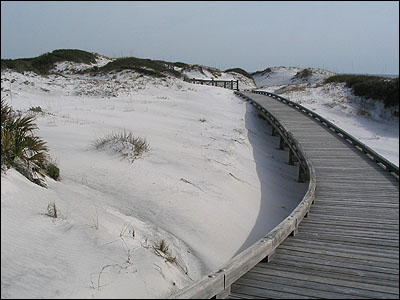 Beach access in the Watercolor development, located about halfway between Pensacola and Panama City, Fla., is restricted in part to preserve the habitat of the endangered Choctawhatchee beach mouse.

Developers are setting their sights on Florida's "Forgotten Coast," a largely untapped area from Pensacola to Tallahassee. Roughly 800,000 acres in Florida's panhandle are being readied for development — mostly pine forests, but also wetlands, undeveloped coastline and habitat for wildlife from black bears to red-cockaded woodpeckers.

And it's all held by a single developer: the St. Joe Co.

When people talk about the company's land holdings, they often bring up states, as in "nearly as large as the state of Delaware." That was how much land St. Joe owned several years ago. Now, its holdings are more accurately described as "nearly as large as Rhode Island."

That makes the company Florida's largest private land owner. As St. Joe spokesman Jerry Ray says, the company got there by adhering to an overriding principle.

"This is a company that never sold any land. To sell land was forbidden in St. Joe Company," Ray says.

The story of St. Joe begins with Ed Ball, a member of the DuPont family. In the 1920s, he began what became decades of land-buying in Florida — land that eventually became the St. Joe empire. The DuPonts had a lot of money; Florida land seemed like a good investment; and during the Depression, Ball was able to get it at rock-bottom prices.

For 70 years, St. Joe was mostly a paper company, harvesting and replanting pine trees on its hundreds of thousands of acres and operating a paper mill in the panhandle town that gave the company its name. But by the 1990s, declining profitability in the paper business and the rising value of Florida land led St. Joe to adopt a new business model. Almost overnight, the company reformed itself as a real-estate developer — with vision and ambitions nearly as large as its million-plus acres of land.

An example of what St. Joe has in mind can be found in Tallahassee at a 3,300-acre development called Southwood, which includes a town center, schools and a golf course. Plans for the Southwood development began in the 1980s, before St. Joe had redefined itself as a full-fledged real-estate developer. At that time, the area southeast of town was just forests and rolling farmland.

The key to the project turned out to be 273 acres that St. Joe donated to the state of Florida to build an office complex. The state improved roads serving the area and moved hundreds of jobs to the new facility, which today sits at the center of the development.

Donating land or selling it to the state at favorable prices is a strategy that St. Joe has used time and time again to build the value of its property before it's developed. Ray says that after years of never parting with any land, St. Joe now feels a civic duty to help build new roads, hospitals and even airports in areas that up to now have been underserved.

A company as large and powerful as St. Joe certainly is bound to have its share of critics. It's involved in several lawsuits brought by individuals and groups trying to stop its developments.

Charles Pattison, executive director of 1000 Friends of Florida, a growth-management watchdog group based in Tallahassee, says St. Joe takes a different approach than most developers because of its size.

"We've found them to be pretty responsible. Their quality of development is higher than a lot of the developments we see around the state," he said. "I think that the real issue is that they are so big that they will make some fundamental changes even if they develop modestly in this part of the state, just because we haven't seen that kind of development."

One of St. Joe's premier projects, Watercolor, is a high-end beach community about halfway between Pensacola and Panama City. But Watercolor is different from other beach communities: No houses overlook the beach. Instead, behind the beach are dunes that are habitat to the endangered Choctawhatchee beach mouse.

St. Joe's timeline for the 800,000 acres it owns in Florida extends out at least 50 years. The company says the pace of development in the panhandle is likely never to approach the building booms of central and south Florida.

After 10 years as a developer, Ray says St. Joe has built on only 1 percent of the land it owns. But there's another number he talks about, one that's at the bottom of the company's decision to use its land for people, not for making paper. Twelve million new residents are expected to move to Florida over the next 25 years — a number that's roughly the population of the state of Pennsylvania.

The St. Joe Co. wants many of them to consider moving to a new home in Florida's panhandle.