Accessibility links
Markets Bustling As Truffle Season Begins In France There is an atmosphere of intrigue as truffle sellers line up carrying les truffes noires, the famous black truffle of the Perigord region of France, in their baskets. They will fetch anywhere from $250 to $400 a pound, depending on their quality. 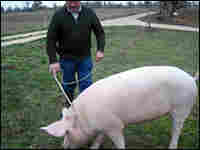 Paul Pinsard hangs on to Kiki, his 300-pound sow, as she sniffs for truffles. Eleanor Beardsley for NPR hide caption 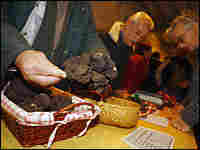 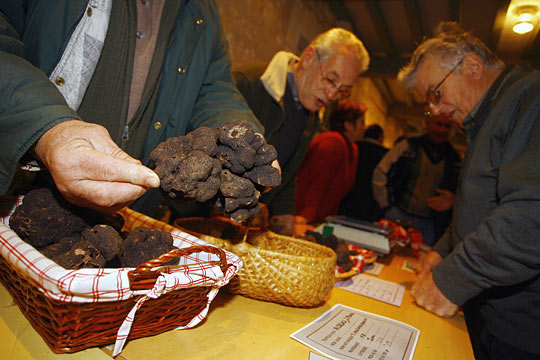 People look at black truffles during a truffle market in Jarnac in western France on Dec. 9.

In France, December is the beginning of truffle season. In Paris restaurants, the pungent delicacy commands high prices at holiday time.

To get a look at the fungus's more humble origins, you can visit a truffle market, where they're sold for big bucks almost immediately after being pulled out of the ground.

At one truffle market in southern France, the excitement builds as people pour into the village square. Sturdy-looking country folk arrive in the town of Lalbenque carrying baskets of various sizes; the contents are kept secret by a covering dish towel.

There is an atmosphere of intrigue as the truffle sellers line up behind a row of benches, separated from buyers and interested onlookers by a string cord. Inside the baskets are les truffes noires, the famous black truffle of the Perigord region of France. They will fetch anywhere from $250 to $400 a pound, depending on their quality.

"All these truffles are different and vary from village to village, according to the weather, the geology and the soil," says Alain Ambielet, head of Lalbenque's union of truffle growers. "They range from the size of a walnut to a man's fist; but it's not the size that counts, it's the perfume and taste."

Many of those selling their baskets of "black diamonds," as the truffles are known here, are professionals. Others, like Huguette Cirac, 75, gather truffles as a hobby.

Cirac says it's a way of life and a passion.

"You've got to have a lot of patience to gather truffles," he says. "I learned to do it from mother, who did it her whole life. My daughter is a nurse over in Toulouse, but I'm sure she'll end up truffling one day, too."

With the trill of a whistle, a red flag drops and the market officially opens — and things get serious as the haggling begins.

Buyers flick and scratch at the dark brown lumps, testing their quality and maturity. Truffles bought here will be consumed within days in the shops and bistros of Paris, tucked into omelets or stuffed into fois gras. By then, their price will have tripled.

Truffles are a type of fungus, related to mushrooms and toadstools, that grow around the roots of oak trees. Most farmers today use dogs to help sniff them out. Some, like Paul Pinsard, use a pig.

Pinsard says pigs are superior to dogs at sniffing out a perfectly ripened truffle from beneath the soil. Today, he's going truffle hunting with his 300 pound sow, Kiki.

"The way you train a pig to find truffles is to start them very young and feed them truffles until they really love them. And when they do, you start hiding them. But the hardest thing is getting them to follow you on a leash," he says.

When Kiki decides to take off, Pinsard is clearly the one who is following on the leash. While Kiki obviously loves her work, Pinsard says she'll be retiring soon. She's just too big. He's already grooming her replacement, a tiny and more manageable 2-month-old piglet.