Accessibility links
Gritting It Out Amid The Dirt In Chicago The city's Millennium Park is a living reminder of the tough challenges that popped up along the way for Christy Webber's landscaping firm. Now she and one of her employees are both hoping to weather the economic crisis.

Listen
Gritting It Out Amid The Dirt In Chicago 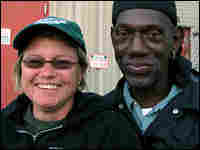 Christy Webb and Harry Jenkins look back on tough days — and toward a brighter future. Ketzel Levine/NPR hide caption 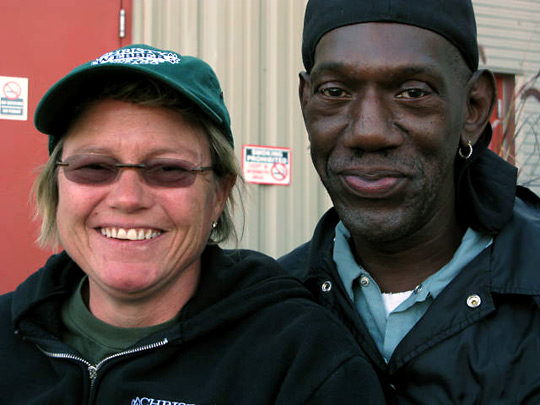 Christy Webb and Harry Jenkins look back on tough days — and toward a brighter future. 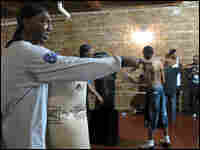 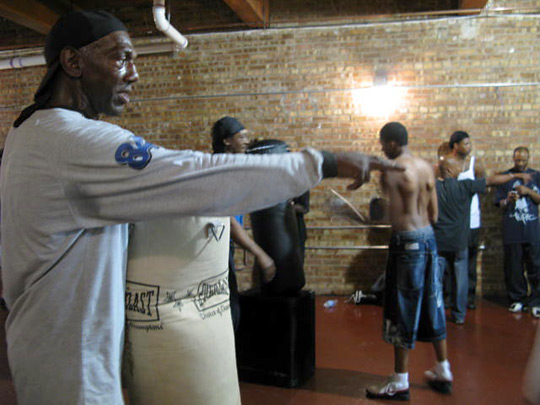 Harry Jenkins coaches boxing for young men at the Carrol Street Center on Chicago's West Side.

Driving around downtown Chicago with landscaper Christy Webber is like going on a tour of her own private park. Near City Hall, evidence of her work abounds.

"All these trees you see here on Michigan Avenue?" she says. "Yep. We planted them."

On daily display to millions, the beautification of a city that's now considered a template for the buzzword "green" would seem the ultimate accomplishment.

"Oh yeah, it was a hell of a job," Webber says. "It was really ... it was painful," she says, pausing, at an uncharacteristic loss for words.

The tree installation in downtown Chicago was the first phase in a multiyear project that nearly ruined Christy Webber Landscaping, a period of time Webber now calls "The Millennium Park Years." And the way she says it is reminiscent of one of Hollywood's most memorable lines: "Forget it, Jake. It's Chinatown."

The Makings Of A Cautionary Tale

Arriving at Millennium Park, Webber is greeted by one of her maintenance crew bosses. Webber absconds with one of her company's bright red landscaping carts to cruise the scene of the crime: the installation of the world's largest rooftop garden.

The park itself, crowned by architect Frank Gehry's outdoor concert pavilion, is a stirring piece of landscape architecture that has become a magnet of urban energy and an ennobling people's park. The back story is less inspiring.

"It took me almost three years to even be able to come down here," Webber says, "because I lost so much money trying to put this park together. Three years before I could even say, 'We did this!' "

In 2001, taking on such an enormous installation was an enormous stretch for Webber. Call it part moxie, part denial. In the end, she lost half a million dollars in an experience with all the makings of a cautionary tale.

"I aged 10 years on this project. I really feel like I did," Webber says. But when asked whether she considered giving up the business, she's adamant.

"Oh no! Never! Are you kidding?" she says. "I just got right back at it and thought, 'Why aren't we cutting the grass over here?' So now," she says with a wry laugh, "we maintain it!"

'It Ain't The End Of The World'

Grounds maintenance and residential work may be the ticket that keeps Christy Webber Landscaping afloat during the economic recession. That bodes well for her 250 employees — including a man no one else would hire.

Harry Jenkins is tall and thin, with a hoop in his ear and aged eyes that could break your heart. He is 50 years old.

"I made one mistake in my life," he says. "One mistake. I can tell you, but I don't like talking about this."

Convicted of attempted murder when he was a teenager — his weapon was his fists — Jenkins spent 28 years in jail. Afterward, he had a predictably hard time finding a job. Those lean years may give him an edge during the slowdown. That's because Jenkins knows what it takes to get by.

"It ain't the end of the world," Jenkins adds. "Although you don't like the situation that you're in, think about the people sleeping on the streets, begging for money. And you say to yourself, 'I'm grateful I'm not in that situation. I don't know what I'd do!' "

Jenkins says he turns to God for moxie and for other things beyond his control. These days, he prays fervently that his employer stays flush with work.

His boss, Webber, is also working her connections, determined to hold on to her business — and every one of her staff.

Looking For Moxie, And Finding It

Looking For Moxie, And Finding It 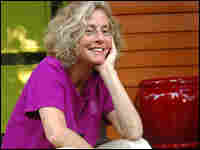 Correspondent Ketzel Levine found that her own story dovetailed with a series about Americans facing setbacks at work. Serena Davidson hide caption 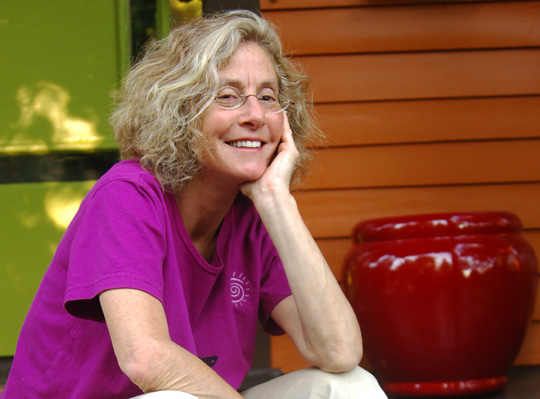 Correspondent Ketzel Levine found that her own story dovetailed with a series about Americans facing setbacks at work.

My name is Ketzel Levine. I'm a senior correspondent for National Public Radio — and as a direct result of the current economic crisis, I have been been laid off from my job.

I was told almost two weeks ago, but it's only today that I'm sane enough to tell you. I've been spending most of my time careening around the five stages of grief — doing each of them a disservice, I might add. But I figure there'll be time enough later to revisit each one at least a few more times.

Meanwhile, here's what I know about moxie: It is a magical elixir, just as advertised in the 1870s when it was brewed from botanicals like the gentian root, a sublime plant with an otherworldly blue bloom.

The thing about gentians — all flowers, really — is that they're easy to miss if you're not paying attention. You could be standing in acres of pulsing blue and see absolutely nothing if you're lost in your own panic, grief or rage.

So I say — at least in my finer moments — the hell with that! I love blue flowers. And I can't live without the magic.

So bartender, make it a moxie. Straight up. On second thought, make it a double.