Accessibility links
Elliott Carter at 100: A Trio of Tributes American composer Elliott Carter celebrates his 100th birthday this month, and three new CDs have been released in honor of the occasion. Fresh Air's classical music critic has a review.

Listen
Elliott Carter at 100: A Trio of Tributes

Hear these seminal pieces by Carter, recorded at various points throughout his long career.

Suite From Pocahontas (1936): 'John Smith And Rolfe Lost In The Virginia Forest'

'Interventions' For Piano And Orchestra (2008) (excerpt)

Hear performances from this summer's Elliott Carter Centenary Celebration at the Tanglewood Music Center in Massachusetts.

In The Distances of Sleep: 'Metamorphosis' (Kate Lindsey, soprano) 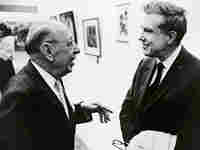 Elliott Carter (right) with Igor Stravinsky. Carter was inspired to become a composer after hearing Stravinsky's Rite of Spring in 1924. Courtesy of the artist hide caption 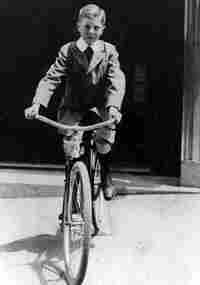 The young Elliott Carter, in 1917. Courtesy of the artist hide caption 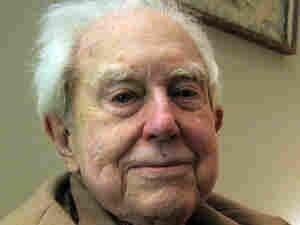 Think of it: He was born in 1908, the year Henry Ford introduced the Model T. Yet Carter's memories remain vivid. He remembers New York streets devoid of "motorcars," as he still calls them. And he recalls moving to 420 Riverside as a child and looking out at the river.

"The Hudson River was full of English warships," he says. "I remember that very distinctly."

They were there because of WWI. Carter was 9 when the war finally ended. Not long after, he and his father went to Europe.

"It was absolutely devastating to me," he says, "because we not only went to see the famous battlefields of Verdun, but we also went to Germany, when the waiters stole food off the table when we ate. I remember that impressed me as a boy very much — this awful poverty that Germany was suffering from."

Elliott Carter was at the 1924 New York premiere of Igor Stravinsky's Rite of Spring. From that moment, he says, he wanted to be a composer. His parents did not approve — how many times have we heard that? Carter's father had a business importing lace curtains from Europe and hoped his son would take over the business. His parents were not musical.

"My mother did have one of those player pianos that had a paper roller," Carter says. "And we did have some Chopin things, and I played them, but I didn't like them very much. Later, on one of my trips, I bought piano rolls that Stravinsky had made. And also George Antheil's Ballet Mecanique was on a player piano roll. That drove my parents crazy."

In perhaps his first effort at composing, Carter took a blank roll and poked some holes in it. He says it sounded awful.

Carter likes to say that he started music from the wrong end — he didn't like Beethoven back then. He wanted to be a modernist. To learn how, Carter went to Harvard, which wasn't what he'd expected.

"[The] Harvard Music Department at that time was entirely devoted to teaching church organists how to work," he says, "and it was pretty hard for them to find anything [worthwhile] about modern music — they didn't like it and didn't feel it belonged anywhere. And at that point, I decided I'd better study English literature."

That study produced his undergraduate degree. He did meet other like-minded souls at Harvard: Alfred Barr, who became the first director of the Museum of Modern Art; writer James Agee; and Lincoln Kirstein, who went on to found the New York City Ballet. Carter landed some of his first jobs as a composer writing music for Kirstein.

Paris And Another War

Another Harvard connection sent Carter to Paris. One of his professors, composer Walter Piston, recommended that he work with famed teacher Nadia Boulanger.

"I arrived to study with Nadia Boulanger at the time when Hitler had the Reichstag fire — when he took over the government," Carter says. "Paris, throughout almost my entire three years, was filled with German refugees. It was a very tragic and terrible time. And I remember, in fact, at the end of it, I felt I never wanted to go back to Paris."

Carter returned to the U.S. and began composing what he calls "American music," inspired by the spirit of the times — and jazz.

"I remember my First Symphony, which is rather conservative and somewhat jazzy, was played down at Cooper Union," Carter says, "and Duke Ellington was in the audience. And he came back and said, 'It seems to me, Mr. Carter, you're interested in jazz.' "

And he was. He heard pianist Art Tatum play on 52nd Street and later became a fan of Thelonious Monk. But after the war, his music changed — beginning with his Piano Sonata of 1946. Carter says he wanted to reclaim the modernist sensibility that first inspired him to compose. In 1948, he wrote his Cello Sonata for Bernard Greenhouse, who went on to co-found the Beaux Arts Trio.

"The Cello Sonata was extremely modern at that time," the composer says. "I could not get it published. And Bernard Greenhouse and his pianist played the first performance at Town Hall, and they were covered with sweat. It was so upsetting and so disturbing — we had hardly anybody in the audience. If they heard what I write now, they would run out of the hall screaming, I suppose."

They practically did back then. Walkouts were common at Carter concerts. One reviewer called Carter's music "chaotic and meaningless ... and hopelessly intellectual." But sweat and screaming might just be OK at a Carter show, says cellist Matt Haimovitz, who's known for taking Bach into rock clubs.

"If you're coming to hear a punk band, I actually think there's such an energy and wonder in his music; an adventurous listener can really get a lot out of it," Haimovitz says. "You go back to some of the earlier works, which are so astonishingly beautiful, like the Cello Sonata; you know, it's amazing. We'll play a Beethoven sonata, and then we play the Carter sonata, and people don't complain or walk out anymore."

Musicians seem to relish the challenge of playing such intensely individual works. Carter has steadfastly followed his own path — paved in part by an interesting paradox. The composer says he creates in response to the world around him, but he's composed some of his most significant works in isolation. Pianist and author Charles Rosen points to Carter's first string quartet — begun in 1950, when the composer sequestered himself in Tucson, Ariz.

"He decided the hell with everything; he was just going to write a piece that pleased himself," Rosen says. "And the result was quite astonishing: It suddenly got into the repertoire of many quartets. Everybody wanted to play that piece."

"The idea was that the total effect would be something that would make a unified piece," Carter says, "even though all the individuals are being individual. And of course that's the symbol of the society that we hope we're living in. We're not so sure anymore."

Carter is still responding forcefully to the world around him, says James Levine, music director of the Boston Symphony Orchestra and the Metropolitan Opera.

"Elliott [has], even now at 100, a fantastic vitality and a fantastic youthful view of things," Levine says. "He's literally still in his prime. He's writing just one marvelous, original new piece after the other."

Carter has composed an opera, works for piano and orchestra, brass quintet, solo bass clarinet, viola and bassoon — an astonishingly wide variety of voices. Yet each of them is distinctly Elliott Carter.

With three new works getting premieres over Carter's centennial week alone, and more on his desk, not bad at all.