Accessibility links
Gender Barrier Persists At Vancouver Olympics Ten female ski jumpers from six countries are suing to get into the 2010 games. They argue that the Vancouver Organizing Committee for the 2010 Olympic Winter Games is violating the Canadian Charter of Rights and Freedoms by staging ski jumping competition that excludes women. 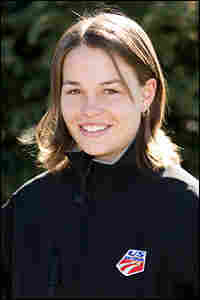 Lindsey Van, 24, has been ski jumping since age 7 and now ranks among the world's best. She won't be able to jump at the 2010 Olympics in Vancouver because Olympic ski jumping is closed to women. Courtesy of Scott Sine hide caption 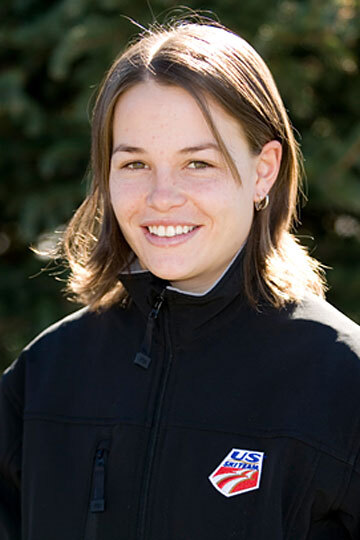 Lindsey Van, 24, has been ski jumping since age 7 and now ranks among the world's best. She won't be able to jump at the 2010 Olympics in Vancouver because Olympic ski jumping is closed to women. 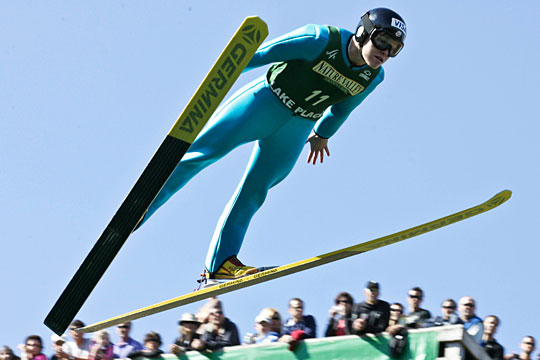 Written statement provided to NPR by the Vancouver Organizing Committee for the 2010 Winter Olympic and Paralympic Games on Dec. 1, 2008:

"This is a matter that is currently before the courts and understandably we can provide no new comment.

As we have stated in the past, in advance of the IOC's decision (Dec. 2006) not to include women's ski jumping for 2010, we supported the inclusion of women's ski jumping and communicated to the IOC that if they elected to add the event at that time, we would and could support it from a logistical and operational standpoint. We recognize that efforts are continuing by some to raise the profile and awareness of the issue, however, neither the facts nor our position have changed — it is not our decision to make. The final decision lies with the IOC, and we respect and accept the IOC's decision regarding women's ski jumping.

We encourage the women ski jumpers to focus their efforts on 2014 and we look forward to continuing to host them at Whistler Olympic Park for training."

Excerpts from a written statement provided to NPR by the International Olympic Committee on Nov. 19, 2008:

With too few athletes competing in this event, and no World Championships until one year before the Vancouver 2010 Olympic Games, Women's Ski Jumping does not reach the necessary technical criteria and as such does not yet warrant a place alongside other Olympic events. With the technical merit of the event unchanged, the decision taken in November 2006 stands. ...

The IOC would like to stress again the decision not to include Women's Ski Jumping has been taken purely on technical merit. Any reference to the fact that this is a matter about gender equality is totally inappropriate and misleading.

No man or woman has flown farther than American Lindsey Van off the K90 ski jump built for the 2010 Vancouver Olympics. Van holds the distance record at the K90 hill in Whistler, British Columbia.

But Van and other women contend they are barred from the 2010 games simply because they're women.

Ski jumping is the last Winter Olympics sport closed to women. So Van and nine other women from six countries are suing to get into the 2010 games. They argue that the Vancouver Organizing Committee for the 2010 Olympic Winter Games is violating the Canadian Charter of Rights and Freedoms by staging ski jumping competition that excludes women.

"[It's] just pretty painful to watch [men] I grew up training with be able to have that opportunity and me sit there knowing that I don't even have that opportunity because I'm not a male," says Van, of Park City, Utah, who has been ski jumping since she was 7. "It's depressing to tell young girls that you don't have the same opportunities just because they're girls."

"If the men are going to jump the women have to jump. And if the women aren't going to jump then the men can't either," says DeeDee Corradini, who served as the mayor of Salt Lake City during its bid for the 2002 Winter Olympics and is president of Women's Ski Jumping USA.

Corradini describes the legal reasoning behind the ski jumpers' lawsuit, which is now before the Supreme Court of British Columbia.

"VANOC is a quasi-governmental entity. If you look at the composition of their board [and] if you look at who's funding all of the venues in the Olympic Games, it's the federal and the provincial and local governments," Corradini contends. "And therefore, under Canadian law, [VANOC] is subject to the Canadian Charter of Rights and Freedoms, which prohibits discrimination."

VANOC declined interview requests for this story, but its officials have blamed the International Olympic Committee, which voted two years ago to keep women out of the Vancouver ski jumping competition.

"We have, obviously, put the IOC in a position that they could, if they'd made a decision to put this on the program, we would have attempted to accommodate it," said VANOC CEO John Furlong in an interview with the Canadian Broadcasting Corporation in May. "But the frustration is it's not our area of jurisdiction at all."

That is not a credible argument to Margot Young, a professor of law at the University of British Columbia.

"The games have to be run according to Canadian law when they're on Canadian territory," Young asserts. "I don't think VANOC can say 'Well, the International Olympic Committee made us treat women unequally.' So, I think the IOC and what it believes is essentially irrelevant if the event's being held in Canada."

The International Olympic Committee did not respond to interview requests for this story. But IOC President Jacques Rogge spoke to the CBC during a visit to Vancouver in May.

"To become an Olympic sport, a sport must be widely practiced around the world, universal, and have a big appeal," Rogge explained. "This is not the case for women's ski jumping. So there is no discrimination whatsoever. They did not pass the technical mark. That will change in the future. We have no doubt about that. But today they're not ready for it."

Corradini says Rogge and other IOC members are grossly misinformed. She says more than 80 women from 14 countries were competing at the elite ski jumping level when the IOC's executive board voted in 2006 to keep women's ski jumping off the 2010 schedule.

"If you look at the facts of ski jumping versus other sports that we should be compared to, which are luge, skeleton, bobsleigh and ski cross, in particular, we have more women and more nations competing at the elite level than any of those sports did when they were admitted," Corradini adds.

'They're Not Good Enough'

The IOC's rejection angers Anita DeFrantz, one of the few women on the IOC and chairwoman of the committee's Women and Sports Commission. She's an African-American and former Olympian herself who has tried to open more Olympic sports to women. And she doesn't understand why her fellow IOC members won't include women in the Olympic ski jumping competition.

"The words I heard were, 'They're not good enough,' " DeFrantz recalls. "I've heard that before. I understand discrimination very well. And this is a nearly textbook case of discrimination."

Some believe the IOC chose the new Olympic sport of ski cross for the 2010 games, and passed over women's ski jumping, because ski cross will attract younger television viewers enticed by so-called extreme sports. Television is the biggest generator of revenue for the Olympics, and young people immersed in extreme sports are coveted by television sponsors and Olympic organizers.

Ski jumpers consider their sport one of the original extreme sports. And it's long been part of the Olympics. Men have been jumping in the games since the first Winter Olympics at Chamonix-Mont Blanc in 1924.

DeFrantz notes that some women used to jump disguised as men, and some have dominated the sport, sometimes jumping farther than men. In fact, American women do so well in international competition that the U.S. Ski Jumping Team does not include any men.

None of that may matter to the judge at the Supreme Court of British Columbia, who will hear arguments in the lawsuit in April. The case will come down to interpretations of the Canadian Charter of Rights and Freedoms and whether it applies to VANOC and the 2010 Olympics, says law professor Margot Young.

"When it comes to organizations like VANOC, it's just not clear," Young says, despite government funding, government control and the staging of the Olympics as government policy. "The case law is contradictory and unpredictable. It's not a slam-dunk. It's a complex argument. I wouldn't bet on the result myself."

DeFrantz is usually reserved when she speaks of the IOC, where she has represented the United States since 1986. "It makes me feel embarrassed that our organization, which is built on mutual respect and fair play, is doing this to a group of women," DeFrantz admits. "It's just wrong."

Ski jumper Van is hoping the IOC or the Supreme Court of British Columbia will still open the 2010 competition to women, so she can fly into history as one of the first women to break the final gender barrier in the Winter Olympics. Van is 24 now, and 2010 is her last chance at the Olympics.

Watch Van Set The Distance Record At The K90 Hill In Whistler, B.C.

The Canadian Charter of Rights and Freedoms
Women's Ski Jumping USA
The upcoming documentary "FLYgirls."
The Vancouver Organizing Committee for the 2010 Olympic and Paralympic Winter Games
The International Olympic Committee