Accessibility links
Former Gang Member 'El Cholo' Speaks Out 'El Cholo,' as he is called here, is 20 years old. He has been a member of different gangs — or maras — and says he has killed 10 people. Following are excerpts from an interview with NPR's John Burnett. 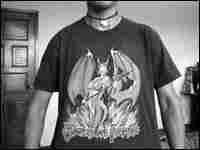 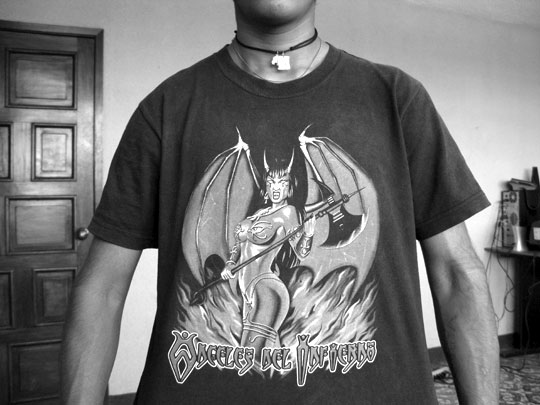 El Cholo, as we call him here, is 20 years old. He has been a member of different gangs — or maras — and says he's killed 10 people. Following as excerpts from an interview with NPR's John Burnett.

I've been in maras since I was six. I grew up in the streets. My first gang was Bikingo. I grew up with them, they taught me arms, fighting, drugs, communication, contraband. I grew with this mentality. When I had learned it all, I went my own way, surviving alone. I went to the 13 gang, then the MS-18, then with a gang called Braker, then with Black Star, the Saldiver gang, now I'm a Roquero.

We listen to satanic music and do satanic rituals, and we play the Wuija, a game of the devil. It's how one comes to know the devil. To know him you have to give him your soul. You need money, food, you want to be rich. The devil comes and he says, "Okay, I want something of yours and I'll give you everything." You come and give him your soul. "Here's my life, it's all yours, but I want you to give me money, I want you to make me famous." He comes, gives it, and you're better for it.

But there are dangers, such as death. If you die, you lose everything, including your family by means of these satanic games.

My mother is Costa Rican and my father is from the U.S. I was born in the U.S. They had problems with drug trafficking, and they decided to come here to Guatemala. They decided to leave me here in an orphanage because of their problems. I grew up there, then I was adopted by foster parents. But I didn't like life with them, so I chose the life of the streets when I was six.

When I joined the Bikingo gang, they taught me how to use weapons and be in a gang. Later, I joined Mara 13, the Salvatrucha. I was with them. I learned how to survive there.

There are lots of gangs and how they survive is asesino al sueldo, kill for a paycheck. A person who needs money has to kill another person. They come, kill a person, take his money and that's how they survive. Or they survive violating people, kill them, kidnap them, assault banks, rob people in the street, and sell drugs. That's what gangs to, and I did it too.

I was 10 years old when I entered Mara 18, I learned how they dress and how they live in the streets. But there's a problem between 18 and Mara 13, they can't be together. They're not the same gang. If a 13 arrives at the house of an 18, the first thing is there's a massacre. Thirteen and 18 are rivals.

I've killed 10 people, all adults. I killed six gang members and four victims of crime. I killed the last one four months ago. He was causing problems in my gang. They paid me to eliminate him.

I also sell candy and cookies in the streets, and in buses. Now I've left the gangs. Now I'm a Roquero. Of all the Roqueros in the world, 75 percent worship the devil. The other 25 percent don't. I don't worship the devil. I left all that satanic stuff. I'm on my own, I don't mess with the devil anymore.

To dedicate your soul, you have to make a mark of the three 6s. I have them on my chest. There are women who get involved in satanic rites. They make a star of six points: salt, ash, cemetery dirt, bone dust, black candles and blood. Through magic, when the fire comes the devil is present. They have to do this ritual in the cemetery. Lots of people need money, they need protection, and that's why they do it.

I've done human sacrifice twice. I sacrificed a family of 13 through black magic. We made a voodoo doll, we stuck it with needles, and the person it represents dies easily.

There's a satanic game called Pedro, it's a computer game. How are you dressed? What color is your shirt? Your shirt is black. He responds as if he's in the computer. If I lose, Pedro wins, and he takes my life. Pedro is the devil.

There was this woman who threatened my life. I wouldn't permit it. I said before you get me, I'll get you. I made a voodoo doll with a piece of her pants. I went to the cemetery. She sacrificed herself on her own. She cut her own veins with a machete.

We came, we did our work. She died, we took out her brain, heart, lungs — the most valuable parts. We cut the heart into 14 parts — one piece for each of 14 of us. Our objective was to eat the heart raw. If we didn't eat it, the devil would kill us or harm us, or our families. We had to do it. She was 38 years old. We dumped her body in a river. This was when I was 15, in 2003. I was with the Braker gang then.

Do I feel any guilt for the people I've killed? No, if I committed an error, then sooner or later I'll pay for it. That's why I don't feel guilty to have done it. I feel normal. To survive in this world you have to do everything, including even taking the life of another. You have to do everything in this life in order to survive. That's what I did.

In one sense, they're right (referring to the rise of vigilantism and the targeting of gang members for death). There are many innocents who've died at their (the gangs') hands. The people are tired of the gangs. Many people are tired of me. I'm now an ex-gang member. Two years ago, I left the gangs when I was 18. Today I'm a street vendor. People respect me.

There've been lots of deaths from the gangs. You find bodies in the rivers, mountains, barrancas. Many women have died because they belong to gangs. There are women who get killed during rapes. There are gang members who like to rape women and then kill them. There are women who because of their marital problems end up dead. Also they kill prostitutes. I know lots of prostitutes. Lots of them work by the train tracks, in Zona 6 and Zona 3 and along 18th street there are lots of prostitutes. Some are killed for giving a disease to a man.

I wanted to get out of the gangs to save my life. You have to fight to stay alive. Now I believe in the world of God. I have my Bible. That's why I left the gangs.

I met a Jehovah's Witness in the street. He told me everything I was doing was an error. Now I believe in the word of God and I decided to change my life. I know that I've caused much grief to families. They'll celebrate Holy Week and Christmas without their loved ones who I killed. The families of the 10 I killed are sad. I did it for amusement, money or drugs.

I know I was wrong. Now I start to tremble when I think that I killed someone. I could go to prison or somebody might want to kill me for revenge. Today, I'm afraid. I could pay with my life for my errors, as we say, pay with the same money.

I know lots of people the sicarios (hired gunmen) have killed — Scrappy, Carlos Bran, El Diablito, Cholo, Scooby Doo, Pantera, Flaco, Guzman, Magoo. I've known 50 people who've been killed by sicarios this year. More in years past. They were all in gangs. They were famous. It's an honor, a medal of gold for all they've done with us. They helped form the gangs. They were our leaders.

The mistake the sicarios make is to think killing the leader will make a difference. Another leader comes up. His right hand man moves up.

Today a lot of gang members do (fear the backlash of community vigilantes.) It's not the same as before. They know well that, sooner or later, they can be eliminated. Gang members who have piercings or tattoos know they should hide them. Or leave this place, because they know the sicarios won't give 'em a second chance. The sicarios are there to clean up the community.

In my case, when I go out the first thing I do is take out my piercings and cover my tattoos, to look like a decent person. For the fear of being eliminated. Thanks to God I've been a street vendor for two years. Now I like to earn an honest living.