Accessibility links
Reliving An Ancient Tradition ... In Movie Theaters Commentator Marc Acito has been going to the movies on Christmas Day for close to 30 years. Back then, it was just him, his brother and his father in the dark theater. Now, the multiplexes are crammed full of folks by the flickering light of the movie screen. 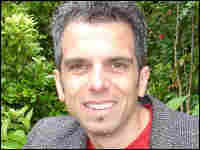 Gather round the fire, boys and girls, while I tell you a tale of Christmas past — of a time when families stayed at home on Dec. 25 and didn't go to the movies. I know it's hard to believe. Walk into any multiplex in America on Christmas Day, and it's more crowded than a Tokyo subway, packed with stir-crazy revelers who've overdosed on eggnog and Uncle Louie telling you to pull his finger.

But it wasn't always this way.

In 1979, when I was 13, my parents divorced. In a move that was unheard of at the time, my father got custody. And my mother, well, she got custody of Christmas. Because, as we quickly learned, holiday magic doesn't happen without a mom to act as magician.

So we went to the movies and saw Kramer vs. Kramer, a film about a mother who leaves her son to be raised by his father.

And a happy New Year!

Back then, no one went to the movies on Christmas. I mean no one. You could shoot a cannon through the place. We wandered the aisles, changing seats and yelled back at the screen like it was The Rocky Horror Picture Show. It felt subversive, almost forbidden, and I loved it. You see, family can let you down; they can disappoint you or walk out on you when you need them; but as long as there are Jews in the world, there will be movies on Christmas.

When I grew up, I, too, moved out of state and fell in love with one of God's chosen people, who not only shared my holiday habit, but taught me the sacred Hebraic tradition of ordering Chinese takeout. Over the years, we've established a few ground rules. For instance, friends and family are welcome to join us, but we treat them like rogue nations: There's no negotiation. After suffering through Kindergarten Cop in 1990, my partner and I always choose the movie.

We select our Christmas movies as carefully as others assemble their Christmas lists, often opting for themes, like combining Dreamgirls with The History Boys. Or Sweeney Todd with There Will Be Blood, the latter describing the former. This year, we're especially festive with the wintry-sounding Frost/Nixon as well as Seven Pounds, which is exactly how much I will gain by New Year's.

Each Christmas, I look around at the crowds of people who used to stay home and wonder if it's some reflection of our fractured families, a sad commentary on our disconnected communities. Or perhaps it's just a new version of a tradition even older than Christmas itself.

Long before the birth of Jesus, civilizations celebrated the winter solstice by burning fires to urge the sun to return. The practice continues today, as we brighten the darkest nights of the year with holiday lights. So is it really so strange that we gather together to watch a screen flooded with flickering light?

Still, every December, someone with visions of sugarplums dancing in their heads looks at my holiday movie tradition with such pity you'd think I was Tiny Tim. Or even worse, Scrooge. But for me, any excuse to exchange silver bells for the silver screen makes me as happy as, well, a kid on Christmas.

Writer Marc Acito lives in Portland, Ore. He is the co-author of the twisted Christmas comedy, Holidazed.