Accessibility links
No Gelt, No Glory: A Dreidel Champion Is Crowned Dreidel spinners like Debbie Does Dreidel and Jewbacca take on defending champion Pamskee in the Major League Dreidel Championship in New York City. The target? To beat 17.8 seconds.

Listen
No Gelt, No Glory: A Dreidel Champion Is Crowned 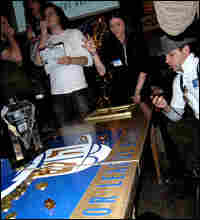 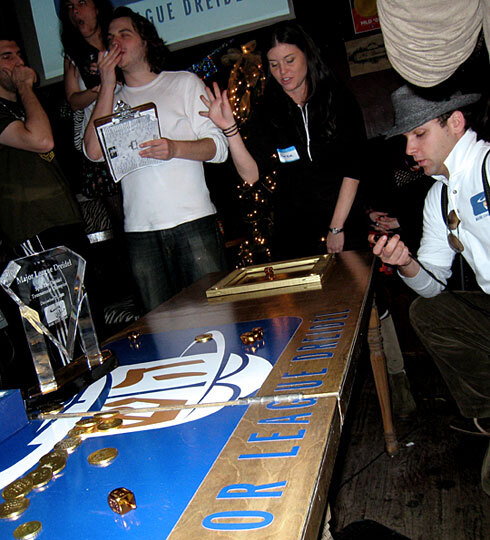 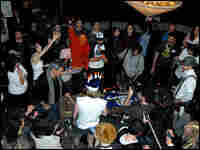 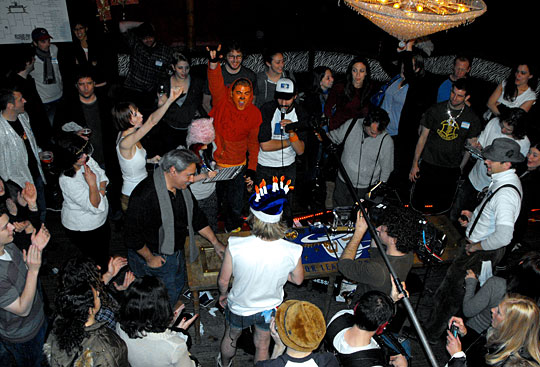 Virtual Dreidel beats Pamskee for the 2008 title — and the glory.

Watch a video of the championship. When you go to the link, click the "media" button.

The competitors hunch over the tables, cracking fingers and stretching their wrists. It's the first night of Hanukkah, and only one person can take home the crystal dreidel-shaped trophy. The Major League Dreidel championship is on.

The legends of the game arrive early at a bar on the Lower East Side of Manhattan. With nicknames like Debbie Does Dreidel and Jewbacca, this is no longer a sport for children.

The "knishioner" of Major League Dreidel, Eric Pavony, points out that this is not your rabbi's dreidel. In the traditional Hanukkah game, the spins are left up to chance — and only luck can win you the chocolate coins known as gelt.

But Pavony came up with something a little more challenging: Spinners compete on how long their dreidel spins on progressively smaller surfaces. On the "Spinagogue," as they it call it, only skill can bring home the gelt.

Everyone has a technique. Tasmanian Dreidel spins with his whole body. Dre-idol has covered his fingers with wax and plans to spin the top upside down. But Pamskee sets the standard. She uses only the barest of movement with her fingertips to get her world record spins.

The night starts with 64 competitors set up in brackets. It's like the NCAA, Pavony says, except more Jewish.

By almost midnight, there are only two left: Pamskee and the runner-up from last year's competition — the man known as Virtual Dreidel. As the crowd pulls in, it starts chanting "spin, spin, spin, spin."

Virtual Dreidel removes his scarf, looks across the table at Pamskee and nails a perfect spin to the center with a time of 15.4 seconds. He carries the dreidel over to her. She flubs the first spin, then recovers with a beauty. Everyone looks to the judge who calls out her time: 12.1 seconds. There is a new dreidel champion.

Howard Pavony says his secret to a long, long dreidel spin is to remain calm, and not show emotion. It's like the holiday of Hanukkah itself, he says. Just as the oil in the temple burned for eight days, so too a great dreidel player has patience and spirit.

Unfortunately for the champion basking in glory, Major League Dreidel has the shortest season of any professional sport. It's over and forgotten by the time that last Hanukkah candle is lit. But Eric Pavony would like to see it go a little longer. Dreidel for New Year's Eve, anyone?