Accessibility links
Fed Up, Ordinary Guatemalans Turn To Vigilantism Anger over rampant crime has led to widespread vigilantism in Guatemala. In the provinces, citizen patrols are taking justice into their own hands — including setting suspected gang members on fire. Human-rights monitors are alarmed. 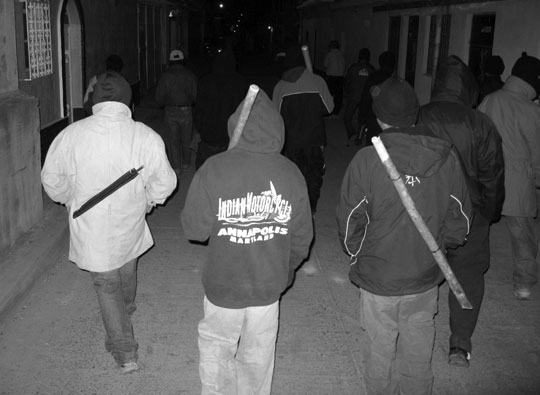 Night patrollers in San Juan Sacatepequez, Guatemala, say their rounds have chased away the gang members. 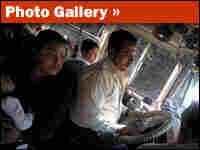 The killing of bus drivers is common in Guatemala as local gangs extort fees from drivers. Here, driver Werner Ramirez heads to the funeral of fellow bus driver and company owner Jesus Ubaldo Munoz. Munoz was gunned down in front of his house on the outskirts of Guatemala City. Jon Lowenstein/NOOR hide caption

A bus rests on a street after the murder of its driver and his assistant. Jon Lowenstein/NOOR hide caption 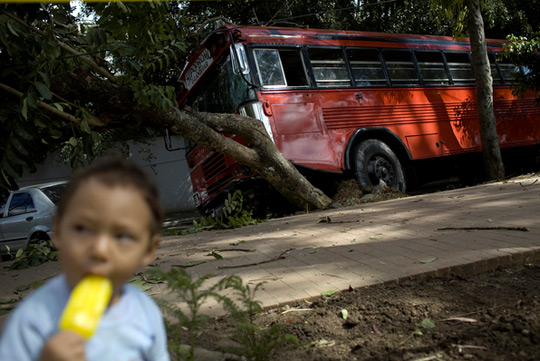 A bus rests on a street after the murder of its driver and his assistant.

It is so common for buses to be attacked that owners often don't bother to repair them. Jon Lowenstein/NOOR hide caption 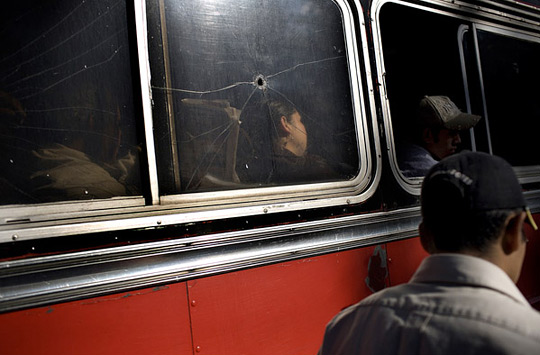 It is so common for buses to be attacked that owners often don't bother to repair them.

Part 1 reports on gangs in Guatemala and the sicarios — or hitmen — hired to kill their members.

"El Flaco" describes his life as a gang member. The 26-year-old claims to have murdered 22 people. Read excerpts from the interview.

"El Cholo" is 20 years old. He has been a member of different gangs — or maras — and says he's killed 10 people. Read excerpts from the interview.

Warning: These interviews are graphic and some may find parts of them disturbing.

Assassins On Their Roles

Christian and Roberto are sicarios, or assassins. Christian left the National Civil Police in April 2008; Roberto left the police in 2000. As sicarios, they estimate they've killed two dozen people between them. Read excerpts from the interview with them.

In Guatemala, anger over rampant crime and distrust of the police has led to widespread vigilantism. Though the practice is alarming to human-rights monitors, the public is applauding the efforts, saying they are finally cleaning up their towns.

Last year, the working-class Mayan town of San Juan Sacatepequez, Guatemala, was overrun with street gangs. Extortionists reportedly went through the phone book — name by name — demanding money and threatening violence against families that didn't pay. Residents complained of an impotent police force and a justice system that releases criminals back into the population.

Taking Back The Streets

Fourteen months ago, the people of San Juan Sacatepequez took matters into their own hands. Every night, men gather in the plaza to go on patrol with machetes, truncheons and two-way radios. On a recent night, a group of 20 men — bundled against the mountain cold, some in balaclavas — walked the darkened, hilly streets of their sector.

The patrol leader, a local veterinarian nicknamed "The Jackal," says the gangbangers have mostly left San Juan Sacatepequez, and their security patrols have been so effective that other cities now want to copy them.

"Right now, nothing happens anymore because they know we're patrolling at night," says The Jackal. "If the delinquents try to rob anyone during the day, everyone in the marketplace has whistles to sound the alarm. And everyone comes out and captures the thief."

And what happens then?

The patrol leaders say they hand the thief over to the police. But San Juan Sacatepequez's police chief, whose officers have effectively been marginalized by the citizen patrols, says there have been six vigilante killings in the 10 months he has been on the job — and an attempted lynching last month. Townspeople caught two Nicaraguans they said were thieves. They tied the men up, stripped them, beat them bloody, and paraded them around town.

"They were at the point of pouring gasoline on them and setting them on fire. But it was avoided when the police intervened," says Arbol Pavilla, local representative of the Office of the National Human Rights Ombudsman. "They were lucky. I saw the gas can with my own eyes."

At midnight, a cafe owner invites the patrol in off the streets to warm themselves with coffee and tamales. The owner, Osmar Mancilla, sits by the griddle and considers how things have turned around in San Juan Sacatepequez.

"I have a brother-in-law who had a bad experience with extortion. It was a type of terrorism; they had him afraid all the time," Mancilla says.

"There was so much insecurity in the streets. When you'd leave your house, you never knew if you'd ever return. Since they started these patrols, thank God, things have changed. There's more tranquility," he says.

Did the street gangs flee San Juan Sacatepequez because of the night patrols' presence, or because of the message sent by the vigilante killings — in which gang members were publicly incinerated?

"It's sad, because I think there's divine justice, and the only one who can take a life is God. But there are extreme circumstances. If the police protected the population, there wouldn't be the need for these measures," Mancilla says.

Back out on the street, a burly patroller in a ski mask, nicknamed "El Chino," says, "These people are human garbage. We don't want them around."

A few years ago, the Guatemalan government — frustrated at its police force's inability to control the gangs — encouraged limpieza social, or social cleansing. It was an overt message for communities to organize and dispose of gang members, whose numbers are today estimated at 80,000. What happened, wrote a newspaper columnist recently, was the creation of a societal "Frankenstein."

"The state cannot be plunged into a situation where there is no rule of law. We have a saying: The medicine can be worse than the illness," says Interior Minister Francisco Jimenez. "Social cleansing doesn't solve problems, because the result is impunity."

Jimenez says Guatemala is opening new academies to beef up its police force, which is currently less than half the size needed for a country of 13 million. Human-rights monitors accuse the police of condoning social cleansing, if not actually participating in it.

Meanwhile, Guatemala's wave of vigilantism is having its desired effect.

"We don't mess with the people in the provinces," says a 26-year-old former member of the notorious Mara Salvatrucha gang. "In San Juan, Xela, San Lucas, they're united. If they catch you, they'll pour on gasoline, light a match, and that's it."