Accessibility links
Rosie Thomas: A Very Quiet Christmas Thomas performs stand-up comedy in her spare time, and sometimes between songs. But her new album, A Very Rosie Christmas, is often thoughtful — even reverent. Her music is gentle, sincere and just right for those who wish the holidays were a little less noisy.

Rosie Thomas at World Cafe Live in Philadelphia on Nov. 30.

"Much Farther to Go"

"Why Can't It Be Christmastime All Year?"

In a concert recorded at the World Cafe Live in Philadelphia on Nov. 30, Rosie Thomas takes a break from music to perform a bit of stand-up comedy in a high, squeaky voice. 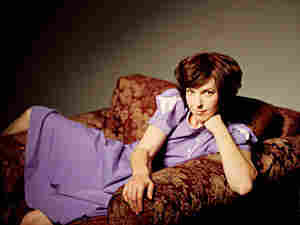 "My dad filmed us trimming the tree," she says. "And if you ever want to watch it, it's about four hours long, and it's really, really insightful. We never put that tape in ever again; what a waste."

But Thomas is best-known as a singer who only tells jokes in her spare time — or between songs. Her new album is a serious record called A Very Rosie Christmas.

Thomas is originally from Michigan, as is her sometime collaborator, Sufjan Stevens, who's released many holiday songs of his own. Both singers are generally lighthearted, but when it comes to Christmas, their music is often thoughtful — even reverent.

Now, there is a comedy skit at the end of A Very Rosie Christmas. But the rest is gentle and sincere — just right for those who might wish the holidays were a little less noisy.