Accessibility links
Olympia Dukakis, Finding Clarity 'Away From Her' In a new film about love and Alzheimer's, the disease that claimed her mother, the Oscar-winning actress co-stars as a hard-edged woman who has "kind of given up on life" — until she meets a man caught in a crisis of his own.

Listen
Olympia Dukakis, Finding Clarity 'Away From Her' 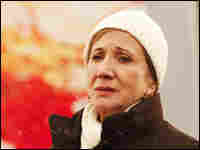 Olympic Dukakis plays a woman caring for an incapacitated husband in Away From Her, the directorial debut from actress Sarah Polley. hide caption 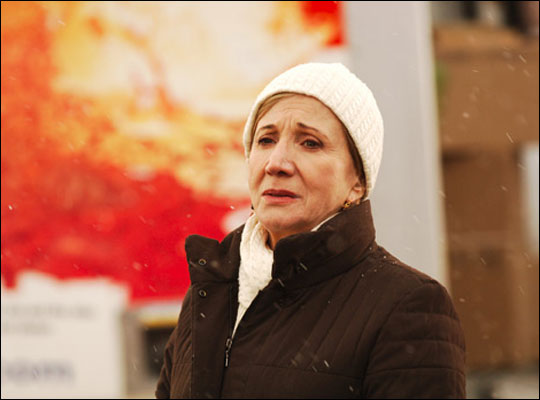 Olympic Dukakis plays a woman caring for an incapacitated husband in Away From Her, the directorial debut from actress Sarah Polley.

From 'Away From Her'

Watch the clip Scott Simon played on the air.

The actress Olympia Dukakis won an Oscar in 1987 for playing the sharp-tongued mother in Moonstruck. She co-starred in Steel Magnolias, playing the grandly bemused widow Clairee; and in the PBS series Tales of the City, she brought to life the pot-farming, formerly male landlady Mrs. Madrigal.

In her latest film, Away From Her, Dukakis plays a character who's "kind of given up on life," in the actress' words — "on the idea that there might be happiness or intimacy for her." The woman's husband lives in a nursing home; he's mostly mute, and confined to a wheelchair.

But as so much in the husband's life narrows, he finds himself entering a new relationship with a woman (played by Julie Christie) who's been stricken with Alzheimer's disease. Meanwhile, Dukakis' character, Marian, begins spending time with that woman's husband.

While the poignancy of a couple's struggle with Alzheimer's is a major through-line in the story, Dukakis says that "what's really at the heart of this film is a love story — within the context of life, and aging."

She points out that Sarah Polley, the film's director, "has said that we care much more about the first year or two of a relationship than we do about what happens as life happens — how people then find each other and how their love is expressed" as they grow older.

"It was very frightening, and initially I was very much in denial about it," Dukakis confesses. "It took some very dramatic episodes for me to finally realize that this was a serious thing."

And yet she agrees that for all the pain Alzheimer's can cause, the disease is not without its gifts sometimes for the person who has it.

"They are pulled out of the hurly-burly of life, and there's such a deep inner reality that's going on," Dukakis says. Her mother, under the disease's influence, "seemed very connected to a lot of issues that I knew had troubled her throughout her life that she didn't give time to, or credence to.

"And now here she was, preoccupied with them," Dukakis recalls. "I almost had the feeling that she lived as long as she needed to ... maybe 'resolve' is too happy a word, but ... there was some kind of exchange that was happening."

Toward the end of her mother's life, Dukakis remembers, there was a moment of clarity.

"She said 'Oh, Olympia, I've been looking everywhere for you.' I couldn't believe it. This was after almost two years of not knowing me at all, — and we talked as honestly in that 20 minutes as I have talked to any human being."